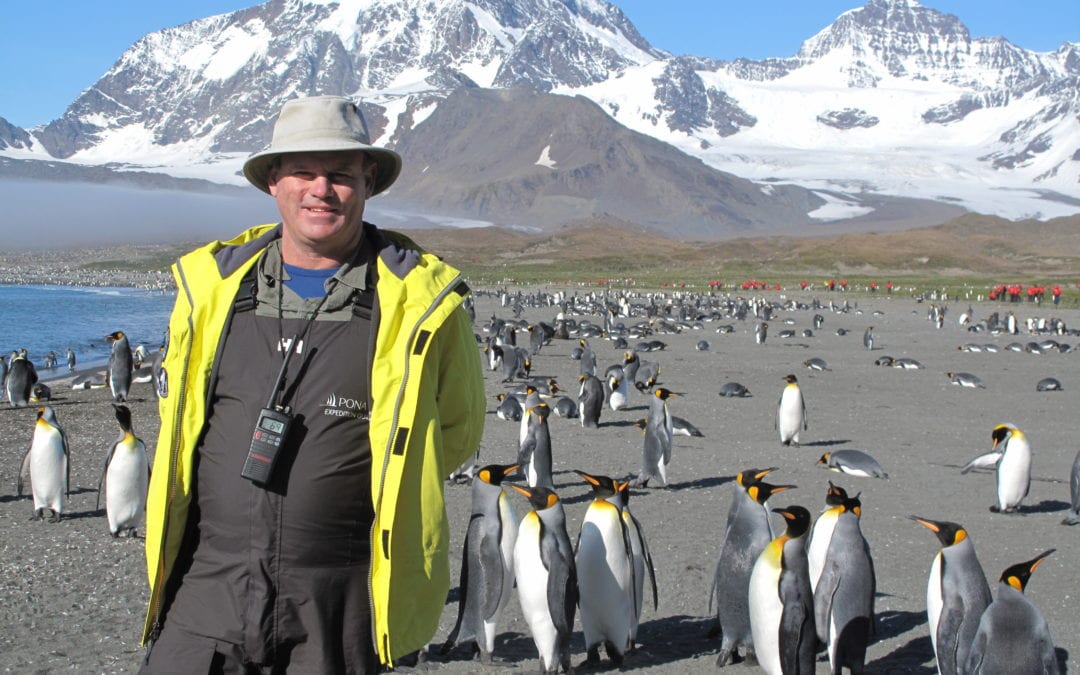 “But who wants to be foretold the weather? It is bad enough when it comes, without our having the misery of knowing about it beforehand”. Jerome K. Jerome, Three Men in a Boat.
In our case, the weather could NOT have been any better for our 3 days in South Georgia. Forecasts are that the weather and seas are going to be challenging en route to the Peninsula. For those guests who believe any talk about the weather in these parts is exaggerated, the moment of truth is coming. Early this morning, we anchored off Gold Harbour – regarded by many as one of South Georgia’s most beautiful visitor sites. A natural amphitheatre of hanging glaciers and cliffs rising straight out of the ocean, creating an extraordinary backdrop to abundant wildlife and birds. The name (Goldhaven) is derived from the iron pyrites or “fool’s gold” found in local rocks by the German Antarctic Expedition under Filchner in 1911.

Guests were taken ashore, and almost unanimously confirmed this to be THE most beautiful spot they had visited in South Georgia. A large King Penguin colony, small Gentoo Penguin colony, Fur Seals, Petrels, Albatrosses and Elephant Seals of varying ages made for a heady mix. Some were lucky enough to see the rare South Georgia Pipit – usually referred to as a little brown job. In glorious weather, and almost no wind, guests were not faced with aggressive, breeding Fur Seals and could wander at leisure soaking in this incredible vista. It was the Elephant Seals who stole the show today. Sub-adult males wrestling and vocalising, testosterone clearly coursing through their veins. Yearling, weaner pups appeared to be awaiting our arrival. They immediately approached guests in numbers, sniffing at trouser legs and wanting to make contact in whatever way possible. One insisted on climbing up my leg, at times wrapping his flippers around my leg and gentling chewing on my hand, much as a young Labrador would. Impossible to resist, particularly when they approach us. Guests enjoyed photographing penguins and seals exiting the ocean, the former often being bowled over a number of times by the waves, before gaining their balance, and footing. It was difficult ushering guests back to the Zodiacs – nobody wanted to leave.
Somewhat against the rules, I took one of the kids on board to meet my new friend, the Elephant Seal pup. The animal loved being scratched and patted, much to the kid’s delight, and she needed a lift.

Le Lyrial then steamed southwards, intending to enter Drygalski Fjord around 12.30pm. Captain Genevaz is a very precise fellow, and at 12.30 exactly we entered the fjord at the south-eastern end of South Georgia. Initially chartered by the German Antarctic Expedition of 1911/12, Dr Filchner named it in honour of Professor von Drygalski, leader of their 1901-1903 expedition. This narrow fjord has mountains and glaciers dropping into the sea on all sides. Out of the wind, it was almost balmy, as most guests took up positions outside on the decks to savour this natural masterpiece. A number of ice falls off the face of glaciers added to the scene. The Captain took us close to the face of a major glacier, before turning Le Lyrial on a ticky to retrace our journey outwards. It is always incredible when the guests are unsure as to where to point their cameras – Drygalski Fjord achieved this with ease. Bruce and Pete joined me on the decks, agreeing that there were no words for what we were experiencing. Having passed the southern tip of South Georgia, interesting mirages were viewed over Cape Disappointment. The steep, snow-capped peaks on the western side of the island leave little doubt as to why the whaling stations were all situated on the windward, eastern side, in protected bays and coves. With poorer weather in store, the Captain is running hard to get some distance covered, with 800 nautical miles ahead of us to the South Shetland Islands.

At 3pm March of the Penguins was screened in the Theatre. This beautiful movie, narrated by Morgan Freeman (is he becoming an Antarctic junkie?) highlights the life/breeding cycle of the Emperor Penguin, which nests 70 miles (110km) inland, during the depths of the Antarctic winter. The males incubate the egg, whilst the female returns to sea to feed. He waits 4 months, banking on her safe return, with food for the chick, that he may return to sea to feed.
At all stages, many birds are lost to predators, cold, starvation or age, often compromising the life of the other partner and chick. With magnificent footage, this is a movie anyone interested in the mysteries of the Seventh Continent should watch. At 4pm, Crepe Suzette’s were served with tea, much to everyone’s delight. With the Ukranian singer, Anna, providing beautiful background singing, the lounge was a fine place to be. Anna is always dressed beautifully, so I asked her boyfriend what her suitcase weighed. He told me more than 30kg, with some clothes in his bag. A lovely couple – he runs all the lights, sound and audio-visual equipment on board.

At 5pm, I told the story of Scott’s Antarctic expeditions, without any PowerPoint or visuals of any sort. The age old art of storytelling is being steadily lost, so it was gratifying to see a large turnout, and the audience clearly enjoyed this incredible saga of endeavour, ending in tragedy for Scott and all 4 of his comrades in 1912. There were many questions, before the guests were hurried out to enjoy some quality wine tasting in Le Celeste downstairs. Recaps/Precaps was hilarious with Larry and Patri hosting questions from the floor. Suzana said they were welcome to do anything on stage, except mate, whereupon Larry sidled up to Patri and put his arm around her, much as Elephant Seals do prior to mating. Larry explained how the females never wrestle as the males do, but are prone to snarling, barking and waking up grumpy!  Leonard, a child on board, brought the house down when he asked why Gentoo chick’s poop was expelled with such force in a cylindrical bag?! The behaviour of juvenile Elephant Seals prompted Patri to say that penguins (her favourite birds on Earth) are far more civilised. Suzana outlined plans for lectures at sea tomorrow, before guests enjoyed the wonderful dinner in either restaurant. I had supper with Pete and Bruce upstairs, with many laughs surrounding anecdotes thus far and fellow passengers’ behaviour. We have put our clocks back an hour tonight, which “buys” us an extra hour of sleep – for many, much needed. The Captain has warned that 5 meter swells are expected by midnight, and 7 meter swells tomorrow. Already the ship is rolling quite significantly, so the Furious Fifties may well live up to their name over the next day or so.