Up in the sky by helicopter 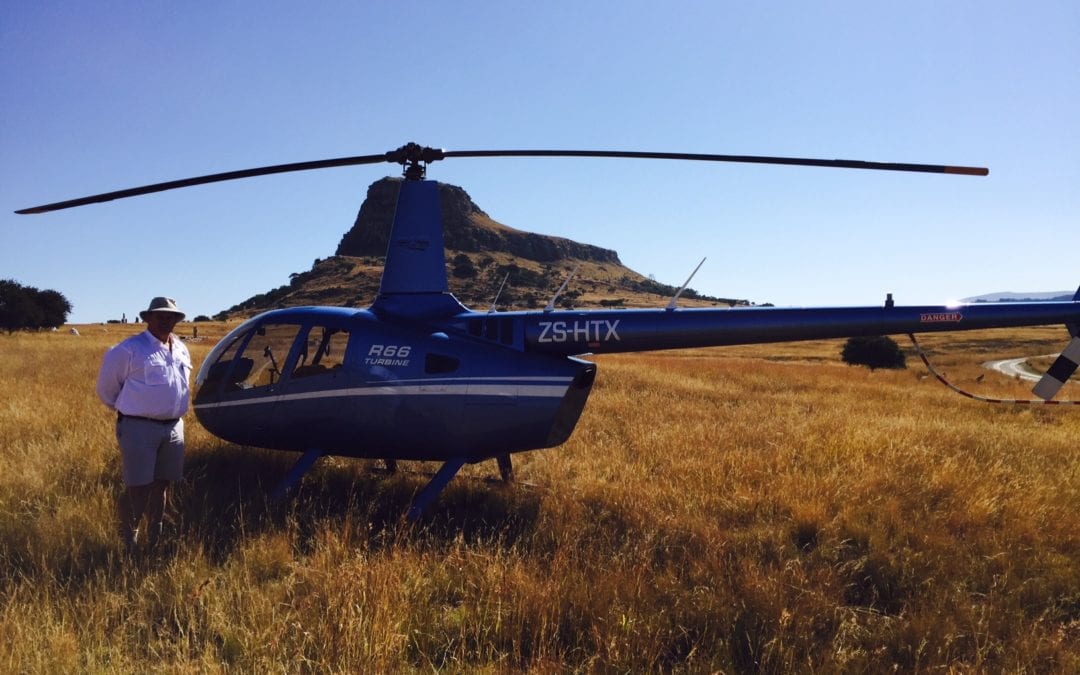 My last blog began with mention of Molefe, who still dominates local headlines, along with another terror attack in England. The world sadly is a very angry place. This was highlighted at a recent talk at Midlands Forum, by a lovely female doctor who spent time in Syria with Gift of the Givers. A sectarian war becoming a proxy war on Syrian soil, displacing more than 6 million souls – there was scarcely a dry eye present. Every time a bomb goes off, locals rush to the hospital to donate blood. With no AIDS or STD’s to speak of, the blood is ready to transfuse immediately. Rosanne’s talk certainly shifted my perspective on Syria, and the Sunni/Shi’ite conflict.

The Midlands Forum, headed up by inimitable Mary Carlisle, attracts fantastic speakers to Howick. Previously I listened to Tristan Dickerson, the remarkable young ranger who single-handedly has created fake Leopard fur for sale to Shembe devotees, and others who adorn themselves with Leopard fur. His initial roll of 3000 meters was not correctly coloured, so a team sat down with kokhi’s and began to colour in the spots! This fellow is probably doing more to save Leopards than other efforts combined. I am ashamed to admit that I had never even heard of him, although I knew about the fake fur from China.

The talk in Port Elizabeth went very well after the flight was cancelled from Durban, so I was re-routed via Johannesburg, arriving an hour later than the talk was planned. The pre-dinner talk became and after-dinner talk in St George’s Club, and locals confirmed why PE is considered the “Friendly City”.

Mike Day and his loyal Durban History Group joined me for a jaunt to Blueberry Hill Cafe’, Spring Grove Dam, Mearns Barrage, Horse Memorial at Weston College and Helen Bridge before taking the roads less travelled to Three Tree Hill Lodge at Spioenkop. The hospitality at Three Trees is sublime. Together we toured Spioenkop battlefield, walked amongst Rhino in the Game Reserve, visited the Kaalvoet Vrou Monument at the top of Retief’s Pass and drove down the Pass back into KZN. The monument commemorates the sister of Gerrit Maritz screaming out at a public gathering in 1843, that she would sooner walk bare-footed back over the Drakensberg than live in Natal under British rule. There she walks, bare-footed across the Highveld, back firmly turned on Natal.
Clients from Land Rover Durban joined us, and thoroughly enjoyed the drive down the Pass, although the Discovery without air suspension enabling greater ground clearance may be a little low for regular off-roading.

We never cease to be amazed by the requests made by some clients. This week a group of clients flew up to Dundee in a PC 12 airplane from the Eastern Cape, and hired two helicopters to transport them around the battlefields. It was incredible to fly over Ngwebeni and Mangeni by helicopter in glorious sunshine, before landing at Isandlwana for the talk/tour. Large numbers of locals assembled wanting to be photographed with the whirly birds. The clients insisted that where roads are poor and time in short supply, helicopters enable one to do so much more – I could not agree more, for those with the necessary resources. After the Rorke’s Drift talk/tour, we flew back to Dundee. The PC 12 had been refueled in Pietermaritzburg, and took off immediately to make their landing before dark in the E Cape. We refueled the choppers with jerry cans, and they took off for Durban in late afternoon light. An awesome day out in every regard.

Comrades is one of KZN’s great institutions, and this year was no exception. I supported my brother, Pete, during the second half of the race, on my motorcycle. What an accomplishment, just to qualify to enter the Greatest Human Race – I salute and respect them ALL. Pete came in under 11 hours, making us all very proud indeed.

Yesterday, I had a group of American ladies on tour, whilst their husbands were out wing-shooting. We travelled the roads less travelled around the Midlands, and included a talk by Annalie Kleinloog, author of Forgotten Trails across Natal.
Rarely in Life is one afforded the opportunity of Living the Dream – we are some of those very fortunate individuals, and appreciate each day.