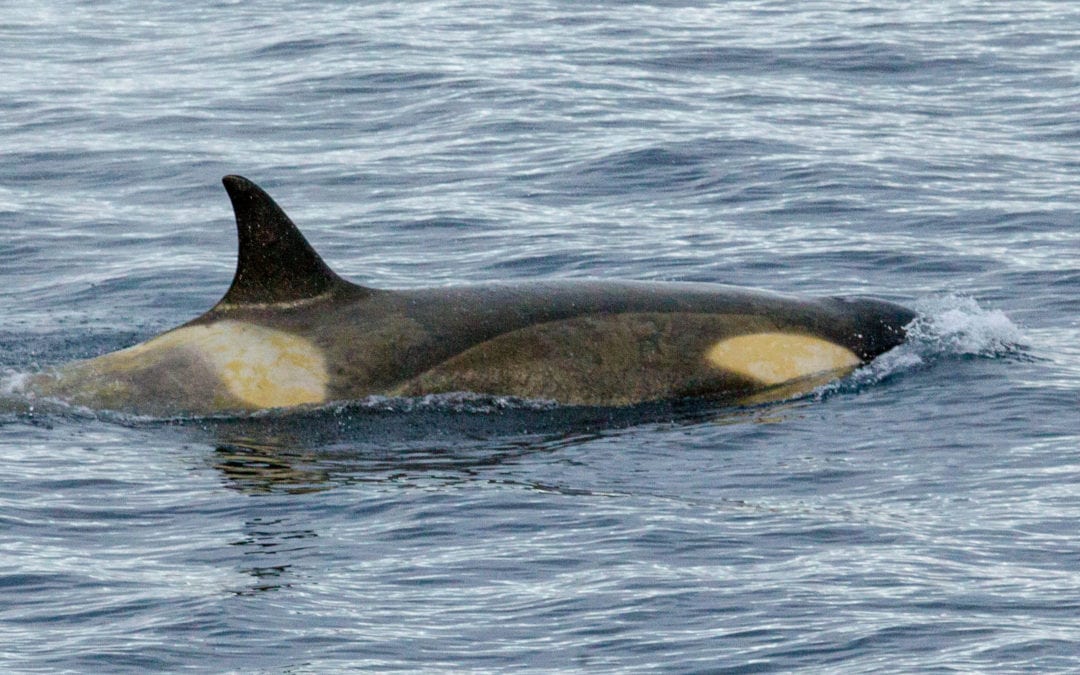 For readers believing that Antarctica’s weather is fickle, and can change within minutes, you may be incredulous to read that we had our THIRD magnificent day in a row today. Early morning found Le Lyrial cruising in the scenic Gerlache Strait, separating the Palmer Archipelago from the Antarctic Peninsula. Initially named after the ship, Belgica, during the 1897/98 expedition, the name was eventually changed to honour the commander, Adrien de Gerlache himself. Belgica was involuntarily obliged to overwinter in Antarctica, and when scurvy set it, it was indeed Roald Amundsen and an American doctor, Frederick Cook, who saved the expedition by providing fresh seal meat. De Gerlache did not cover himself in glory, and his leadership was found wanting, so he is fortunate to be honoured via this beautiful body of water today.

The expedition team were out early, scouting on Cuverville Island, at the northern end of the Errera Channel. Having been here just last week, it was a simple task to flag our hiking route on fresh snow, and mark the Gentoo Penguin colonies. With the bay full of large icebergs, surrounded by icy peaks, it made for a gorgeous scene beneath a partly cloudy sky. The ship, Hebridean Sky, made an appearance, and landed their guests about 3 miles from our position. With 16 ships in this part of the Peninsula at present, it is surprising that we do not see more vessels. Before the 2008 economic crash, there were 65 vessels plying their trade down here, and July is a very busy time as operators attempt to secure their landing sites, via website, and confirm their itineraries. From a safety perspective, ships are seldom more than 5 hours sailing from one another in the Peninsula.
This cruise has many families on board, with children, who were given the option of a snow slide. Quite who enjoyed it more, parents or kids, remains unclear – even grandparents screamed their way down the slope. Having enjoyed the hike, and the penguins, passengers were taken on a Zodiac tour through the icebergs, en route back to the ship. I spotted, from the Zodiac, an orange flag way up on the hillside. Jason, poor fellow, talking as he is wan to do, had left it at his station. Well, “he took one for the team” and had to walk all the way back up the steep, snowy slope to retrieve his flag. If one asks Jason the time, he will definitely tell you how the clock works. One guest asked Larry Hobbs why we don’t go south of the Antarctic Circle at 66 degrees South. Larry explained that this would require two more full days travel out of their itinerary, without adding much by way of scenery. Distance, travel speed and little advantage scenically make this itinerary perfect. Strange the obsession that some have with a line of latitude – Le Lyrial is hardly going to go “bump in the night” as we cross the Antarctic Circle?

Breaching Minke Whales put in an appearance right next to the ship, so many guests returning from the Zodiac tour were treated to this spectacle. The Captain carefully threaded his way through numerous icebergs in the Errera Channel, between Ronge Island and the Peninsula. This channel was named by de Gerlache (again) in honour of Leo Errera, professor at the University of Brussels, and member of the Belgica expedition. The mountains adjacent to the channel are sometimes referred to as the “Antarctic Alps”, and rightly so. Minke and Humpback Whales delighted guests; one Minke Whale breached right in front of the ship, much to our delight lining the outer decks. Minkes are known as the marathon runners of the ocean – fast, sleek and capable of vast distances. As small whales, they are often targeted by Orcas. (Orcas have just been spotted alongside our ship as I write this blog after dinner, and everyone is scrambling to see these beautiful creatures). Two Humpback Whales spent time very close to the ship, that we could photograph their blowholes, and even see their white pectoral fins -16 feet long and 5 foot wide. Their fins are indeed the same size as the stabilisers made by Rolls-Royce, for this ship, weighing 11 000 tons! Humpbacks weigh 45-50 tons, so clearly they have the better deal. I got much pleasure pointing whales out to kids, and where to expect them next to surface – kids tend to look where the animal was last spotted.

The afternoon was spent at Neko Harbour – a small bay on the eastern shore of Andvord Bay. In 1921 Neko Harbour was named after Christian Salvesen’s floating whaling factory ship, Neko, which operated in the South Shetlands and Antarctic Peninsula between 1911 and 1924. Neko hosts a large colony of Gentoo Penguins, and offers guests another opportunity to step onto the Antarctic Continent. Surrounded by active glaciers and mountains, it is a truly spectacular place. For some on the team, their favourite place in the whole Peninsula. The glacier failed to disappoint in warm, sunny conditions, and calved a number of times. There was even a small avalanche of snow that lasted some minutes, and created large white clouds above the water. A strenuous hike was offered to a vantage point 800 feet ASL. Richard Harker supervised the slides, and almost everyone took the slide option. Many kids went back to slide 3 and 4 times. One child from Australia lost his cell phone gambolling in the snow, but it was picked up and returned to lost property on board. Ship’s protocol is such that one can leave almost anything lying around, and it is perfectly safe. As I have said before, this ship’s greatest asset are her staff, who have thankfully not learnt about affirmative shopping!  Listening to families chatting, many rated today as their favourite day thus far, largely due to the slides and weather. Dean and I agree, that the full richness of this experience will only be realised by kids as they get older. As staff, we are asked to take a lot of photos of guests. Many guests don’t understand issues of lighting, composition, level horizons, etc. As a result our photos of guests are often very good, and it is rewarding how many guests come to thanks us for pictures taken earlier. In the distance, on Anvers Island, Mount Francais could be clearly seen rising to 9000 feet ASL. The highest point in this neck of the woods, and impressively so.

It has been another indescribably beautiful day in Antarctica. One guest after another mentions the impossibility of attempting to describe these sights and experiences to those back home. Certainly photographs cannot capture the essence of Antarctica, the silence, the vistas, the clarity of view, the smells and how a breath of wind has us all racing to get more layers on! These experiences are enhanced exponentially by the luxury afforded by Le Lyrial, and the organisational expertise of A&K. There can be no doubt that as one’s safari experience is made by the quality of your ranger, the quality of this experience is made by the quality of a world-class expedition team. Suzana and her team, with many years of experience, create a sublime Antarctic experience for all on board. Jason Hicks did a most amusing piece at Recaps about diamonds in Antarctica, before Larry had us entranced with Humpback Whale songs, and their similarity to the Wren’s song. Good sightings of Orcas after dinner rounded off this absolutely perfect day in the White South.