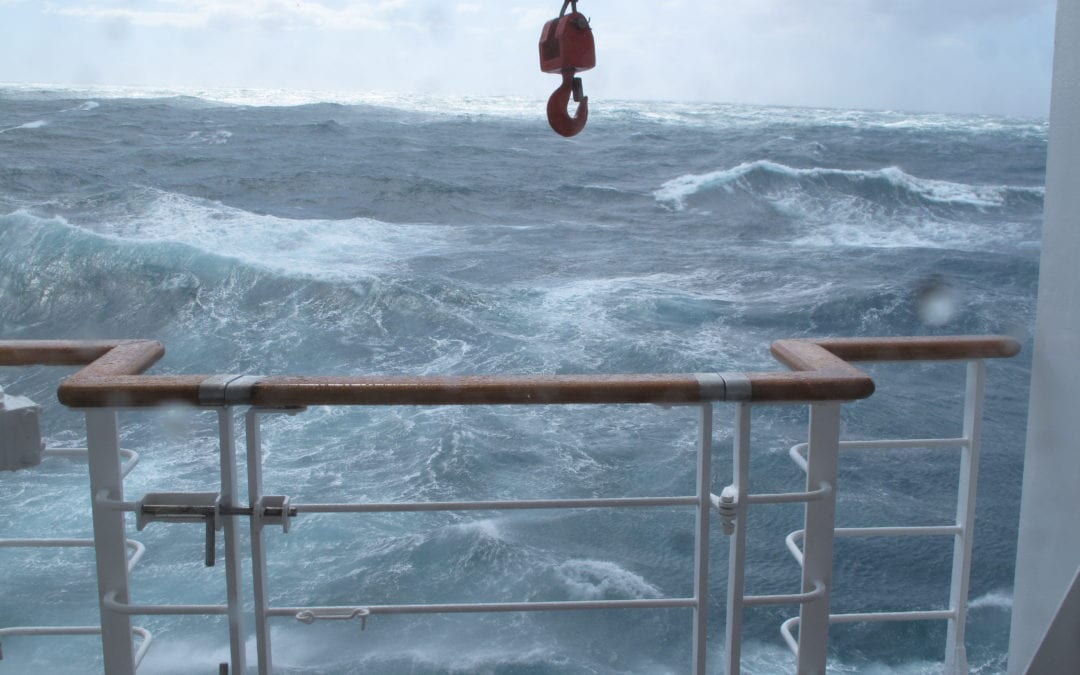 Overnight it became abundantly clear that the Captain’s interpretation of a good Drake Crossing, and a calm Drake Crossing, are two very different things. There was considerable swell last night, and our ship met with some large stopper waves on her bow. Breakfast and the morning lectures were very poorly attended – as much a function of rough seas perhaps, as it has to do with late night revelry. The nostalgia on board last evening was tangible, guests realising they were enjoying their last views of Antarctic Whiteness. This voyage has sped by, yet it feels that we left Ushuaia aeons ago.
Shackleton experiencing rough seas on the Drake commented “..As though we were truly at the world’s end, and were bursting in on the birthplace of the clouds and the nesting home of the four winds..”. Their ability with pen infinitely greater than mine, and the Drake’s reputation certainly is well deserved as the winds and current are funnelled north-eastwards between South America and Antarctica.

During the morning guests returned their rented boots, wet pants and walking poles, leaving little doubt that this Antarctic voyage is sadly almost over.

Richard Harker gave an enlightening lecture on “Turning good photos into great photos – the Basics of Digital Workflow. Like Ansel Adams, the final results depend on the editing process. In days gone by we depended on laboratories to improve our photos off film, nowadays much of the responsibility rests with us and digital software. As with many consummate professionals, they make it look so darn easy! Matters of white and black levels, white balance, sharpening and panoramic possibilities were discussed, and there is no doubting that those who were able to follow Richard’s lecture, will be the better photo editor for it.

Patri Silva then presented “Albatross – We have a problem!” Outlining the threats of long-line fishing together with land-based issues affecting Albatrosses, this was a very sobering presentation indeed. These great flyers pair for life, and fly massive distances foraging for food. Various policies implemented on fishing vessels have resulted in far fewer casualties to long-liners, but the Albatrosses at large remain vulnerable, and threatened. With the rat eradication program on South Georgia so successful, let’s hope that populations recover. What would the oceans be without the magnificence of Albatrosses riding on the winds? Wandering Albatrosses with their 10 feet wingspan soar above the tempest outside the windows reiterating this point.

Considering Henry’s wonderful talk “Poles Apart”, let us take a quick look at some of the other differences between the Arctic and Antarctica. The South Pole is 9300 feet ASL, with bedrock 100 feet ASL. The North Pole is situated on 3 feet of sea ice, with bedrock 1400 feet BELOW sea level. Antarctica – no tree line, no tundra, no native population. Arctic – clear tree line, well-defined tundra, circumpolar native populations. The South Polar ice sheet covers 98% of the land, whilst there is limited land ice in the Arctic. Mean annual temperature at South Pole minus 50 degrees Centigrade, versus minus 18 degrees Centigrade at the North Pole. No terrestrial mammals in the south, whilst Reindeer, Wolves, Musk Oxen, Hares, Lemmings and Foxes inhabit the north. Antarctica hosts less than 20 bird species, more than 100 species in the Arctic. Perhaps the most obvious – Penguins in the south, Polar Bears in the Arctic.

At 2pm, a Werner Hertzog movie was screened “Encounters at the end of the world”. Attempting to be surreal and unconventional, with the strangest narration, resulted in a very weak offering. The guests who were not lulled to sleep left the theatre. Large groups of Cape Petrels and Albatrosses around the ship are providing more worthwhile entertainment, fortunately. Lauren di Sandro from A&K is available daily for those interested in investigating or booking future A&K departures. As Cecil Rhodes famously said, “So much left to do, so little time”. The trips/cruises on offer are simply magnificent.

I then spoke about lesser known characters of early Antarctic exploration. Time precluded a more comprehensive spread, but Australian Mawson featured, along with Wilson, Bowers and Cherry-Garrard in search of Emperor Penguin eggs in the winter of 1911. The furthest South journey with Shackleton, Wild, Marshall and Adams was discussed particularly their dreadful struggle back to safety, before Crean and Lashly – two tough men, rounded off the party. I teased Caspar Bayliss regarding the loss of his Tom Crean hat, and urged him to get another one. The stories and characters of these backstage boys are so often forgotten in the fascination with the better-known explorers. A considerable turnout, considering the ocean, earlier attendances today, and passengers getting ready for Captain’s Dinner.

Jannie Cloete introduced all the staff to the passengers, in a lovely ceremony prior to the Captain speaking to all on board. Accompanied by Anna’s singing and snacks, it was a lovely farewell, before we all adjourned to the Dining Room, for yet another sumptuous meal. At our table a lively discussion was had regarding travel to Scandinavia, Italy, Ethiopia, Nepal and Australia. The merits of Air B&B, along with Couch Surfing, amidst much laughter. Pete and I sat with a wonderful family from Pretoria, and their 3 sons, together with Dean Hattingh. All were intrigued by the Afrika Odyssey Expedition in 1993, and trekking in Nepal. Guests confirming that Le Lyrial’s staff are her greatest asset.
It really has been a fantastic day at sea in the Drake, before listening to classical pianist, Larysa Baert, in the Theatre.