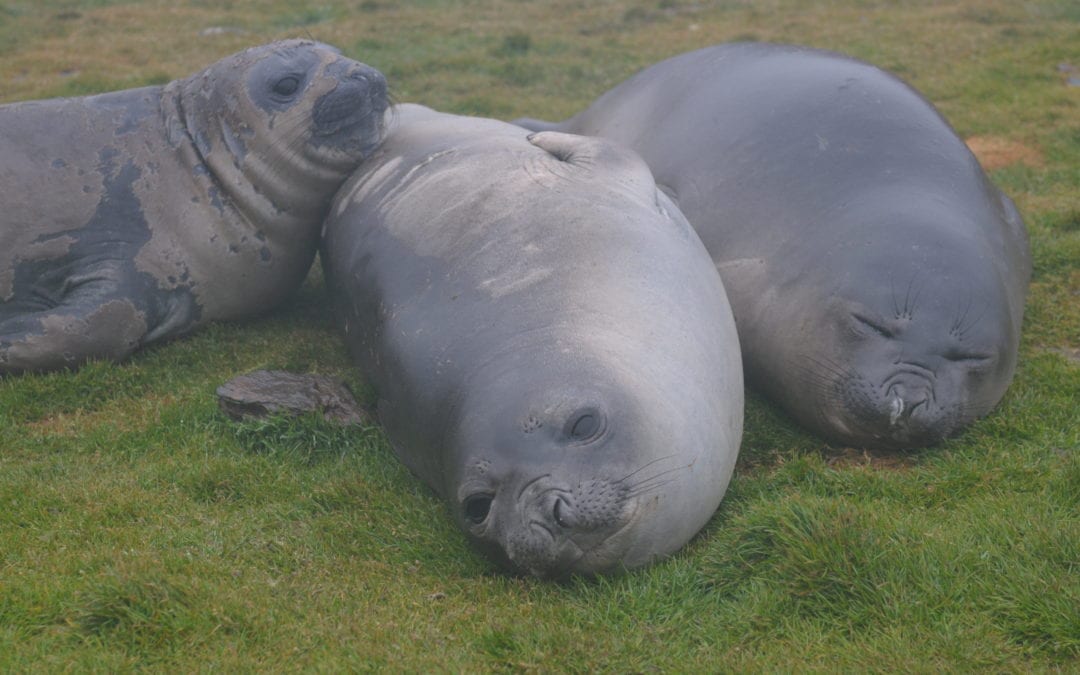 “South Georgia is for those who grew up dreaming of a Garden of Eden, where you walk unharmed among abundant and fearless wildlife in a beautiful wilderness – an oasis of serenity in a world increasingly out of step with Nature”.
Tim and Pauline Carr, Antarctica Oasis, Under the spell of South Georgia.

Certainly this is true, and none of our team can believe we have had two such amazing days weather wise consecutively. The weather yesterday and today, has been simply sublime. We were up early, for the team to be on the shore of St Andrews Bay by 6.30am – guests to follow at 7am. Mount Skittle overlooks the beach from the north, and Heaney and Cook Glaciers between the mountains creates an awesome vista. Unfortunately snow melt made crossing the river which separates the landing site from the largest known breeding colony of King Penguins impossible. Nothing, however, was going to dim our enjoyment of this glorious place. With weaner Elephant Seal pups all over the beach – their huge brown eyes perusing us gently. Many came up to sniff our trousers, and given the opportunity would happily lie down beside one. The Fur Seals were far less belligerent than those at Salisbury Plain. There were hundreds of moulting penguins lining the river course, and in beautiful weather our guests had ample time to wander, wonder and appreciate this unique experience. The din coming from the breeding colony left one in little doubt that hundreds of thousands of penguins were going about the earnest business of raising chicks. Zodiac tours were offered en route back to the ship, via the face of the breeding colony. Many guests were fortunate enough to see Leopard Seals, and almost all watched Giant Petrels feasting on an Elephant Seal carcass in the water. If anyone wondered why they had come to South Georgia, this morning confirmed their decision unequivocally. It was the most wonderful sensory overload – this region has a long history of doing just that.
Elephant Seals attempted to climb on top of our bags, and knocked almost every flag over in their curiosity. It is extremely humorous watching guests tip-toeing through the water. They have waterproof pants, and rented waterproof boots, for God’s sake.

Lunch was taken in misty conditions, sailing down to Grytviken in Cumberland Bay. King Edward Cove is the finest harbour in South Georgia, and it was here that Norwegian Carl Larsen established the first whaling station in Antarctic waters in 1904. Interesting to note that he was backed by Argentine funders, and the Argentine colours are still to be seen on many of the old vessels. Those early Halcyon years saw massive profits being made, more whaling stations established, and the whale populations decimated. Some 172 000 whales were caught and processed in 60 years by South Georgia’s whaling stations alone. As we entered King Edward Cove, the mist cleared and we were spoilt with stunning views in every direction. I have never seen Grytviken in weather like this – real postcard situation.

Guests were disembarked to join me at the grave of Earnest Shackleton, for a traditional toast to “The Boss”. Appropriately Shackleton and Wild were toasted with Jameson’s Irish Whiskey. The Chinese guests, as usual could not give a toss for anyone else, talking loudly and taking pictures at will. They make no effort to integrate, never mind even give us their names. Unfortunately the colour of their money is no different to anyone elses? Shackleton’s Endurance Expedition left Grytviken on 5 December 1914, at the height of the whaling days. Whalers warned that pack ice in the Southern Ocean was the worst in living memory. As Churchill had recommended, Shackleton decided to Proceed! What followed is one of the greatest survival stories of our age. The ship initially beset in the ice, just 43 miles from land, would eventually be crushed, leaving 28 men and 57 dogs floating on the sea ice for 6 dreadful months. Facing the most awful deprivations and suffering, the men would row for 108 hours without rest to reach Elephant Island, once the ice began to break up. Shackleton and 5 men sailed the 22 foot James Caird lifeboat back across 750 miles of Southern Ocean to seek help at South Georgia. The 22 men left on Elephant Island would eventually be rescued on 30 August 1916, 4 months and one week after Shackleton left them in April.
Only 8 years later Shackleton would be back on South Georgia, on board the Quest setting out to map Antarctic islands. On 5 January 1922, aged 47, he died whilst at anchor at Grytviken. How the Wheel of Life turns. His widow, Emily Dornan, remarked “that Antarctica always was his mistress, bury him there”. Hence this famous Polar explorer’s grave in Grytviken cemetery, to be joined appropriately by the ashes of his dear friend and second-in-command, Frank Wild in 2011.

After the toast, many guests set off on a hike up to Gull Lake, offering incredible views over the Allardyce Mountain range (once Governor of the Falklands). We then had ample time to look around the old whaling station, take guided tours of the same, marvel at the replica of the James Caird and many displays at the wonderful museum. The Lutheran Church built by Larsen in 1913, with a permanent priest, unfortunately was not well attended by the tough whalers.
Many guests found the whaling station tour haunting, as so many do. Unfortunately it is an integral part of this region’s history. Bruce Nozaic used to teach at St Stithian’s who have a special leadership program. He has been asked to present his photos and a talk to them about this trip upon his return. With the chaos of the cemetery earlier, I walked Bruce back to the graveyard later in the afternoon. Both he and Pete have taken our warnings seriously regarding the Fur Seals and their aggression. Some of the seals en route to the cemetery made Bruce a little cautious, and rightly so. I forgot my radio and camera at the graves, and had to walk back there a third time.
On the rear of Shackleton’s headstone is a verse from his favourite poet, Robert Browning. “I hold that a man should strive to the uttermost for his life’s set prize”. Special words for any leader, and particularly young men as they approach adulthood, I think.

Back on board, Pat Lurcock, Governor of South Georgia, spoke to us about the roles of his government, before the scientists offered some insights into their research, the fisheries and life on South Georgia. It appears that there is now careful monitoring of the Patagonian Toothfishing, and almost no bird losses to long-liners. An illegal fishing vessel was impounded, towed to the Falklands and destroyed by the Royal Navy – quite a stern warning to poacher vessels! Many guests took advantage of the Post Office, to send postcards home, with very sought-after South Georgia stamps. Others bought first-day covers. Suzana outlined plans for Gold Harbour in the morning, then ship cruising in Drygalski Fjord, before setting off for the Antarctic Peninsula. After dinner the dancers on board gave a lovely, short show of dance and movement, taking the opportunity whilst the ship is stable in King Edward Cove. All the South Georgia staff are on board for dinner, which we trust they enjoyed very much. I went up to dinner after writing much of this blog, and most buffet items were finished. It was no problem – the food on board is so good that we feel a bit like force-fed geese. The treadmills in the gym are source of much amusement, given the rolling of the ship. A stationary bike is a much safer option. There is a massive ex footballer on board from Wyoming – about 6’5 in height, and I see him turning the pedals at Level 10, which is very impressive indeed.
For every guest on board, this is one of those days which I am certain will be seared into their memories forever – it could NOT have been more perfect.