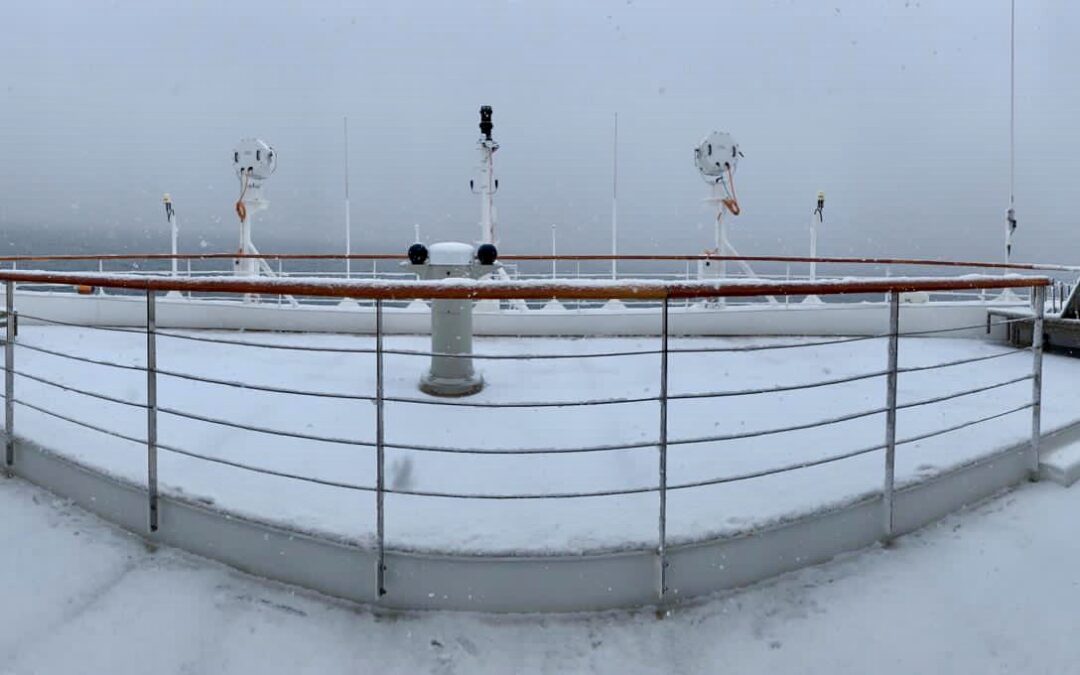 “Half the fascination an Antarctic expedition possesses in to be found in the sharpness of the contrasts experienced during its course, for it appears to be true that a hell one day is liable to make a heaven the next.” – Raymond Priestly
Priestly is the same fellow who wrote “For scientific exploration give me Scott, for speed of travel give me Amundsen, but if you are stuck in a hole with no way out, get down on your knees and pray for Shackleton.” Having visited Shackleton’s grave again yesterday, I felt it appropriate to include these wonderful words. The reason for repeating the first quote used only two days ago, will become clear. All in one day.

Our plan today was to visit Stromness Whaling Station, and take the walk up to the Shackleton waterfall, the last obstacle Shackleton, Worsley and Crean faced in their epic hike across South Georgia in May 1916. It snowed heavily overnight, and was still snowing heavily this morning. The water was forming grease ice on the surface, indicating just how cold it was. Visibility was very poor, and it was decided to abandon any landing plans for Stromness. We headed 30 nautical miles south (54km) to Moltke Harbour, named after the first powered vessel in South Georgia, the Moltke, brought here by Germans for the First International Polar Year in 1882/3. Regarded as the windiest landing place in all of South Georgia, very few visitors even attempt a landing here. Back to Priestley’s words above, by 10am, we arrived at Moltke to find calm seas, and the sun trying to break through. Talk about weather contrasts in 3 hours and 30 miles! Hell one place, Heaven the next?

We enjoyed a balmy morning, with guests basking in the sunshine, enjoying Gentoo Penguins, King Penguins, and plenty of Elephant and Fur Seals. One Fur Seal jumped into Russ’s Zodiac and got quite aggressive when Russ tried to encourage it to leave. The seal took up position on the front box eventually, and looked set for the day. Marco, JJ and I agree it will be the highlight of this season. We sat on the beach and laughed until we cried. Russ got bitten on the calf for his pains, and eventually drove over to some nearby rocks, and the seal calmly alighted the Zodiac as if that it what it wanted all along! It was captured on video and by many photographers. Hard to explain just how hilarious it was, and lasted about 20 minutes.
I made a commentary over the PA system from the Bridge at Stromness, and then dealt with Moltke Harbour and the expedition there at Recaps this evening.

The afternoon landing was planned for St Andrew’s Bay, home of a massive King Penguin colony, and favoured breeding beach for Elephant Seals. The scouting Zodiac goes out first with Marco and 6 or 7 Team members. As a rule, I come in the second Zodiac with the safety equipment and other landing gear. Today there was a large swell at the rear of our ship, so quick-release catches were used on the ropes securing Zodiacs to the ship whilst loading. This prevents a Zodiac being turned on its side by huge swells. Mike was on the tiller/engine, one deck hand was assisting us load the blue barrels of safety equipment into the Zodiac. I was in the Zodiac and had 3 of 5 barrels loaded, when a swell caused the front catch to release. The Zodiac tipped dangerously throwing over the 3 barrels, and knocked the deck hand into the sea. I was very grateful that my left leg serves me well again, after incredible repair work by James McAllister. I leapt over the 3 barrels and managed to catch the man by his life jacket strap half-way into the sea between the Zodiac and the ship. There were a number of people watching. It got all our hearts racing, and a stark reminder as to just how quickly accidents can happen.

Our afternoon thereafter at St Andrews was utterly magical. Sunlight, clouds, mountains, glaciers and all the wildlife South Georgia has to offer. Plenty of crew joined us ashore, which is such a treat for them. Plenty of photographs were taken, and I was delighted to see many had put their cameras aside, just drinking in the bounty of Nature, place and time. At present there is not another ship visiting South Georgia, and we are feeling justifiably spoilt in every regard.
Today was one of those days that took my breath away many times, a truly unforgettable experience on many levels.