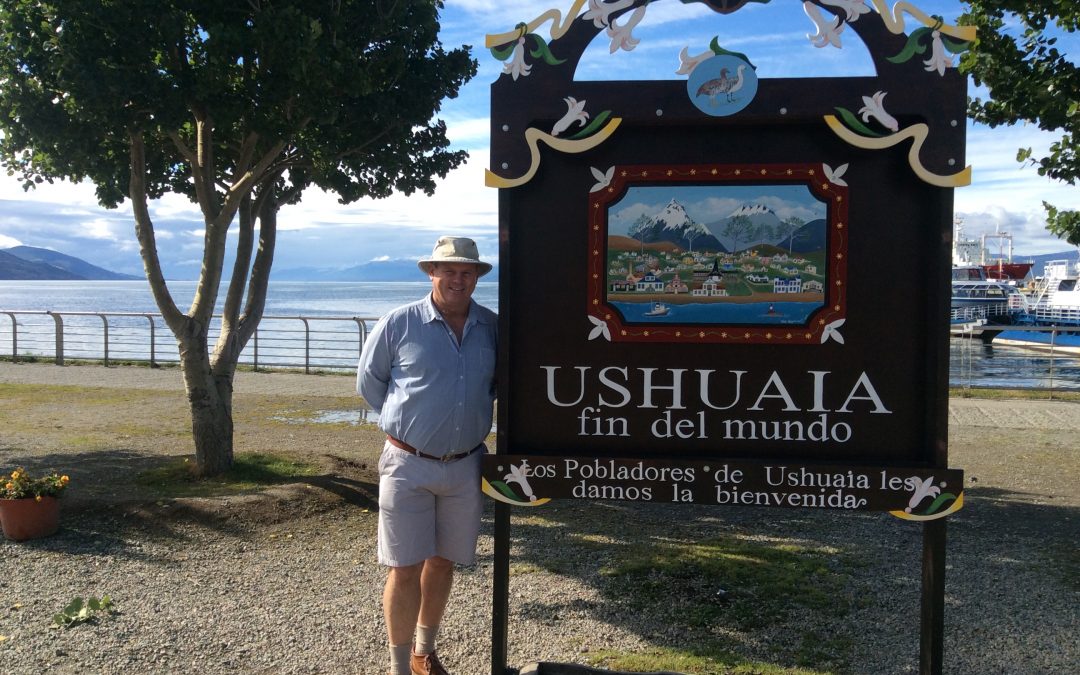 With great excitement I find myself back in Ushuaia, southern Patagonia, about to embark on a month in Antarctica with A&K, not having done so since 2017.
The SA Airlink official in Pietermaritzburg at 5.45am wanted to try and book my luggage through to Ushuaia – I said NO as I required my bag in Buenos Aires, so she promptly booked my luggage through to Sao Paulo in Brazil, for reasons known only to herself. When I went back to her explaining the serious mistake, the official said it was too late – luggage was loaded. Anyway, the kind hostess on the SAA flight from ORT to Sao Paulo moved me to an empty row of 4 seats, where I was able to stretch out and get some sleep, which was most appreciated. In Sao Paulo I then had to check into Brazil, just to recover my luggage. Immigration/Customs/Security – recover luggage, check luggage back in at the LATAM desk – Security/Customs/Immigration. For anyone wondering about a gainful way of spending time in transit, this is NOT to be recommended.

On a positive note, the power of the human spirit never fails to amaze me. Folks noticing my difficulties with walking and my crutch have consistently tried to make Life easier. LATAM organised wheelchair assistance, and seats closer to the front of the plane. Our flight into BA landed at 12.10am. By the time I had cleared Immigration/Customs and recovered my luggage, then travelled into the city, it was 1.45am. BA was still abuzz with activity and people at this time, which was wonderful to see. At the hotel, the fellow at Reception was stunned when I asked him to call my room and check that I was awake at 3.10 am for a 3.30am transfer to the airport (for a 5.20am flight to Ushuaia). When I came down to Reception at 3.20am, the dear fellow made me a cup of coffee ‘on the house’. It was necessary and enormously appreciated.

I met my old friend, and Assistant Expedition Leader JJ from Costa Rica, at the airport in BA. He was called aside by the Customs Police as we were boarding to open his bags. Turns out he had two huge bottles of Tomato Sauce in his luggage intended for a celebrity family travelling with us in Antarctica. JJ was allowed to keep the sauce, and we landed into Ushuaia where it is 5 degrees and very windy. The kind folks at the hotel arranged an early check-in, as the hotels hereabouts are absolutely bursting at this time of year. More than 90% of the visitors to Antarctica in the short 3-month season travel through Ushuaia.

It is simply wonderful to be back down here, about to get on a ship and cross the Drake Passage to Antarctica.
Today the expedition team met up to discuss embarkation plans, and first cruise itinerary. It is wonderful seeing folks who have become good friends, and meeting folk I have not worked with previously. The intellectual horsepower within this team is staggering, along with their combined experience, that I really am extremely fortunate to be amongst them. A degree in Agriculture qualifies me very poorly to be lecturing on Antarctic expeditions! There is also a film crew onboard documenting the voyage and team, commemorating A&K’s 30th anniversary in expedition cruising. We enjoyed a fantastic buffet dinner at the Arakur Hotel, high above the town of Ushuaia, before a 40-minute bus trip back to our hotel on the extreme western edge of town. There are 5 expedition ships alongside the pier – tomorrow is going to be a crazy day as we all turn our vessel around, and head back out with new guests.
The rich and varied tapestry of our 2019 year continues to be woven…