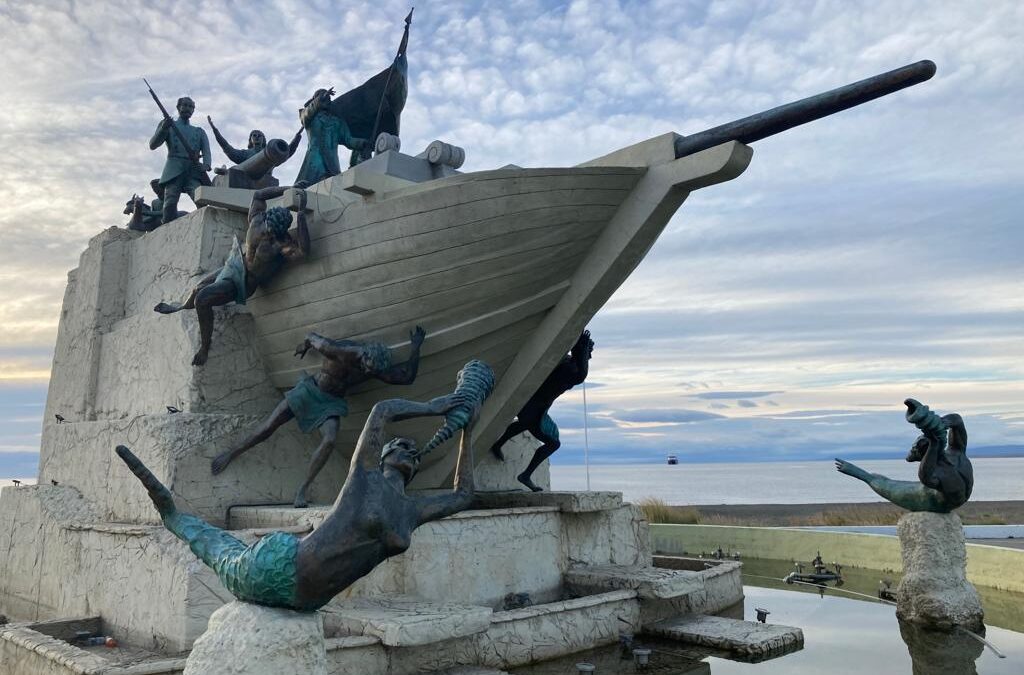 Those of you kind enough to read my last blog will know about my time between terminals and flights in Buenos Aires, then the 24 hour delay in flying south from Santiago to Punta Arenas. Having travelled through Argentina a fair number of times now, I am well aware of the chaotic check-in lines, and Santiago was no different. Thankfully I was in good time. The flight was absolutely full, and the two chunky chaps looked at me with dismay when they realised I had the seat between them. How often does that happen? Upon landing in Punta Arenas I saw the DC-3 and Ilyushin jets which conduct the Medivacs from King George Island (FREI) in the South Shetlands. This facility is also used by many wealthy guests who do not wish to tackle the Drake Passage by ship (Fly the Drake promotions). The vicinity of the airport along with the drive into town of Punta Arenas is not visually appealing, and I was filled with melancholia regarding Henry Worsley, who had ALMOST completed Shackleton’s trans-Antarctica walk alone, only to collapse less than 30 miles from finish. He was flown to Punta Arenas to die alone of Peritonitis. The story still haunts me.

I am hopefully not here to die alone, but rather to quarantine, alone. Chile have a mandatory 10-day quarantine requirement, recently altered to 7 days, but why release one if boarding a ship, right? Having arrived from the airport around 7pm, I took the opportunity of going to my room via the dining room, having missed lunch and sure there would be no food forthcoming. I was already in bed when a knock at the door signalled a nurse to take my temperature. Clearly Chile take this seriously, and my temperature is recorded twice daily. Meals are delivered to my door in brown paper bags. Times of delivery are erratic, and err on being late. The delivery staff, despite speaking no English, are charming and very helpful with a cup of coffee, extra water and the like. When I am done, I place the refuse outside my door, in the same brown paper bag. The remainder of the team did their quarantine in Valparaiso, and complained daily about their food. I have no cause for complaint – the grub has been pretty good. Judging by the amount of brown paper bags on the trolley, there are lots of inmates in quarantine in this hotel. South Americans tend to enjoy Life later than we do at home. As a result it is rumoured that some inmates slip out in the early mornings for a walk along the beachfront, and may even slip into the dining room for some protein, but I have not been able to verify these rumours. Largely since I don’t know one other inmate!

Opposite my hotel window is the statue in the photograph, celebrating the occupation/possession of the Magellan Strait by Chile. Five hundred metres along the foreshore is a massive orange structure celebrating Earth’s circumnavigation, with a fine bust of Magellan himself. Silversea’s Silver Cloud shared the quayside with Hurtigruten’s Fram, whilst another Hurtigruten ship weighed at anchor. Fram and Silver Cloud left today, and the quayside is now occupied by the other Hurtigruten ship, unmistakable by their shape and red and blue colouring. Sadly I cannot see the name as a fishing vessel is blocking the view. The fetch of water in front of Punta Arenas is considerable, and the wind can howl across it. On my first day here the wind turned the sea into a tempest, and blew the Portaloos over along the foreshore. I was forced to close the windows as the curtains were parallel with the ceiling, and my bedding ended up at the door! Talk about living in Woodstock, and simply opening front and back doors when the south-easter blows to clean your home. Try Punta Arenas. I almost called it something else, but will desist.

Should I ever forget which continent I am on, I simply turn on the television. There are 7 or 8 channels of fanatical football, along with two boxing/wrestling channels, and scarcely a look at the Australian Open Tennis as it approaches the finals? Secondly, the automobiles. Servicing and maintenance is clearly not a priority hereabouts, so there is lots of revving at the pedestrian crossings – either to keep the engines running or get the pedestrians to speed up. Have not figured out which. Yesterday a woman dressed in black and green, riding an all black and green motorcycle, with black and green backpack and boots approached. The colours caught my eye, then I noticed what looked perhaps like a bunch of grapes wrapped in black clingwrap. Anyway, as she geared down at the crossing, her black and green boot frantically violating the gear lever, the black and green bike stalled! The car behind almost rammed into her. She started the bike and took off, in what sounded and looked like 0-80 in first gear. I couldn’t help wondering what colour her home might be…Oh, yes, what would Life be without some colour and the brown paper bags?