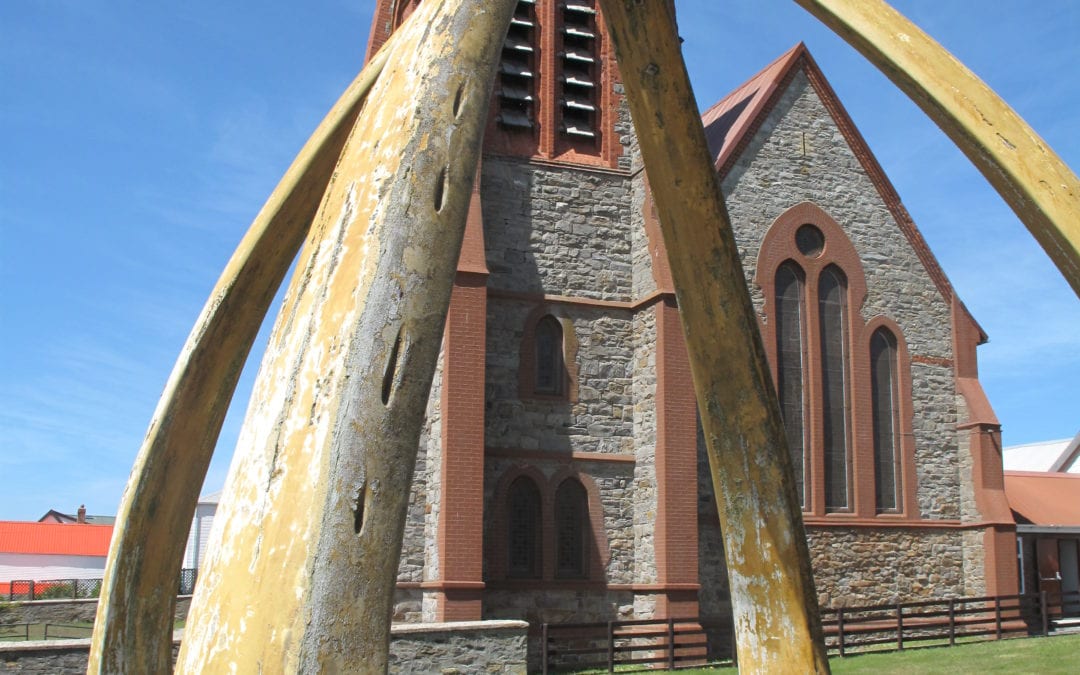 …”but if it is peace and quiet you are after, rugged windswept beauty, with ever-changing light, superb farmhouse teas with cream, the most wonderful wildlife and fishing, then you will find them all in abundance in the Falklands”

Thankfully by evening last night the wind and swell had calmed considerably, and after a good night’s rest, guests on board enjoyed the Falkland Islands off the port beam from sunrise at 4.30am. Approach into the inner harbour at Stanley was rendered challenging by a stiff westerly breeze pushing Le Lyrial towards the east bank of the very narrow entrance. Our Captain and his staff made it all look very straightforward, before waiting for a private super yacht to vacate the FIPASS floating dock.
The multi-coloured homes of Stanley providing their usual stunning welcome to this magical place. The wind resulted in anchor being lowered to the west of the ship’s docking position in order for us to “pull off” should the westerly wind strengthen during the course of the day. I listened in awe to the cracking of the kinetic ropes and the groaning of the winches as the ship was pulled alongside. Getting the gangway into position proved problematic – clearing the railing and lowering it to the ground. A JCB equivalent of a Bobcat was secured to pull the gangway clear of the ship, whilst the winches lowered it to the ground. Port authorities and tour operators alike lining the dock eagerly awaiting our disembarkation – tourism a vital component of this island economy.

A variety of tours are offered to A&K guests – Rockhopper Penguin colony, battlefields, nature walks and a farm visit. Penguins were centre stage and most guests elected to go and see the birds in tuxedo’s. Rockhoppers often come ashore in crashing waves, and scramble up impossible cliffs to roost and breed. Over the years their claws have eroded clear grooves in the rock, a very clear indication of their strength and tenacity. In true Falklands style, we experienced four seasons today, including squalls of hail. The westerly wind has blown unabated cooling temperatures considerably.
The Watson family entertained guests royally on their farm, the tour only returning to the Visitor Centre well after 2.30pm. Since most sheep herds the world over have been much reduced, the price of wool is once again at an all-time high. Along with oil, the squid industry, sheep farming and tourism, the Falklands economy is booming. The locals are extremely friendly and welcoming in their remote island home, with its expensive housing, and irregular even more expensive flights.

An interesting feature of this place, is a large crew of Zimbabweans who specialise in clearing land mines, a remnant of the 1982 conflict. Falklanders are delighted with their presence – the quality of the soccer team has improved, many of the women teach in the schools, and their singing in the church famous. In fact, the highlight of the Christmas carol service this evening is going to be the Zimbabweans’ singing! I bet they miss the African sun?

The battlefields tour took us over East Falklands to Estancia, from where San Carlos harbour was pointed out, 50 miles away. Our guide shared his insights regarding the conflict, after the initial seizing of South Georgia on the auspices of collecting scrap metal at Leith Harbour. Argentine forces then invaded and occupied the Falklands in April of 1982. The military junta in Argentina convinced that the Falklanders would relish the idea of the British oppressors being evicted. More specifically lay the sphere of influence (size of wedge) into Antarctica. What followed was a very unfortunate 74-day saga with massive forces being sent to the Falklands from Argentina and Britain. May and June comprise the heart of Falkland winter, desperately inhospitable and cold. Many of the Argentine conscripts were hauled out of schools in the warm northern regions of their land, to occupy the Falklands – the human suffering is indescribable. In turn the sinking of container ship, Conveyor, resulted in the loss of almost all the heavy-lift British helicopters. British soldiers were forced to yomp and TAB across 60 miles of treacherous country, at night, to avoid Argentine aircraft, carrying 50kg (110lbs). Given this topography and her numerous stone rivers, a formidable task especially in the dark. Various battles ensued as the British advanced on the heavily entrenched positions and stone sangars of the Argentines surrounding Stanley itself. With the eventual surrender of the Argentine forces, how ignominious to consider that the Harbour Master at Puerto Madryn would not allow the Canberra to dock and off load thousands of emaciated, cold-ravaged Argentine soldiers. The point was forced, and many of those young men had to find their own way home!
Falklanders feel particularly strongly about their sovereignty, and rights to self-determination – the conflict an unfortunate, tragic chapter in their history.

Everyone was back on board by 6pm, and Le Lyrial moved out of Port Stanley’s inner harbour back into the Scotia Sea for the 800 nautical mile run down to South Georgia. Pete and JD led an interesting Recap session regarding the Falklands, and our day on shore. One lady asked if everybody in the Falklands was related since there are only 3200 people living on the islands!
Restaurants were cleared early, I am presuming everyone is tired after an exceptional day on shore. The Young Explorers were even granted a tour of the lighthouse at Cape Pembroke. A movie about Thatcher and the Falklands War was screened at 9.15, offering interesting British perspectives and some dramatic wartime footage.