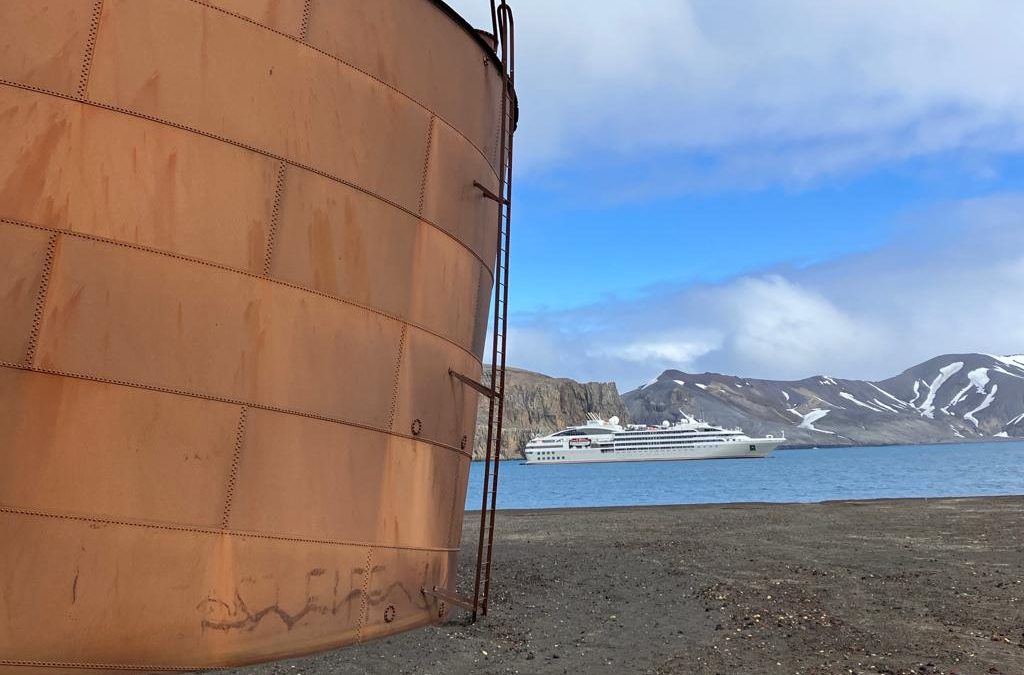 South Georgia Government officials came onboard at 8am to ensure that we obeyed all Biosecurity measures, and were not bringing any alien species to the island on our clothing or boots. Anyone with an interest in Shackleton dreams of one day visiting The Boss’s final resting place at Grytviken (Pot Harbour), on South Georgia.

I explained Shackleton’s final hours here in early January 1922, aged 47, and how he came to be buried in situ two full months later. When his body reached Buenos Aires, and his wife Emily Dornan was contacted via telegram, she relayed simply : Antarctica always was his mistress, bury him there.

Guests hiked from the cemetery up to Gull Lake above the station, then back down into Grytviken. Many took advantage of the offer to ring the church bells, first ordained on 25 December 1913.
The rain/liquid sunshine came down all morning, and guests were grateful for a tender ride into the old whaling station jetty, rather than an exposed Zodiac ride. Plenty of postcards were sent from the Post Office, and the shop enjoyed brisk trade from the A&K guests.

Over lunchtime Le Lyrial re-positioned to Fortuna Bay, in very heavy seas. The swell proved too much to run operations safely, so the decision was taken to visit Stromness Station and Valley. We landed safely where Shackleton’s famous walk over South Georgia ended on 20 May 1916. Guests walked up the valley in sunshine, amongst thousands of Fur Seals and plenty of Elephant Seals. There were frequent, powerful gusts of wind, reminding us of the challenges of operating on South Georgia.

Marco was delighted to effect this landing – a real bonus given the weather and wind conditions outside this protected bay. After dinner, we went to Leith Station, the largest whaling station on South Georgia, and I gave some of the history over the Public Address system. A magnificent second day on South Georgia.

In very windy, cold conditions a Zodiac tour was enjoyed this morning in Rosita Harbour, Bay of Isles – features chartered and named since James Cook’s 1775 expedition to South Georgia. The weather seemingly enjoyed by the abundant Fur Seals and penguins. Albatrosses and petrels riding the winds effortlessly about the ship. At the end of the tour, the wind was running at 50 knots (about 90km/hr). In these conditions unloaded Zodiacs can easily be flipped over, so a 25lt container of water is placed in the bow box as ballast, to give the front of the Zodiac some weight. The magnificent aluminium expedition yacht, Vinson of Antarctica, is anchored in the bay. Designed and built by Skip Novak, this yacht brings 10-12 hardy sailors to South Georgia and Antarctica a number of times every season.

By 11am we were underway towards Antarctica, amidst 5 meter swells, and considerable movement on the ship. Marine Biologist Rich Pagen presented a wonderful, humorous talk about Sex on and off the beach – all about the various means by which creatures reproduce in cold regions. The Argentine themed lunch on Deck 6 was outstanding, especially the lamb at the carvery.

By 3pm the ocean had eased somewhat, but the ship was a ghost town because of the swells. A few guests turned up for Luciana Motta’s presentation on the Whales of the Southern Ocean. Much amusement was created by Luci imitating a whale’s blow and throwing the electronic pointer into the ceiling. It all fell apart, and was promptly repaired by a fellow Team member. Carlos and Alberto create beautiful music with their South American harps over tea time in the main lounge. Ornithologist Patri Silva spoke about the Evolution and Diversity of penguins in her second lecture about these enigmatic birds in tuxedo’s.

South Georgia, irrespective of the weather, tends to be a sensory overload. The abundance of wildlife, breath-taking scenery, human and whaling history, along with the grave of Shackleton creating an unforgettable kaleidoscope of memories. Given the wind, rain and sleet we have experienced here, perhaps moreso than usual, the guests by and large took an afternoon nap. Sylvia Barnes won a bottle of Champagne by spotting the first iceberg larger than the ship – what excitement. The extremely exciting news is that an ice shelf in the Weddell Sea has calved off an iceberg called A-76. This behemoth tabular iceberg is 100miles/160km long and 25 miles/40km wide! Larger than the island of South Georgia itself. It lies directly on our path to the Antarctic Peninsular. We are all very excited at the prospect of seeing such a natural phenomenon. It will certainly be a once-in-a-lifetime opportunity.

Sealing began on South Georgia in 1788, only 13 years after Cook’s discovery of the island. By 1825 an estimated 1,2 million Fur Seals had been killed for their pelts, and by 1912 the Fur Sealing industry had come to an end, the species almost wiped out on South Georgia. In 1904, Carl Larsen, a Norwegian, set up the first Antarctic whaling station at Grytviken, with 60 men. Whales replaced seals, numbers were plentiful, and demand for their oil was high. Sven Foyn created the exploding head harpoon in 1904, and with that the decimation of Cetaceans began in earnest. Products made from whales included oil for lighting, margarine, soap, fertilizer and food supplements for farm animals. Despite being extremely profitable initially in South Georgia’s waters, the unsustainability was apparent from the outset. Pelagic whaling factory ships made control almost impossible, despite laws against taking females with calves, etc. The catch skyrocketed, leading to an overproduction of oil and a crash in the prices. Between 1904 and 1965 when whaling ceased completely on South Georgia, 175 250 whales had been processed here. The eerie, derelict whaling stations (Stromness, Leith, Husvik, Grytviken and Olav) stand as decaying memorials to this brutal industry. The scale and efficiency of the bygone operations remain vividly apparent.

At Recaps, I spoke about Frank Wild, and how he came to be cremated in South Africa in 1939.  His ashes were returned to South Georgia to be interred next to Shackleton in 2011.

Photographer Renato Granieri revealed that this A&K Team have a combined experience of 391 years experience working in Antarctica. More guests would be well advised to make their voyage selection based on the Expedition Team, since the ships are fairly homogeneous. I hosted a very pleasant table indeed, including an economic expert from Hong Kong, who has no illusions facing Africa economically, especially South Africa.