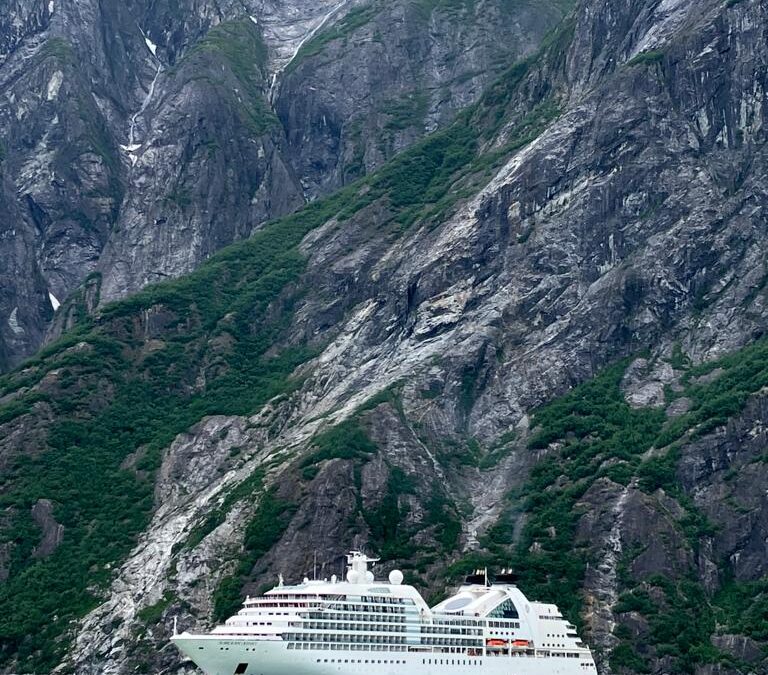 One of my early travel objectives was to drive the Alaska/Canada Highway, known more specifically as the AlCan. Initially the many fuel and oil drums left along the way provided the humorous nickname of OilCan Highway. After driving the beautiful 2500km route, I returned south using the Alaska Marine Ferry system, disembarking at Price Rupert in Canada. Yesterday during the Zodiac cruise, an elderly lady mentioned that she was at school with a fellow whose uncle worked on the AlCan. I responded how impressed I was, since it was built in 1942 (80 years ago). She was horrified and immediately said he must have been lying. It created much mirth on the boat. Twenty six years later I find myself fortunate enough to be travelling this magnificent coastline, in vastly different circumstances on luxury cruise ships. Skagway and Haines are 23km apart by sea, but 580km by road, making the waterways so convenient. Opportunities afforded now to visit places like Glacier Bay and Misty Fjords of course were not an option for me back then.

This season will afford the opportunity to experience seasonal changes, the snow melting, the salmon running and just how Alaska hereabouts depends almost wholly on the cruise ship industry. Given very little sport/recreational fishing over past two years provides much speculation as to how fish populations may have responded. This vast land of forests, mountains, glaciers, rivers and wildlife certainly has an appeal all its own. Huge numbers of mosquitoes and biting flies are less appealing. Thankfully Sea Otters (The Old Men of the Sea) have bred up since their numbers were decimated by the pelt traders. Sea Otters have the densest fur on Earth, which has to be kept extremely clean to ensure the animals retain their body warmth in these cold waters.

There are a number of guests onboard who have sailed up here from the Lower 48, either on power yachts or sailboats. Their experiences are fascinating to listen to, and require some considerable financial commitment. There are many who tell me they have friends with boats, intimating that the responsibilities and maintenance requirements of boat ownership are onerous.

There are a large number of South Africans working onboard, giving good accounts of themselves. The Cruise Director informs me we are the second largest group by country amongst the crew.

The ability generally of other nationalities to speak English never ceases to amaze me. That is one of the many attractions of ship work, the opportunity to work/interact with folks from all over the world. Without exception, they are delightful. We hold the Ukranians close in thought and behaviour daily.