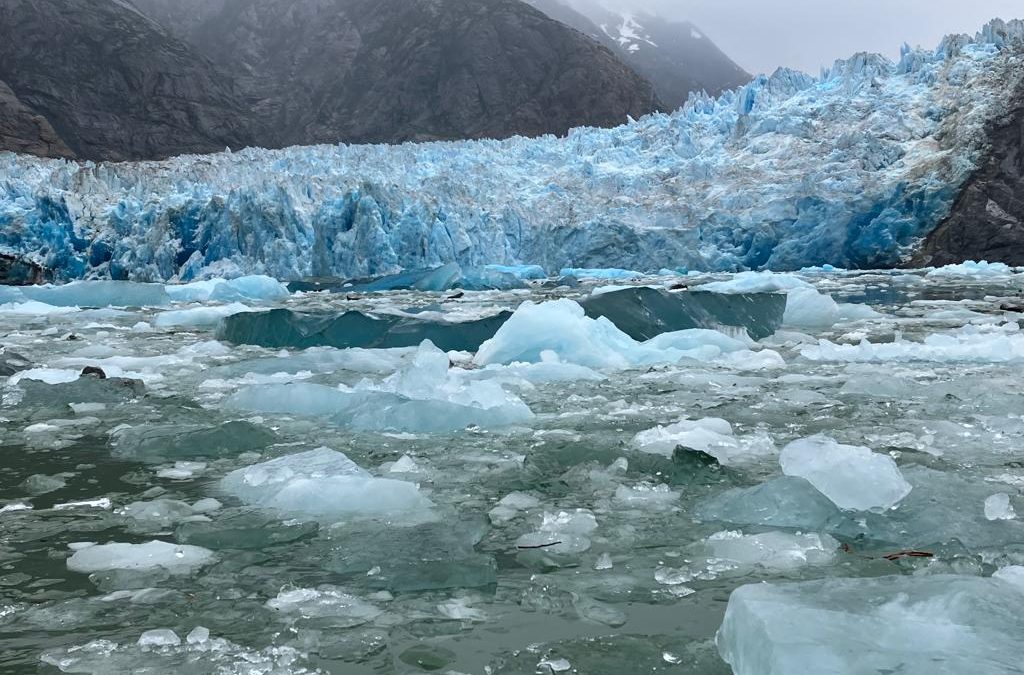 On a beautiful morning, in very calm water, Seabourn Odyssey approached Haines. A very different scene to the fog which greeted us at the Inian Islands yesterday. The tide was low, and glacial moraines were clearly visible. Low clouds accentuated the scene, with mountains seeming to run off into eternity. There is snow still visible on the high ground. With unfailing punctuality, the Captain halted Seabourn Odyssey about 800 meters off the Haines shoreline precisely at 7:00 AM. Two zodiacs had earlier been lowered into the water in order to ferry guests across the Chilkat River for the Davidson Glacier hike. A beautiful walk through temperate rain forest to a very scenic glacier. The Expedition Team, in charge of the zodiacs with their US Coast Guard registered drivers. Hooligan fish oil was widely traded by people of the region, giving Chilkat River locals considerable power over neighbouring clans. Residents of Haines welcomed us warmly. The past two lost seasons on account of Covid have affected them hugely. Many only spend the summers here, remainder of the year in the Lower 48.

During this past week we visited the Hubbard Glacier and Inian Islands. Hubbard Glacier is the largest tidewater glacier in North America, with a 6 mile front and 75 mile feed, running back over the US border. Very regular calvings take place as the glacier is advancing. Our videographer got the most spectacular footage from the Zodiac and drone. I was driving the Zodiac and thrilled at the results. Inian Islands experience massive tidal changes as water rushes into the Inside Passage, or back out -14 feet at times. Here too we secured beautiful footage of Sea Otters, Steller Sea Lions and massive swells, the Kelp looking like mighty serpents below the azure blue water. After weeks of rather dreary work onboard, it was a special privilege to get out in a Zodiac in these wild waters.

Southeast Alaska has a very rough coastline. Haines and Skagway are 14 miles apart by water, but 365 miles apart by road, confirming the difficulties with road building hereabouts. I spoke in a Seabourn Conversation about the difficulties of building the Alaska/Canada Highway in a record 10 months in 1942, after the Japanese bombed US Navy ships in Pearl Harbour. Juneau, the capital city of Alaska, is not reachable by road, hence the vital importance of water and air transport in the Panhandle (as SE Alaska is popularly known). Haines is slightly north of Juneau, and only 45 miles from the Canada/US border.

Haines is an attractive town. The old military buildings of Fort Seward stand proudly overlooking the bay. Rumour has it that Seward was a Presidential hopeful, beaten by a “nobody lawyer” Abraham Lincoln. Seward was strongly outspoken against slavery, one reason cited for his defeat at the polls? Lincoln ended up assassinated, and Seward with a scarred face from his attacker’s Bowie knife! The attack came from Booth’s conspirator, Lewis Powell in 1865. Many photos taken of Seward’s profile as a result, and not face-forward. This is the very Seward who bought Alaska from Russia for $7.2million in 1867. Seward coerced, wined and dined as necessary to conclude the deal – in the very same year that Carnarvon successfully confederated Canada. Same year ironically that diamonds were discovered in SA. Soldiers’ accounts are full of complaints about the cold, the monotony, the mosquitoes, and the biting deer flies when they were stationed here. Hunting and fishing the only means to break the monotony.

One place Haines is famous for is the Hammer Museum, marked by a 25-foot-high hammer, which looks so much like a totem pole. A blacksmith, Dave Pahl, began collecting hammers in 1973. With more than 2000 hammers on display, it is bewildering. Seemingly there are hammers for every purpose – from tiny barristers’ hammers designed to break the wax on sealed envelopes, to a 22 pound brute from Australia. There is even a wooden club used to break the window on a sinking car, to save the trapped dog inside the car from drowning. One downtown shop stocks items produced by Alaskan artists only, another sells honey from various sources, kept at a temperature (around blood temperature) to minimise crystallisation. The craft beer brewery well worth a visit. Coffee shops no longer provide free WiFi on accounts of youngsters streaming downloads.

Guests enjoyed the town, others going further afield to hike the Moose Meadows hike or to Davidson Glacier. The Chilkat Bald Eagle Preserve of 48 000 acres/ 19 000 hectares established in 1982, creates a haven for up to 3500 eagles between October and December, coming to feast on the ubiquitous Salmon. Haines sometimes called Valley of Eagles. Walking in these temperate coastal rainforests is a wonderful experience, with guests learning about the last Ice Age 12-14000 years ago, and subsequent glaciation and erosion, then the return of vegetation, which happened very slowly since there is initially no soil whatsoever. The succession from tiny ferns and plants to spruce and hemlock trees with roots intertwined for mutual support is one of nature’s many miracles. The lack of soil does not bode well for these forests during hot, dry spells.

It is just less than 3 weeks until I fly home. At the start of this 13-week long season, I never thought this day would come. It has proven to be a challenging, very long season indeed. Covid has changed cruise shipping almost immeasurably. I am going to Antarctica in December, and hoping some sense of the old normal resumes sooner rather than later. Tired of dancing the Covid Can-Can, trying to avoid Chinese Flu…