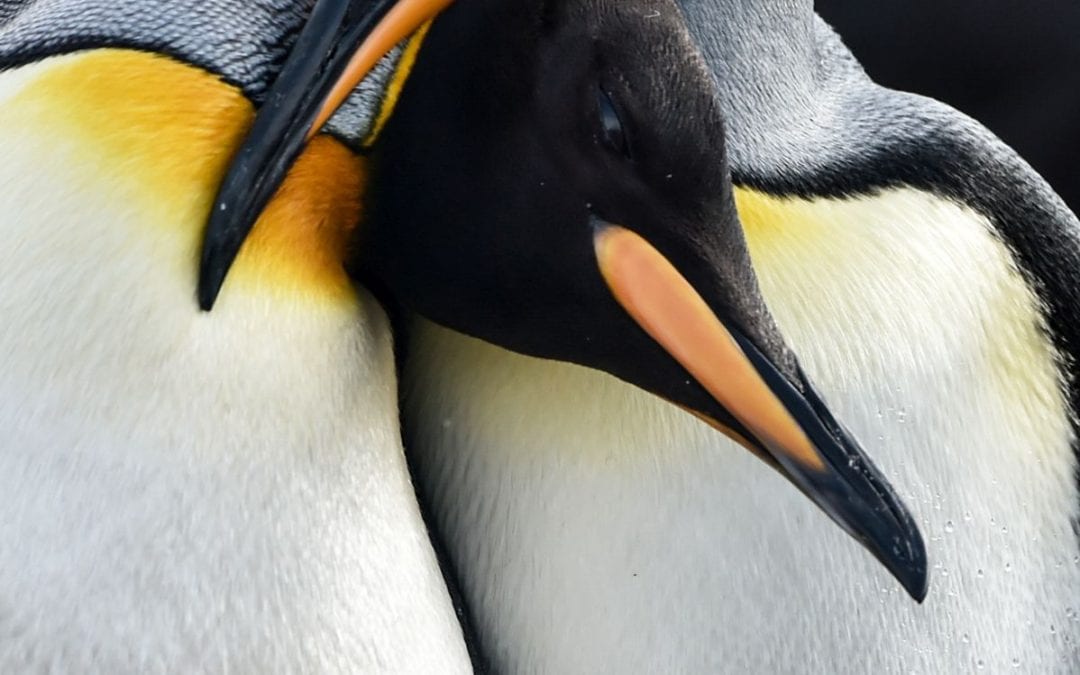 After the absolutely sublime day yesterday at Gold Harbour and Drygalski Fjord, many guests went to bed late celebrating exceeded anticipations. The charm and glory of South Georgia having worked her magic on everybody on board. I was pulled up regarding my comments yesterday on closeness to seals, the kids anxiety about the Fur Seals, etc.
During the morning geologist/palaeontologist Ian Miller presented a magnificent lecture titled “Our Ocean Planet-Stories from the Deep”. The first half of his talk centered on ocean currents, temperatures and systems, with special reference to the Convergence Zone and Circumpolar Currents. Current temperatures affect the ambient temperatures, illustrated by cities in Chile and Brazil at the same latitude having markedly different average temperatures. Ian then went into detail regarding Life in the oceans over the past 450 million years. Most interesting were his photographs of excavating marine fossils on mountain sides all over the USA and Canada, which were clearly at one time on the ocean floor. Ian is certain that Life as we understand it today evolved from the oceans. What is it about the palaeontologists that the names given to all these remarkable life forms are so complex, and practically impossible for most of us to pronounce, never mind remember? It was amusing to see photographs of a paleo-nird with tattoo’s on his arms of early fossilised creatures which Ian loved, but his wife, Robyn, who is with us on board refused point-blank.

Marine biologist Larry Hobbs was up next with his talk “Where Blubber is not a bad thing – the Whales of the Southern Ocean”. As mentioned previously Larry is a Whale Whisperer and his commentary on these denizens of the deep is not to be missed. Yesterday his voice over the PA system with Humpback Whales swimming very close to Le Lyrial clearly indicated a deep understanding and connection with these fellow mammals. Whales, like Dolphins, tend to evoke unusually passionate responses from human beings, and everyone on board is hoping to see plenty of whales during this voyage. Their adaptations for a marine life, their ability to swim enormous distances, feeding behaviours, breeding cycles and many other fascinating aspects of whale life were shared by Larry. His stories about Grey Whales off the US coasts, and human interactions with these cetaceans were brilliant. Gasps of awe greeted his descriptions of whales’ reproductive organs – a Grey Whale’s matching the size of a VW Beetle!

There is a gentle rolling motion of the ship today as we sail the 900 nautical miles between South Georgia and the Antarctic Peninsula. Guests are editing photographs and reflecting on this extraordinary journey in all common areas. Lunch was a most jovial affair, many new friendships being forged, and members of the team joining many tables at meal times. During the morning an emergency drill was rehearsed by the crew only – always comforting to know that they are ready and able to deal with any eventuality at sea. At lunch I sat with a group of guests, some of whom are A&K representatives from the US and Australia, and we had a lively time together. I related a story about Mr Gore-Tex before the age of digital photography wanting to get a photo of a large male Elephant Seal. At the penultimate moment, with Mr Gore-Tex only feet from those enormous nostrils adorning adult Elephant Seals, the seal sneezed! About 5 lbs of snot flew out of each nostril, and Mr Gore-Tex was still trying to clean himself, his clothing and his equipment at the end of the voyage. The laughter was probably the loudest in the dining room.

Former BAS Base Commander, Russ Manning, gave a lively resume’ of 26 years of life at the edge. Russ has enormous experience as field guide, Zodiac driver, climber, diver and Base Commander. Still involved with sea rescue in England, he has no peer as a Zodiac driver. His photographs and descriptions of years of working in Antarctica are of great interest to the guests. Russ’s story about a reckless descent by rope into a crevasse, then ‘potholing’ through two more chambers until they reached bedrock 450 meters below, with the ice grinding and booming around them almost saw his Commander aspirations smashed. Russ looks a bit like a wild man from Borneo, with long, curly blond hair which I believe would curl further at the mention of a comb! Russ has a countenance which twitches continuously, rather like a rabbit’s, but if we were in a spot of bother, we are all relieved to have Russ with us. His experience down here beggars belief. With the snow in England, and Heathrow in chaos, his bag was not loaded after his flight was cancelled and he had to get another ticket. With some toiletries bought in Ushuaia, and A&K’s new uniform, he seems completely unfazed by it all. His bag awaits him in Ushuaia now. Russ tells me he is buying a motorbike online, will take a taxi from Heathrow to the dealer, and ride it home, his bag tied on behind him. More snow may scupper his plans?

Photo coach Richard Harker offered the guests suggestions on photographing the perfect penguin in Antarctica. Richard stressed getting down low, to penguin level, whilst attempting to remain clean – important, but could be challenging. Ideally one wants to photograph clean penguins, those coming from the ocean, as these birds in tuxedo’s are often not clean. After much debate regarding editing, Richard warned against over-editing showing a photograph of a penguin and Polar Bear in the same shot.

At the evening REcaps, Helen Ahern spoke about the happywhale.com website, who are collating photos of whales and seals from around the world trying to establish numbers, migrations and so forth. Richard showed us all some fascinating aspects of smart phone photography, especially as many guests are using them as primary cameras down here.
I had dinner with a lovely group of guests, along with Ian and Robyn Miller. Very well travelled folk from various parts of the USA, with the necessary resource for journeys like these.
All in all, a fantastic day at sea on board Le Lyrial, sailing south on calm seas, thankfully.