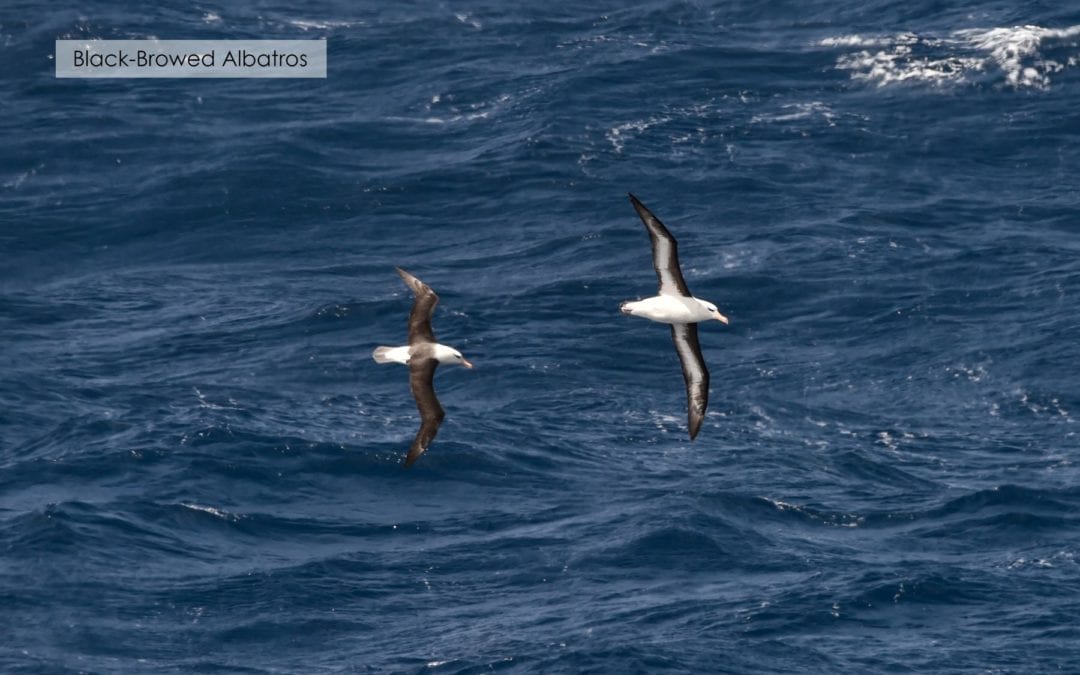 Ernest Hemingway wrote ‘The old man knew he was going far out and he left the smell of the land behind and rowed out into the clean early morning smell of the ocean.’

Bunkering of fuel lasted until 1am, before we could proceed down the Beagle Channel and enter the open ocean. Early morning found Le Lyrial running fast up the east coast of South America, on a calm sea. When we turned eastwards towards the Falklands, as the Captain warned us, the swell picked up producing some movement end to end of the ship. Inevitably, there are quite a few guests still finding their “sea legs”, feeling queasy and avoiding meals and lectures.

The expedition team had a busy time exchanging parkas, boots and waterproof trousers for guests. Larry Hobbs, the Whale Whisperer, with very strong views on sustainability was tearing open the plastic bags with gay abandon, rendering them unuseable for exchanged items. I jokingly asked him how this sat with his view on sustainability, recycling, etc. Well, Larry brought the team to tears of laughter by telling me to F Off without hesitation.

Patri Silva gave a marvellous lecture on Seabirds of the Southern Ocean. Seabirds being defined as those spending a significant part of their lives in a marine environment. With fantastic images, Patri showed us the more common birds we are likely to see, and the tube-nosed birds with their particularly unique manner of dealing with salt water ingestion. The dangers of introduced predators, long-line fishing and plastic in the ocean were highlighted. Some were daunted by the variety of Albatrosses, Petrels, Fulmars, Prions and Shearwaters, others fascinated. Patri would move across the stage imitating the various species in flight, looking so much like a glorious seabird herself. Standing between two women with outstretched arms to represent the massive 3 meter wingspan of a Wandering Albatross, Patri indicated that an Albatross has the same size head as herself, perhaps less brainpower… Sadly the joke was lost on a somewhat drowsy audience. Clearly passionate about birds, Patri admits to not being interested in the rocks, the whales, the seals, and is clearly determined to convert all on board into a bird lover by the end of the cruise.

Photographer Richard Harker was up next, with his very interesting talk on what to expect and how to prepare when photographing Antarctica. In his own quiet way Richard has taken quite a ribbing from the team, after admitting last evening when introducing himself, that he recently had his DNA tested, and that he is related to Neanderthals! American by birth, Brazilian by marriage, Richard is one of those rare special souls, hence our amazement at his Neanderthal comments. He highlighted the advantages of visiting this early in the season, with pristine snow, typical Antarctic scenes everyone dreams of seeing, and the presence of nesting birds with eggs rather than young chicks. Richard’s photographic knowledge and experience in Antarctica is very impressive. He provided invaluable tips for the guests on how to prepare themselves and their equipment, along with tips on how to take great photos in this extraordinary environment. Of his many wonderful images, the one most guests remembered showed Richard standing with all his equipment, absolutely covered in snow.

I enjoyed lunch on Deck 6, with the A&K ladies from the Melbourne office. One is feeling especially queasy, and I pulled her leg about taking advice from the very convincing French Sommelier regarding seasickness. An interesting discussion was had regarding the demographics of guests on these cruises, the perspective children provide and the challenges of much older folk determined still to experience these journeys. They also wanted to hear my limited views on the 1982 Falklands conflict, which they found very sobering indeed.

Ian Miller, geologist/palaeontologist from Denver, gave us some insights into the geology of the areas we will visit, bordering the Scotia Plate. Mid-afternoon is never an easy time to present, and particularly not when tectonic plates, subduction zones, rifts and trenches along with the other aspects of this complex subject are being considered. The stone rivers of the Falklands created largely from a freeze/thaw action over millennia will be of great interest during our visits tomorrow. Antarctica would be a shadow of her present self, were it not for the massive ice sheets making up more than 95% of the continent, and raising it significantly above sea level.
Like many, Ian’s wife, Robyn, finds the lecture Theatre on Deck 4 aft rather conducive to the onset of sleep. Being dark and without windows enabling one to see the horizon can make one rather drowsy, but Robyn was fascinated by Ian’s talk, as were we all. Ian loves searching for fossils in deserts where rocks are most exposed. Interesting that they are often searching for plant fossils, yet find modern plants an inconvenience as they “get in the way”. I noticed Ian drinking a lot of water during his talk, and thought nothing of it. Turns out the poor fellow was seasick, and had to bolt for the bathroom before his question time was over. Oh, the indignity of motion sickness.

Fin Whales and a pod of Orcas, including a huge male, created great excitement at 4.30pm. Dozens of guests lined the decks hoping to catch glimpses of these beautiful denizens of the deep. The naturalists assisted in identifying the abundant seabirds about the ship. Larry Hobbs created much amusement by getting mixed up between 9 o’clock and 3 o’clock positions relative to the ship, and blamed the digital watch for his error. Some of the ladies came scampering outside in little clothing and slippers, clutching cameras to their chests, hoping the mammals would be waiting for them alongside. Sadly they will realise that wildlife viewing, especially at sea, requires infinite patience, powerful observation skills, and plenty of good fortune. In these climes, appropriate clothing too!

Members of the team shared some insights into the Falklands, and what to expect tomorrow. Pete Clement who was born and raised in the Falklands gave fascinating glimpses into a society and land he loves passionately.
Suzana warned of cool, windy conditions, and as expected the Rockhopper Penguin tours are fully subscribed. Most folks to these parts cannot wait to see their first penguins.

Captain’s welcome cocktail party saw the guests enjoying Cliquot champagne, whilst Captain Le Rouzic introduced his senior officers on board. For dinner in Le Celeste restaurant on Deck 2, I joined a delightful table of four. Married couple, husband’s sister and an older gentleman from Iowa. Turns out brother and sister of Romanian refugee background, whose parents escaped the gulags at the end of WW2. Raised three sons and a daughter in the US, where father worked as a physicist for the government. Built their own homes, as salaries were low. Raised three engineer sons and a neurologist daughter. The neurologist loves glasses, and has two Porsches, after dreaming of being a top ice skater. Brother now a software engineer, whose wife reads cards, laughs all the time, and possibly the most positive folks I have met. The older gentleman from Iowa has just put his wife of many years into a care facility for sufferers of dementia, and is travelling whilst his two daughters hold the fort. Desperately sad circumstances. What a glorious evening filled with laughter, sensible conversation and the most wonderful study in human behaviour.
I hope we can repeat the connections on this cruise – a truly wonderful dinner on so many levels. Ready for bed, it should be said.