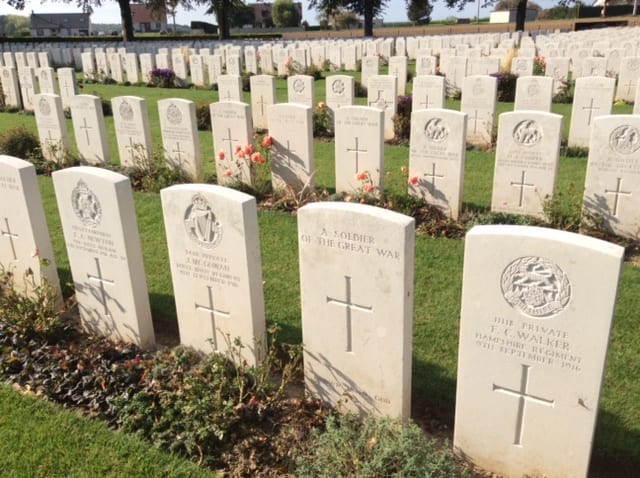 After an outrageously good time in Italy, we flew to Paris. The weather was fantastic, so we walked from the Bastille past Notre Dame and the Louvre, all the way to the Eiffel Tower. Being Sunday Parisians were out in droves, enjoying their open areas, the sidewalk cafe’s and their gorgeous city. Walking along the Seine River on a sunny afternoon is a magical experience. The width of the streets and abundant open areas creates a very different experience to Rome. The buses and Metro Underground a pleasure to use. Paris was part of our journey to the Somme in northern France – battlefields which have beckoned for years.

Outside of the Schengen visa required, I have always been afraid that the scale would perhaps be mind-numbing and nauseating? A dear friend from London, Ruaraidh Adams-Cairns, who has written a book on the Somme and guides there regularly, kindly invited us to join him on these tragic sites.
The challenges for the British soldiers, often attacking uphill across open killing fields, against well-trained German soldiers who had taken care to entrench thoroughly were almost insurmountable. As with almost all battlefields, one needs to look beyond the strategy, when lions were being led by donkeys, and try to focus on individual human stories. Ruaraidh achieves this masterfully, and the nauseating reality was replaced instead by awe at the power of the human spirit, and the bonds between ordinary human beings in those ghastly trenches. Importantly, the British cemeteries (there are 1500 cemeteries on the Somme!) are places of Remembrance, whereas the German cemeteries are places of Sorrow.

The contrast between Portland stone versus black steel crosses is stark. We should all be so grateful to Weare who insisted that British soldiers be buried where they fell, with no distinction made between their graves. The wealthy wanted their boys repatriated, whereas the majority could not afford that privilege. The gravestones shaped in such a way as to represent all faiths, exactly 2’6 above the ground, with lettering large enough that when standing at the foot of the grave no leaning forward was required to easily read the name and inscription. The Commonwealth War Graves Commission does an amazing job of maintaining these cemeteries beautifully. The majority of the cemeteries established in No-Man’s Land between the old German and British trenches.

Regularly we wept looking at graves of teenage boys whose lives had not yet even begun. Imagine the grief of a mother requesting “Will some kind hand in a foreign land place a flower on my son’s grave”? The inscriptions from wives with children back home-it was moving and tragic beyond words.

We drove through numerous French villages, destroyed by artillery, and rebuilt on their original footprints using German funds. Fascinating that Jan Smuts felt the terms at the end of the war were so punitive against Germany that they may lead to a Second World War – how right he proved to be!

Listening to Michael Charton’s sublime presentation “My Father’s Coat” on Friday evening included much about JC Smuts, the revered international statesman and believer in Holism, who along with his United Party was destroyed back home by Hertzog, Malan and the Nationalist Party in 1948. What an irony…

Ruaraidh has written a beautiful book on the top 20 places to visit on the Somme, concentrating on a human story for each site. I am well familiar with the book, and took solace amidst the tragedy from magnificent human dramas. The behaviour of human beings when the chips are down has always fascinated me, and no finer example than the Somme in 1916. This unique experience provided much to reflect upon – my guiding and storytelling, the utter futility of war, how would I react in similar circumstances and our smallness in the greater scheme of Life.

Our time on the Somme concluded with Delville Wood, where the South Africans amongst others were all but decimated, fired upon from 3 sides by ruthlessly efficient German artillery. The old trenches named after famous London streets. Looking down the mown lawn through the Hornbeam Trees, a single Roebuck grazed – it was an utterly appropriate finale’ to our indescribably significant Somme visit.

On a lighter note, we took the train from Arras to Paris, then flew from Charles de Gaulle to Doha on Qatar Airways. Fifty minutes between flights found us rushing the gates “doing 98”, then flying on to Johannesburg. Given the cost of food in Italy and France, it was a real treat to enjoy coffee and a meal at ORT Spur, amongst fellow South Africans. The comfort of familiarity. The small jet to Oribi was full, and I ended up alongside a woman who made me look like Twiggy. She requested an extension for the seatbelt, and the giggles began all about us. I spent the entire flight plastered to the window enjoying sunset over the Drakensberg. Karen, lucky girl, was seated elsewhere. When we stood up, one stranger winked at me, and mouthed “Cosy!”…