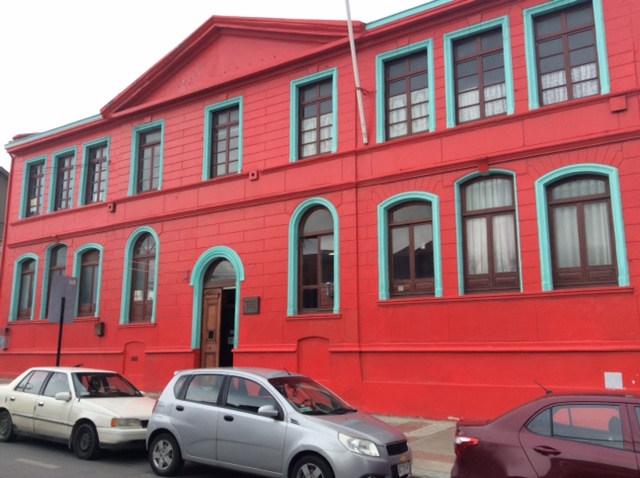 After a wonderful overnight stop in Ushuaia, and glorious transit along the Beagle Channel (Glacier Alley) then Magellan Strait we stopped early this morning at Punta Arenas “Sandy Point” in Chile. Glacier Alley is extraordinary in having glaciers running down to the channel bordered by verdant forests. The forests if one looks west look wonderful, but when one looks east, the trees look sparce and weather-beaten, clearly from the salt-laden westerly winds.

The city of Punta Arenas was officially renamed Magallanes in 1927, but returned to its old favoured name of Punta Arenas in 1938. As with many cities, the port is some way from the city itself, and characterised by a large number of containers, vehicles, warehouses, fishing boats in dry dock, lobster pots, etc. Shuttle buses kindly ferry guests to and from the city, or away on the various tours.

In 1843 Fort Bulnes was built as a penal colony, and to protect Chile’s rights over the Magellan Strait. Magellan attempted a circumnavigation of the world with 5 ships from 1519-1522, and sailed near this spot in 1520. Victoria was the only one of his five ships to complete the circumnavigation, along with 18 of the 265 men who set out. Magellan himself was killed in the Philippines in 1521. A replica of Victoria was built by enthusiasts in 2010, to celebrate the Bicentennial of Chile. This tiny vessel weighs 85 tons, and accommodated 42 men. The claustrophobic conditions onboard beggar belief given our modern, palatial spaces within Seabourn Quest.

My cabin mate, Brandon, from Cape Town, who I have christened the Boy from Bergvliet (Linda Thompson would approve) has worked on this ship for years, and really is very well set-up. He also is a master at getting ready in no time at all. When we have to be on parade at 6:15am, Brandon will be happily lying on his bed listening to music at 6:08. Then, as if tasered, he springs into action. He will shower, change, get a drink and be where required BEFORE me at 6:14. Epitomises Lastminute.com. Ever-smiling, Brandon is liked and respected by all. An outdoor, car, motorbike, camping and travel nut, so we have very little to talk about sadly!

Sadly the original site of Fort Bulnes on the Brunswick Peninsula was too small for a town, but more importantly had very little fresh water. In 1848 the original fort was burnt, and a new one constructed on the site of the present city by Colonel Maldones. This was an important port and coaling station until the Panama Canal was built in 1914. Notwithstanding the immeasurable difference the Canal made to shipping, hitherto forced to sail around the infamous Cape Horn! The coaling too became less important with the development of Fuel oil. In 1948, a replica Fort Bulnes was reconstructed on the original site using original materials and techniques. Visiting the log cabins, sod-walled houses and pile palisade fences makes for a very atmospheric tour indeed.

For those who chose to walk around Punta Arenas on their own, a clean, pleasant city of around 150 000 people awaited them. Probably 50% of this population are ethnic Croats, living where average rainfall is 380mm/year or 15 inches/annum on account of the rain shadow created by the Andes. Since 1986, this population also sadly exposed to dangerously high levels of ultraviolet radiation on account of a very thin ozone layer above. Some street vendors trading on the sidewalks, but in a controlled, tidy fashion. Political and economic unease see the Chilean Peso at 780 to the US$. The Argentinian Peso at 75 against the US$, both literally plummeting before our eyes. Plenty of graffiti on the walls would indicate a growing unease in both these countries.

The imposing, famous statue of Magellan in the centre of the Plaza Independencia (Square) with its beautiful gardens and trees. His big toe rubbed smooth and shiny by those believing that in rubbing his toe good luck will come their way. Four large dogs gambolled about, playing, and chased cars as if this may be part of dogs’ recreation in Chile? Across one corner stood the stately Cathedral of Sacred Heart of Jesus, sadly all locked up today. On another corner stood the Braun-Menendez House, now a National Monument. Sara Braun made her fortunes in sheep farming and shipping to become Patagonia’s wealthiest woman. This house was designed as a Parisienne home, assembled in France, shipped to Punta Arenas and took several years to rebuild in situ. The interior had marble floors, antique European furniture, a billiard room, and central heating-the first in Patagonia, installed in 1906. It is cold hereabouts – today is 8C, around 46F with a stiff breeze.

There is the beautifully maintained cemetery with its ornate conifers, and headstones. A place of contemplation. Looking out over the rooftops, one is reminded that Punta Arenas was formerly famous for its largely red roofs. Along the foreshore the Sailors Monument stands, close to a very colourful playground for kids. As with some places in Europe, there is a site where lovers have placed locks, declaring their undying love for one another. Sadly the locks will inevitably become too heavy for the structure they are locked to, and will have to be removed. The cycle will begin again.

In this labyrinth of land and water known as Patagonia, Punta Arenas has featured strongly as a source of coal, timber, sheep, wool and hides. It is now a very important port, and may become even moreso as a start point for guests taking expedition ships to Antarctica.

Perhaps too, one should spare a thought for Henry Worsley, who died in Punta Arenas on 24 January 2016. Worsley had almost completed the first solo, unsupported crossing of Antarctica (the route his great hero Shackleton had planned in 1914/15), when only 30 miles from his goal peritonitis developed. Worsley waited too long. Eventually flown to hospital in Punta Arenas, where the curtains closed on this extraordinary SAS officer and explorer’s life.