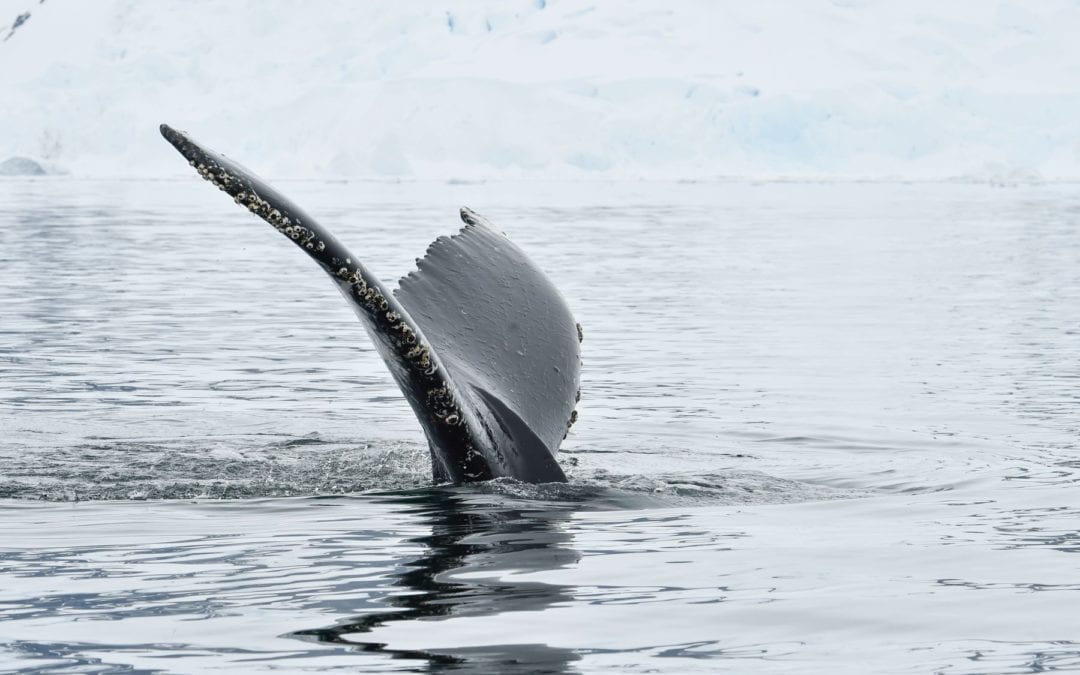 Overnight the ambient and sea temperatures dropped from around 6 degrees Centigrade, to 3 degrees, indicating that we have crossed the Antarctic Convergence zone. The waters south of the Convergence differ greatly from more northern oceans in salinity and temperature. Colder, less saline Antarctic water flows northward meeting warmer, saltier water flowing southwards from the South Pacific, South Atlantic and Indian Oceans. Where these water masses meet and mix, a denser layer is created and sinks flowing northwards. The Convergence is considered the biological boundary of Antarctica. The exact location of the Convergence varies slightly throughout the year, and from year to year. Primary indicator of having crossed the Convergence is a drop in temperature. Sea temperature may drop 5 degrees Centigrade in 20 miles/32 km. Another important feature of the Southern Ocean is the Antarctic Circumpolar Current-the world’s largest ocean current flowing clockwise (eastwards) at a rate of 153 million cubic meters per second, about 1000 times the flow of the Amazon River!
On an unusually calm sea, beneath brighter skies than yesterday, we continue to steam towards South Georgia.

I shared my story about Shackleton, concentrating on the Endurance Expedition. This human drama is considered one of the greatest survival stories of all-time, certainly one of the greatest feats of navigation of the modern age (Elephant Island to South Georgia in the James Caird lifeboat). It is an epic of human struggle, and triumph of the human spirit. After my talk on Amundsen yesterday, the talk was well attended and attention levels were high. Most guests are surprised and delighted that we shall be visiting “The Boss’s” grave at Grytviken on South Georgia. More familiar with the university type lectures offered on board these ships, I hope most guests find my storytelling style refreshing. The Expedition Leader said I looked as if I had been at gym when I finished!

Suzana D’Oliveira, A&K Cruise Director on board, shared the IAATO guidelines for visitors to Antarctica, with a brief overview on the protocols surrounding the decision that this continent be preserved in perpetuity for science and peace. Expedition Leader, Agustin Ullmann, from Buenos Aires, blessed with a wonderful sense of humour, and gentle demeanour, then shared the Zodiac operating procedures in detail. Safety is the first and most important priority on Zodiac operations, and with the excitement levels at fever pitch, many guests forget the requirements to keep the operation safe for all. He also reminded us not to leave our backpacks unattended on shore, since the Elephant Seals are attracted by the colour, and most bags don’t survive being crushed by 2000-4000 kg of seal moving over them like an inchworm. After the briefing life jackets were distributed to all passengers. During the afternoon, we shall be examining clothing and backpacks for any possible biosecurity risks, and vacuuming velcro straps, zips, etc to remove any alien seeds. Boots washed with Virkon.

The Captain has created a competition, and promised a bottle of good French Champagne, to the first guests to spot an iceberg larger than our ship. It is estimated that around 300 000 icebergs exist in the Southern Ocean at any time, ranging from a few meters (growlers) to many square kilometers. Generally speaking, 1/8 of the iceberg is visible above the water line, the remaining 7/8 beneath the water. In the Zodiac safety briefing, Agustin told the drivers that should they have to look up see the top of an iceberg, they are TOO close. Icebergs can roll at any time, becoming more and more unstable as they melt. Pieces of ice often torpedo towards the surface, creating further dangers for Zodiacs. This gorgeous, icy wilderness is no place to take chances with safety-driving through ice arches strictly forbidden. Two seasons back, I vividly recall being close to an ice floe, watching seals, the ice seemingly perfectly stable. As we moved slowly off in the Zodiac, a massive piece of ice flew up from the depths beneath the floe, exactly where our Zodiac had been.

Over lunch, the team were discussing the very real threats posed by the Antarctic Fur Seals. A former team member who was accident prone, apparently was trying to move a male seal away, when he tripped right in front of the animal. This was rather unfortunate as the animal promptly seized him by the shoulder, shook him like a rat, and moved off. Pete said he could see right into the thoracic cavity, so severe was the bite! We are more than a little concerned about the children on board, some of whom are not responsive to instruction. Pete reminded us that they will listen better when they have been charged by a large male Fur Seal! Lunch was interrupted by the sighting of whales close to Le Lyrial, as we approached Shag Rocks. A beautiful Fin Whale, identified by the lower right lip being white, glided past my cabin, giving me a clear view of this identifying feature. Whalers in days gone by found Fin and Sei Whales impossible to tell apart. There were also Humback Whales, feeding, tail-slapping, and generally enthralling the guests just off the bow of the ship. The Whale Whisperer was right (he usually is regarding these marine mammals he loves so passionately) – whales are often found where the ocean floor rises steeply to to surface as it does here at Shag Rocks. Two pointed rock outcrops in the middle of the ocean, occupied by thousands of Shags (Cormorants), and visited by thousands of seabirds.

Larry gave a passionate, sensible lecture on whaling, in terms of its history and where we are today. Sad to consider that petrochemical pollution of the oceans poses a far greater threat to whales than whaling per se’. Russia has taken 20 000 “undisclosed” Blue Whales since 1991 – little wonder their numbers have not been increasing appreciably in the Antarctic region.
The A&K Marco Polo Club enjoyed a magnificent reception, complete with caviar and foie gras, before Recaps and briefing. I had dinner with 3 charming American couples, well-travelled and certainly out to maximise their experiences down here.
Excitement levels on board are at fever pitch with our first Zodiac landing planned for Salisbury Plain, South Georgia in the morning. I doubt any of these guests have an inkling of the sensory overload in store, and the sheer wonder that is South Georgia.