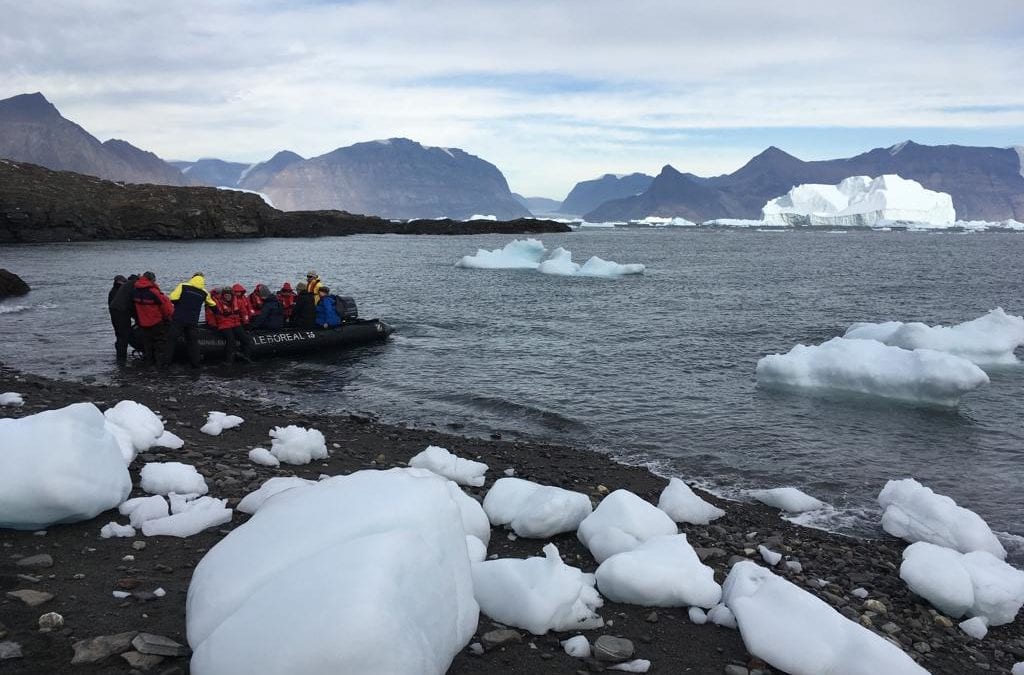 All A&K’s guests spent a wonderful two or three nights at Fairmont Queen Elizabeth Hotel in Montreal, enjoying the beautiful city in glorious sunshine. The walking tours and bus tours were thoroughly enjoyed by all who participated.

Breakfast was served early (4.45am) that guests could begin boarding buses at 6am for the airport in Montreal. As always with A&K, the whole process went swimmingly. Guests confirmed their baggage at the airport, checked in and proceeded to the gate for the 9.55am Charter flight with Titan Air to Kangerlussuaq in Greenland. The three and a half hour flight provided magnificent views of Canadian tundra, and then Greenland. The mystic appeal of Greenland never wanes – rocky mountains plunging into fjords or the sea. From the airport in Kangerlussuaq, guests were transferred to the pier 20 minutes away, by bus. Low tide required careful approaches by the tenders (lifeboats) via a deeper channel, to transfer guests to the beautiful Le Boreal ship.Welcome drinks and snacks awaited all after they had checked in onboard. Baggage was delivered by the delightful crew to the cabins, and at 6pm the mandatory lifeboat drill was performed. What dashing figures we all cut in our bright Orange life jackets, hoping we will never require them. Expedition Director JD Massyn, and Expedition Leader Brent Houston welcomed all warmly, before guests had dinner. With the early start, most guests retired early, as Le Boreal steamed down the fjord towards the open sea, and Sisimiut on Greenland’s west coast.

Le Boreal came alongside early in Sisimiut. Second largest town in Greenland, population of 6000, and just north of the Arctic Circle at 66 degrees North. The brightly colored homes and buildings creating a magical scene in sunshine, the sea perfectly calm. Most guests took the opportunity of either a walking tour or bus tour, led by local Greenland guides. Sod/turf homes (early form of building here) were seen, whale jaw bone arches and working dogs – many looking more like wolves than dogs. After lunch, a champion kayaker came alongside the ship to demonstrate the extraordinary skills of the Inuit kayaker. Dressed in neoprene, riding a modern kayak, he calmly rolled and righted his craft in either direction with impunity. Skills like these are being rapidly lost in the modern world, but for the Inuit crucial to their hunting success and very survival over the aeons of time. Much of the afternoon was spent at leisure, many choosing to take a nap whilst whales slipped past the vessel. Geraldine and Brent then presented the mandatory AECO briefing, safe use of the Zodiacs, before the Expedition Team introduced themselves to the guests. Jason Hicks brought the house down by sharing that he told his wife to be, BEFORE getting engaged, that he rode motorbikes, fired guns/rifles, flew airplanes, and wanted to travel a bit. The travel a bit this year took him away from home for 5 months to date…Captain Garcia’s cocktail party went off with all the usual French flair, and he welcomed guests onboard, whilst introducing his senior Officers and Ice Captain. A magnificent dinner followed for all guests in La Licorne restaurant on deck 2. Guests could not have asked for a finer, more auspicious beginning to this incredible adventure.

After the wonderful Captain’s cocktail party and dinner last night, guests enjoyed a calm 150 nautical mile run up the west coast of Greenland to Ilullisat. Ilullisat sits in a wide inlet off the Baffin Sea, right next to the famous icefjord, first explored by Eric the Red in 985 whilst establishing Norse settlements in Western Greenland. This is one of the fastest moving (40 meters per day) and most active glaciers in the world, Sermeq Kujalleq, now a UNESCO world heritage site. Most visitors know this area as Disko Bay.Ilullisat is Greenland’s 4th largest town, and birthplace of explorer Knudsen Rasmussen. Originally known as Jakobshavn, the history dates back to 1742, first established as a summer mission. It is now an important fishing town, and centre for shrimp processing. During the summer the fish/shrimp plants operate 24/7, and we indeed saw fishermen landing many sizable fish very close to town.Many guests were up before Brent Houston’s 6am announcement, and out on open decks to witness the massive icebergs and abundant smaller floating growlers. The sun appeared over the horizon at 6am, but scarcely made a difference to the 5 degree centigrade chill, made to appear far colder by the stiff breeze. The sights of white and blue ice in the early morning light created a quite indescribable visual feast. Certainly an occasion where one realizes the power of the human eye over any photographic sensor – capturing this scene photographically is well nigh impossible. Humpback Whales swam in front of the icebergs adding to the drama of it all.Half of the guests were ferried by Zodiac to shore, to enjoy tours of the Town, or a boardwalk hike to see the Ilullisat Icefjord, whilst the remainder were taken on a Zodiac tour close to the massive icebergs. Excitement levels were at fever pitch as guests donned their warm clothing and life jackets, in preparation for their first Zodiac tour of this expedition. Expectations in all regards were exceeded, accentuated by little wind and glorious sunshine. The Icefjord beggars belief in terms of grandeur. Running back 65km along the fjord, fed by a mighty glacier from Greenland’s icecap. This glacier moves forward at 40 metres a day, hence producing enormous numbers of icebergs. Regular cracks sounding as much like artillery fire breaking the silence.Recaps and recaps were well presented by Richard Escanilla and Professor Henry Pollack, before Brent Houston gave us the exciting plans for visiting fjords tomorrow. The great weather seemingly continues, as most retired early after a long, exciting, memorable day around Ilullisat.

‘And yet it (sea ice) makes a rare impact on our senses. In its details it has forms changing interminably, and colours playing all shades of blue and green’The dawn brought a fairly choppy sea, through which Le Boreal sailed with scarcely any movement whatsoever. The stability of this vessel is staggering. The morning lecture was presented by geologist, Dr Jason Hicks, regarding Greenland as a time machine. Records prove a dramatic increase in carbon dioxide levels and with that a commensurate increase in average temperature. Warming oceans in turn absorb less carbon dioxide. The implications of a melting Greenland icecap affect ocean levels across the globe. All guests found the climate change indicated empirically here in Greenland very sobering indeed.The end of Jason’s talk coincided with Le Boreal entering the magnificent Uummannaq Fjord System. A geological wonder teeming with marine life, and sheltered by high, glaciated mountains, the fjord typically provides very favourable weather. Often referred to as the sunniest spot in Greenland. Today proved no exception, and most guests were out on open decks watching the wonderland slide by on both sides of the ship. The water punctuated by numerous, large icebergs. Steep, fissured slopes dropping dramatically into the depths. A jet plane high overhead proved an interesting contrast to Jason referring to 1,8 billion year old rock formations below! This certainly is Western Greenland at her very best.Immediately after lunch, a landing was made on Karrat Island, in Karrat Fjord. Behemoth icebergs in the Bay added to an amazing afternoon. Guests visited remains of ancient huts, made of whale bones and sod. Thule people (ancestors of the Inuit) frequented this attractive Fjord system as a safe haven 500-1000 years ago. En route to the summit of the island guests passed a cemetery, and masses of small bones indicating the extent of seal hunting in days gone by.  The summit view over the icebergs and fjords below justified the stiff walk.A&K could not have asked for a finer start to this incredible voyage of discovery. The weather, sights, people, whales and experiences offered in every regard set the bar extremely high for the days ahead.Nikon Photographer Michelle Valberg presented a wonderful lecture on photography, showcasing some of her stunning images, and how she had taken them. As with many professionals, they make it look and sound so easy. In calm conditions Le Boreal sailed further north, on an ocean studded with myriad icebergs.Archaeologist Margaret Bertulli and Naturalist Helen Ahern presented some interesting insights at Recaps, before very satisfied guests enjoyed dinner onboard. It has been an outstanding day in Greenland, tomorrow beckons.

‘It is more dreamlike and supernatural than a combination of earthly features. It is a landscape such as Milton and Dante’ might imagine-inorganic, desolate, mysterious’.Elisha Kent Kane describing Arctic region in 1855.

The morning saw Le Boreal running north up the west coast of Greenland on a calm sea, icebergs everywhere. Naturalist Matt Messina gave a wonderful talk on whales, concentrating on the Narwhal, Beluga, Bowhead and Orca, which everyone is very much hoping to see in these waters. Professor Henry Pollack then presented a somewhat depressing lecture on ‘Ice, Water and Climate’. There is no doubting global warming on an unprecedented scale, clearly indicated by changes in ice and water on Earth. Midday found the vessel approaching the remote, traditional Greenland village of Kullorsuaq. Named after a mountain nearby looking like a huge thumb, the village grew significantly after World War 2, when many local hunters and fishermen moved here. This little village of 420 inhabitants is situated on the Kullorsuaq Island, at the southern end of Melville Bay. The first migrants arrived here some 4000 years ago, making it among the earliest-settled areas of Greenland. The first settlers belonged to the Saqqaq culture, followed by the Dorset culture 3000 years ago, who spread along the coast of Baffin Bay. Archaeology suggests the Thule people arrived in 1200AD. Danish settlers remained unaware of Kullorsuaq until the end of the 19th century. Fishing (including Narwhals and whales) and hunting (including fur seals and walruses) are the primary occupations of the area. A&K have especially arranged this visit to experience one of the most traditional of Greenland settlements.

Captain Garcia has built up a relationship with the villagers over 15 years, and guests were privileged to take themselves off for a walk of this traditional village. It was arranged for 205 residents to come onboard to present a show of dancing and singing. Young and old, tall and small filled the theatre to capacity, and a thoroughly good time was had by all. For our guests this was a special privilege indeed.

From the pool deck on Deck 6, sundowners were enjoyed as everyone waved goodbye to the delightful folk from Kullorsuaq.Photographer Michelle Valberg and Musician Mike Stevens encapsulated the day beautifully at Recaps, particularly regarding human connections. Despite the majestic scenery and wildlife, it is oftentimes the human beings one meets that are best remembered. Tired happy guests enjoyed the wonderful Le Boreal fare and retired early. West Greenland exceeding high expectations.