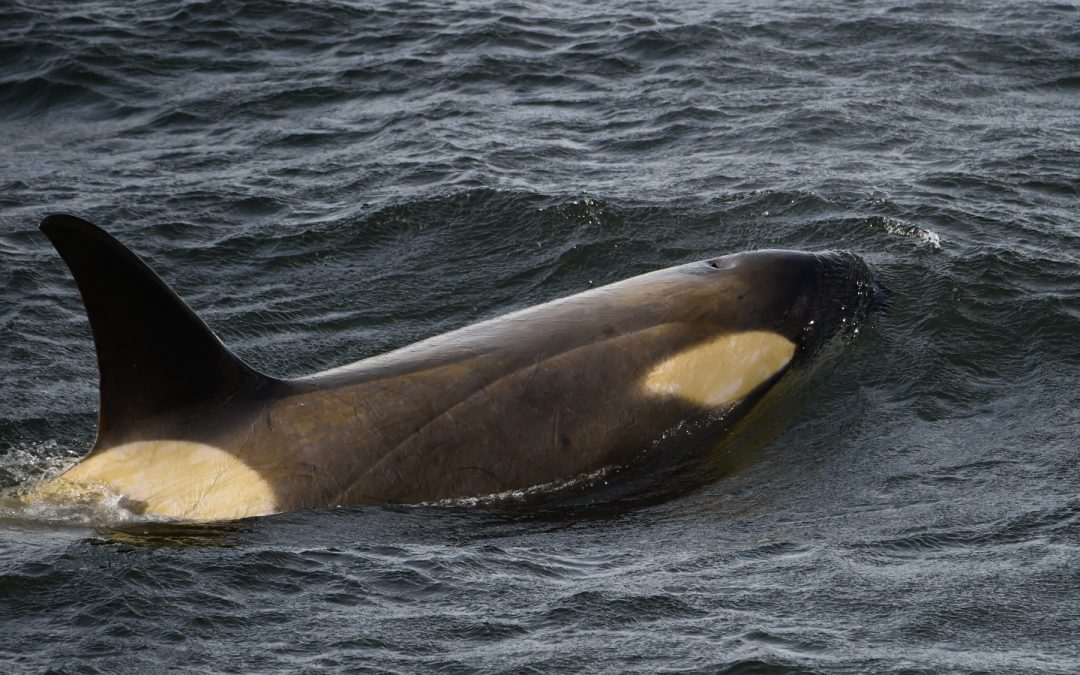 After last evening’s celebrations which went on until 2am, we were out by 8am in the Zodiacs in Wilhelmina Bay. Named after Queen of the Netherlands by de Gerlache in 1897-99, this bay is known for its scenic beauty. On a perfectly calm morning A&K guests could not have asked for a more visually magnificent scene. Blue skies, lots of icebergs in the water, and snow fields as white as recent driven snow stretching off in all directions. Very clear water accentuated the icebergs’ feet beneath the surface. We were taught about the dimpling erosion on icebergs created by eddies of warmer water mixing with cooler water. The lines worn into the sides of icebergs by escaping air bubbles finding their way to the surface. In true A&K style BB’s were taken along. BB stands for Bar Box, holding Champagne and orange juice for a toast out on the water. I proposed a toast on Chris Srigley’s Zodiac, regarding Life’s set prize, hoping Antarctica may be part of our guests’ Life set prize, and that the little white voices will keep calling them back.. A quite spectacular start to 2023.

Le Lyrial then transited over lunch to Danco Island, situated within the beautiful Errera Channel. Guests walked up the slope to view nesting Gentoo Penguins, and either slide or walk back down to the landing site. Of course, the youngsters enjoyed the slides capitally. Heavy snowfalls this year have forced penguins in places to nest on beaches, for fear of their nests being submerged. We saw this at Danco today, and not a satisfactory situation in any way. The penguins need dry land on which to incubate their eggs and raise their chicks. The vistas in all directions from Danco are breathtaking, and the Expedition Team had a tough time getting guests to return to the ship. A sure sign of their enjoyment. The Captain and many crew took advantage of the unusually good conditions, and came ashore. Temperatures so mild that many left parkas, etc at the beach. One of the Zodiacs was found to have a leaking pontoon, perhaps created by the playful biting by the Leopard Seal at Penguin Island yesterday?

During Recaps, Renato’s drone photos of Penguin Island and Deacon Peak had guests exhaling in awe. Rich Pagen followed with entertaining information and video’s about the birds we are encountering. After dinner whales were spotted regularly in Dallman Bay, and enjoyed by all in very calm water.

This morning we visited Neko Harbour, offering vast, perfect Antarctic vistas in all directions. The active glaciers across the bay require that guests do not remain on the beach/shoreline, but get some elevation to stay clear of waves. Not long ago, a calving created waves large enough to flip two Zodiacs on the beach. The large snow chrystals had frozen overnight producing a magic whiteness, but also very slippery conditions for walking. A Gentoo Penguin came and investigated the A&K walking poles in detail, perhaps assessing their suitability as nesting material. Many guests took advantage of a photograph with the number 7 sign, indicating their 7th continent, and the most difficult to get to – Antarctica. I spent much of the morning in shorts and shirt, taking some photos to convince my many doubtful friends. Neko is a true Antarctic Continental landing. Under a cobalt blue sky, and calm conditions, a more perfect setting cannot be imagined. Everyone was overdressed, and returned to the landing site having removed a number of layers.

Lunch comprised the southernmost barbeque in the world, served on the pool deck, with glorious scenery sliding slowly by. The meat meal was enjoyed in two waves (Discovery and Endurance groups) that everyone could sit outside if they chose to do so. The channel we hoped to transit over lunch to Paradise Bay was choked with ice, forcing us to take a detour, pushing afternoon activities 30 minutes later. Indeed the icebergs passing the ship are beautiful, and most impressive in terms of their size.
Perfectly calm waters made for stunning reflections, some so perfect one is left wondering which way is up? For the final day in Antarctica on this voyage, this is quite sublime.

The afternoon activity was a landing at the old Argentine station, Almirante Brown, in Paradise Bay. The bay is aptly named, with icebergs, mountains and glaciers in abundance. Guests enjoyed the different bow landing, where they were required to walk over the bow box to disembark the Zodiacs. Many took advantage of climbing the hill, and sliding down. Others chose to sit and absorb Antarctica at her very best. Many crew came ashore, very kind of A&K to encourage them to do so. The old red/orange buildings (mainly shipping containers) stand in stark contrast to the pristine white snow around them. Humpback Whales were to be seen in the bay ALL afternoon. Guests got into the Zodiacs for a tour en route back to the ship, entranced by the whales, penguins swimming, and a Leopard Seal on the ice floe. Assistant Expedition Leader Chris Srigley floated around in the water in his drysuit, for a reprieve from the heat! Chris announced his engagement today to Christiane who is with us on this voyage. Very exciting, happy news indeed. It was a still, hot afternoon by Antarctic standards, and guests clearly did not want the afternoon’s activities to end.
As if the day couldn’t possibly get any better, a pod of Orcas were spotted by the Bridge Officers as dinner began! The Captain kindly turned Le Lyrial around and returned to these magnificent creatures (giant porpoises some know as Killer Whales). The pod with youngsters moved all about the ship, the 1,8m (6ft) dorsal fin clearly visible on two large males. Absolutely incredible sighting and opportunity for all.