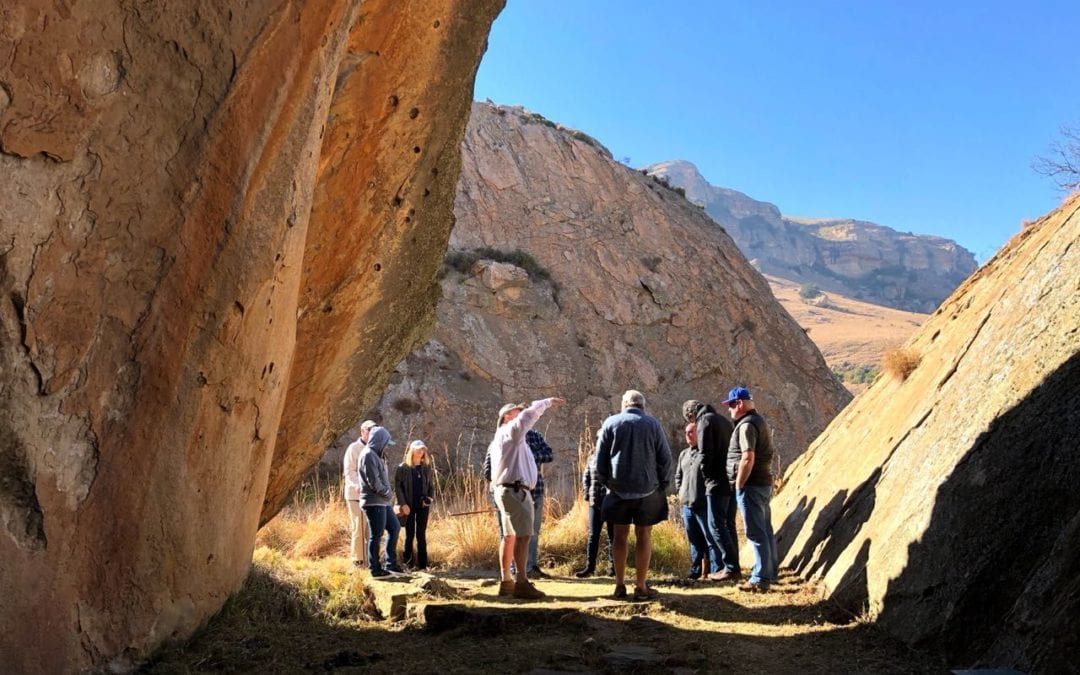 Cape Town appeared impossibly green after recent good rains, and we loved being back in the Mother City.
The following weekend special clients, Jaguar Land Rover in Durban, planned a weekend at Three Tree Hill Lodge. Along with the battlefield tours, nature walks and good company. The intention was to drive up Bezuidenhout’s Pass, and back down Retief Pass on Sunday. Never having been on Bezuidenhout’s Pass before, I decided to tackle the pass on my motorbike as a recce. An Africa Twin is rather heavy for such a challenging, rocky ride, especially ascending, and I had a very interesting day out. Many times I ended up walking alongside my bike, urging her over large sandstone “steps”, ever upwards. Bezuidenhout’s is certainly a rough, rocky 4×4 track, and best attempted with another bike or vehicle, for safety purposes. Alone is far from ideal, or safe.

I arrived at Solly Prinsloo’s farm at 4pm exhausted, filthy and still perspiring wildly from the exertions of the pass. Solly offered me some liquid refreshment, and I promptly downed three large glasses of Coke, my blood sugar feeling somewhat low, having been on the road and visiting Spioenkop since 7am. Over this weekend Solly revealed to Jaguar Land Rover clients that he smelt liquor upon my departure? Feeling this was odd, he called his son only to learn that his son had been to a Parlotones Concert where liquor was very expensive. They had doctored bottles of Coke, one of which I had been consuming! The ride home felt okay, but I wondered why I could not keep my eyes open at a dinner that evening. Can one imagine if I had been stopped by the Traffic Police and breathalysed? We have always maintained “8 hours between the bottle and the throttle”, and I am the last of the big drinkers. Anyway, this story has provided much humour to many, especially Solly-doyen of Retief Pass.

Our Land Rover weekend began at Blueberry Cafe’ opposite Fordoun, with the new microbrewery almost ready to open. We took the Mount West road to Weston Agricultural College to see the Horse Memorial, then on to General Woodgate’s grave, who was mortally wounded at Spioenkop two months before his death.
Glorious weather and special company made for an awesome weekend. We walked over Spioenkop, and collectively gasped at the futility of war, the bravery on both sides, and just how close it had been for the British. Simon Blackburn, owner of Three Tree Hill Lodge, returned from a family trip to Lake Tanganyika the previous evening, took our clients for a game walk in Spioenkop Game Reserve. Guests were delighted to see six white rhino, before returning for sundowners overlooking the dam and Drakensberg.

My feedback on Bezuidenhout’s Pass resulted in our driving up Oliviershoek Pass, to visit Kerkenberg, Retiefklip and the Kaalvoetvrou Monument before descending the wonderful Retief Pass. Guests were charmed at the history and these less-visited spots in our beautiful country. Whilst technology along with Hill-descent Control took care of the steep pass, two Basutho horsemen showed us the way back to the tar road near Drakensville. Watching the ease with which these men rode, covered the country and their pace illustrated powerfully just how mobile Boer commandoes were during the Anglo-Boer War.

A wonderful week, basking in the variety of opportunities this unique vocation presents – inebriated motorcycling excluded!