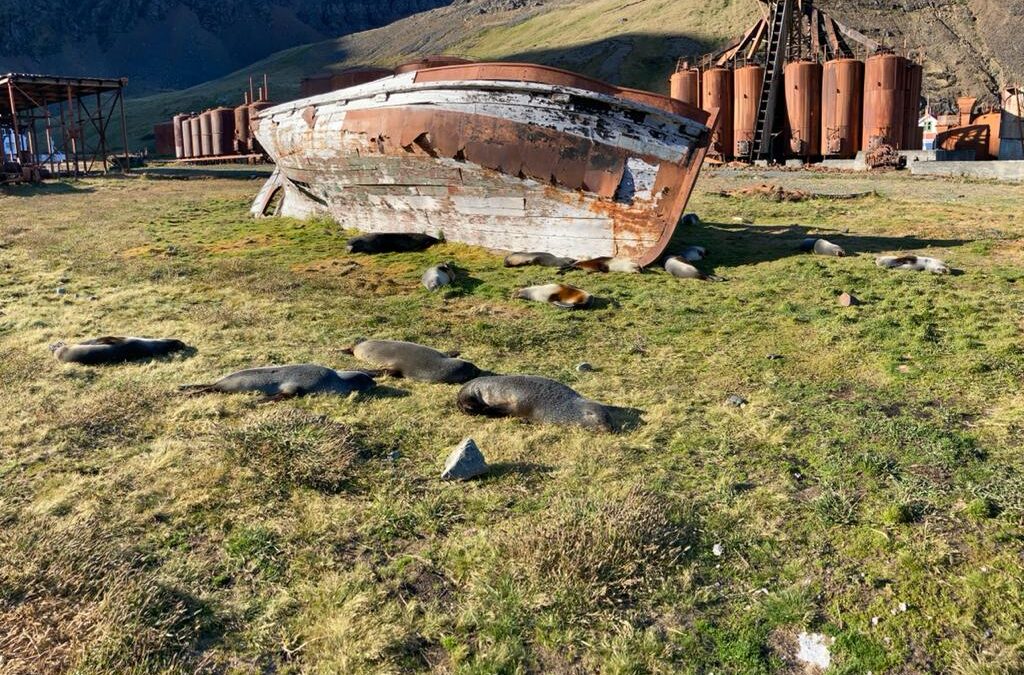 “Southwards a magnificent Alpine country, illuminated by the rising sun, rose slowly from the sea; there were mighty fells with snowy crowns and with sharp, uncovered teeth, around the valleys through which enormous, broad rivers of ice came flowing to the sea.” – J. Gunnar Andersson 1902

After 6 days confined to the ship, we were bursting to get out and go ashore. These 6 days entailed the 2 days between Antarctica and Ushuaia, the day turning ship around in Ushuaia and the 3 day crossing to South Georgia. Although the open water was extremely rough with very high winds, the bay where Fortuna is situated was far calmer and we were fortunately able to land our guests, on their very first outing. Fortuna Bay takes its name from one of the ships Carl Anton Larsen brought down here in 1904 to establish the first whaling station on South Georgia founded at Grytviken. Incidentally largely financed through Argentine backing. Although it was snowing to begin with, and very low cloud cover, this soon changed and turned into a reasonable morning. As anticipated, guests on their first outing/landing cannot control themselves. We had guests literally tripping over Fur Seals, one was chased by a Seal and only heard the last part of my loud “Don’t Run!” and ended up tripping on the rocky beach. Yes, it was pandemonium as we attempted to get guests past the Seals, when all they wanted to do was stop and photograph them. The goal was to get to a vast King Penguin breeding colony about 1.5km from the landing site, one of Nature’s spectacles. The King Penguins, Skua’s, Gulls, Terns and Elephant Seals added to the heady mix. I asked for permission to go and look at a Sealers’ cave, where sealers took cover in days gone by. For our guests’ first landing on South Georgia, it was spectacular.

The plan was to drop our guests off at Maiviken, to hike over to Grytviken. Unfortunately heavy fog made the undertaking risky, so guests walked out of Grytviken instead. As fate would have it, the fog cleared to reveal a beautiful, sunny afternoon, but safety is the first priority here. I spent much of the afternoon in the cemetery sharing details of Shackleton’s passing on 5 January 1922, and how he came to be buried at Grytviken (Pot Harbour, named after Sealers’ tripots). Once again there was much anxiety around the Fur Seals. A barman, unfamiliar with wildlife came ashore, and chose to run from a Fur Seal. Well, the Fur Seal pursued him with intent, and even I was impressed at the young Philippine’s turn of speed. Anyway, I got there in time to intervene, by which time I thought his heart was going to leap out of his chest, and he was quite pale. The guests, including his girlfriend and I, found it all extremely amusing. The guests were given plenty of opportunity to walk on two different hikes, or simply spend time around the cemetery and whaling station.

A friend on the team chose to spread a friend’s ashes in the cemetery near Shackleton’s grave. A very moving choice and process. We have drunk a toast to the deceased friend, and along with a long day out in the elements, I am feeling very weary indeed. Apologies for a short note this evening – I hope to write more tomorrow. I reflect on Scott’s final words in that frozen green tent: “It seems a shame, but I don’t think I can write more ~ 29 March 1912”.
What tough men they were.