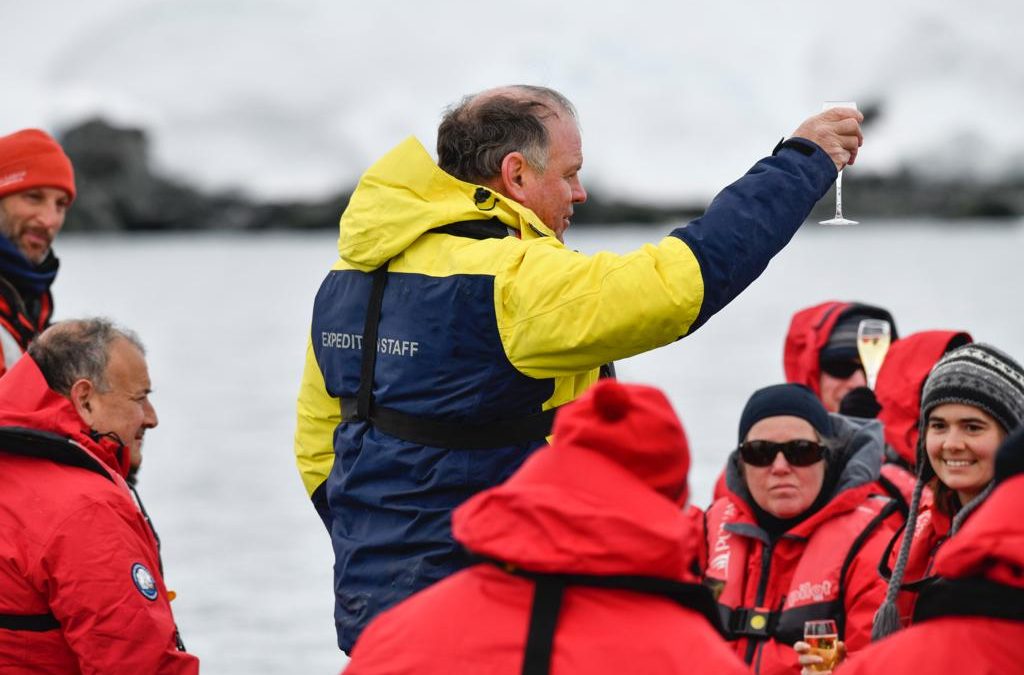 At Sea ~ 29th December 2022
Today was spent at sea, much calmer than she has been. Very little W-I-N-D to speak of. Geologist  Dani Martinioni kicked off the lecture program, explaining his 35 years of geological work in Antarctica, and why the Antarctic Peninsula and Tierra del Fuego are so similar. Marine Mammals lecturer Luciana Motta was up next with adaptations of Antarctic organisms, from lichen to midges and fish, for their lives in frigid environments. Naturalists and our photographer were out on deck to assist guests with identification of birds, and photography. Most dreaming of that perfectly focussed Albatross shot, light on the eye, bird flying into space. Far harder to accomplish than one might imagine.

South African JD Massyn spoke after lunch about the remote Seychelles archipelago, and proposed trip there with A&K in March 2023. For many the idea of a visit to Africa’s east coast, the spice islands of Zanzibar and Pemba, then to move south eastwards to the Seychelles atolls holds enormous appeal. Far less clothing required than Antarctica! A&K Sales Director Kim Gumaraes has had many enquiries onboard in this regard.

I spoke about Scott’s journey to the South Pole in 1911/12. Realising that they had been forestalled by the Norwegians under Roald Amundsen 34 days previously, did Scott’s team die psychologically? Not one of his party of 5 made it back to the hut on Ross Island alive. In retrospect, geologist Raymond Priestley said “For scientific leadership, give me Scott. For swift and efficient travel, Amundsen. But when you are in a hopeless situation, when there seems to be no way out, get down on your knees and pray for Shackleton.” Scott’s team still had 36 lb (16kg) of geological samples on their sled; they literally pulled themselves to death.

I sat with the delightful South African Hellmann family (12 people) for dinner. Ladies changed places after each course, and much fun was had.
After dinner, and fun Karaoke session was enjoyed in the main lounge. If visibility permits, it is going to be a very early start in the morning to view behemoth tabular iceberg A76, which measures 100 miles (160km) long and 25 miles (40km) wide.
This really is a once-in-a-lifetime opportunity.

Today began very early for many onboard Le Lyrial. Suzana announced over the PA system at 3.30am, that we were alongside behemoth tabular iceberg A-76. This ice berg measuring 100 miles (160km) long and 15 miles (24km) wide, has broken off the Ronne Iceshelf in the Weddell Sea. In terms of size, is larger than South Georgia, or Long Island, NY. With only 20% above the water line, it is almost impossible to imagine, let alone describe, its magnificence and dimensions. The excitement amongst the A&K guests, having a true once-in-a-lifetime experience was fantastic. An iceberg like this may ground itself in shallow water, and begin to break up, or continue to drift north-eastwards with the currents. One of Nature’s great phenomenons, and currently the world’s largest iceberg.

I spoke about the Backstage Boys (not a band) – the individuals who deserve to be better-known in terms of Polar exploration. Wilson/Bowers and Cherry-Garrard on the Winter Journey to collect Emperor Penguin eggs, Tom Crean and Bill Lashly, Mawson and their eastern sledging journey disaster, etc. Dani Martinioni followed with a talk on glacial ice. After lunch The Endurance movie was shown, with original footage from Frank Hurley. This tied in beautifully with my lectures about Shackleton, as we make our way towards Elephant Island, so central in the Endurance story. Recaps was a riotous affair with Shackleton’s Whisky, JD Massyn’s rendition of Ponting’s Inside/Outside Reindeer skin poem, and the Team trying to sing Frankie Wildo!

By 6.45 we were approaching Elephant Island and Point Wild. In quite exquisite light, with sun and high cloud, we neared the spot where Shackleton left Frank Wild in charge of 21 men for 4 months and one week, before being able to return and rescue them on 30 August 1916. Russ Manning spoke about his special, old friend Bob Burton and the recently named Robert Burton glacier. Guests lined the decks to view the scene, Pardo’s bust, and the spot where the two upturned lifeboats afforded the 22 men meagre cover/shelter. Rob Caskie reminded us of the term “little white voices” coined by Shackleton and Wild, which he hopes will keep calling us back too. An utterly appropriate entree’ to Antarctica, and fitting way to round out 2022.

This is the Antarctica A&K signed up for, having dreamt about for years…

“The New Year is a painting not yet painted, a path not yet stepped upon, a wing not yet taken off! Things haven’t happened as yet! Before the clock strikes 12; remember that you are blessed with the ability to reshape your life”. Turkish Playwright and Thinker Mehmet Murat Ildan.

Our morning outing, to Penguin Island, first sighted by an 1820 British Expedition under Edward Bransfield, was sublime. Beautiful weather greeted us under blue skies, as we took to the Zodiacs for a long 1,5 mile transit to the landing site. Despite no wind, there was plenty of swell and brash ice, making for a very exhilarating ride for the A&K guests. Being low tide, necessitated a climb over boulders once out of the Zodiacs. The Expedition Team were on hand to assist us with the challenging terrain. A breeding Chinstrap penguin colony, along with a 2 mile hike up the Deacon Peak 170m (560feet) to summit the old, red volcanic crater, provided us with plenty of options. The beach was littered with whale bones, Skuas, Terns and Giant Petrels nest at the site, and tremendous vistas over vast snowfields had most guests walking about, their jaws agape. Antarctica in all her glory, on the last day of 2022.
Luciana Motta presented Antarctica -A land of Records mid-afternoon. Highest driest, coldest, windiest continent on Earth. But the superlatives don’t end there, in terms of ice depths, lack of habitation, Circumpolar Current and so on. Brilliant.

At 6.30pm, we threaded the needle of Neptune’s Bellows into Deception Island’s sunken caldera. This horse-shoe shaped cauldron-like structure or caldera, was created more than 10 000 years ago by an explosive eruption that scattered more that 30 cubic km of molten rock – the largest known eruption in the Antarctic area. The only other active volcano is Mount Erebus on the Ross Sea quarter, above McMurdo Sound and base. Officially discovered by Captain William Smith in 1820, the sheltered anchorage has been used successively by sealers, whalers, ship repairmen and latterly for science and tourism. Two successive eruptions in 1967 and 1969 went unpredicted – remarkable failures in the history of volcanic monitoring! The British researchers having to request Chilean evacuation assistance TWICE in 2 years.

Tonight a magnificent Gala dinner was served for New Year’s Eve, the dancers put on a lively show at 10pm, and the revelry continued into the wee hours in true A&K style, with Paul Carter spinning the discs. I was asked by Marco to propose a toast, after our Team dinner together. It was completely unprompted and I would far prefer to have done so before having a drink, rather than afterwards! Happy, safe, blessed 2023 to all readers.