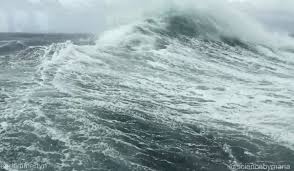 The ocean really was on its head this morning, as we approached Grytviken and King Edward Cove. Plans were to go ashore using the tenders/lifeboats, the only landing on South Georgia where more than 100 guests may disembark at once. The South Georgia Government officials were collected and came onboard, to clear our vessel, and perform their detailed Biosecurity checks. The Expedition Team waited at the Marina, to be inspected whilst the wind speed continued to escalate. The Captain was becoming anxious, but we had to get the officials back to shore, despite our proposed landing having been cancelled for safety reasons. By the time the officials were taken back to King Edward Point, the wind was a constant 70knots/126kph. The wind and waves practically stopped the lifeboat a number of times, but the officials were safely returned to shore. Then the real struggles began – getting the lifeboat back onto Le Lyrial. Guests and staff alike watched in awe as the highly experienced deckhand team battled the wind, lifted the lifeboat and secured it safely back onboard. Both anchors were dragging and the Captain struggled to hold Le Lyrial in position using power and bow thrusters. I stepped in at short notice and gave an illuminating, hour-long presentation on Shackleton, who lies buried at Grytviken. I also explained the white cross at King Edward Point, which was erected initially by Shackleton’s men in his memory. Many guests are bitterly disappointed not to be visiting his grave ashore. The wind has effectively denied our guests one of their three days on South Georgia.

By lunchtime, the ocean was a tempest. All outside deck areas closed. The Captain attempted to turn the ship. The wind broadside on listed the vessel over to 35/40 degrees, causing many breakages in galleys, dining rooms and cabins. It felt decidedly unsafe, and clearly impossible to turn in this hurricane-force wind. The bow was once again pointed into the wind, and we sat the afternoon out reversing slowly since the wind was blowing us backwards at 3knots, waiting for nature to settle somewhat.

Lectures were laid on by Astronaut Susan Kilrain and Photographer Michelle Valberg. Times/conditions like today’s are a clear reminder that these expeditions are entirely dependent on prevailing conditions, and the most important is W-I-N-D. Today South Georgia felt like the birthplace of the winds.

At Recaps Suzana D’Oliveira explained carefully what had transpired today with the winds, supported by weather charts. The listing of the ship was severe enough to lift the tiller out of the water, hence aborting the turning attempt and reversing to find calmer waters! Thankfully the winds should ease up considerably from midnight, and a beautiful morning is anticipated in Gold Harbour.

Today our plan was to visit Gold Harbour, named after iron pyrites (Fool’s Gold) in the rocks here. Considered to be one of the most beautiful visitor sites on South Georgia. The wildlife abundance is impossible to describe. The swell after yesterday’s wind was considerable, providing huge changes in surge at the marina/stern of Le Lyrial. The possibility of a Zodiac becoming trapped beneath the stern of the ship, or being tipped over whilst secured to the ship was very real. The Expedition Team got ashore, along with 3 guests Zodiacs, but the swell and irregular waves at the landing site were unsafe, and Marco called off the operation within minutes. The Captain, Suzana and Marco, with their “Can DO ” attitude quickly repositioned Le Lyrial into Moltke Harbour in Royal Bay.

Moltke Harbour was chosen as base for German meteorological work in 1882 (International Polar Year), and first research station on South Georgia. The swell and intermittent wind permitted a very successful operation. Guests enjoyed Elephant Seals, Fur Seals and a large colony of nesting Gentoo penguins. Wind made the Tussock Grass look much like velvet.  After the wind scuppered all plans yesterday, it was fantastic landing on South Georgia, surrounded by lofty peaks and wildlife.

Over lunch, the ship moved further south, into the dramatic Drygalski Fjord. This 7km long fjord situated on a major geological fault line, provides a dramatic visual feast. Geologist Jason Hicks explained the geology, and how the two sides of the fjord are completely different geologically. This was all reinforced beautifully during Recaps. I told the story of Scott’s journey to the South Pole, resulting in the deaths of all 5 men in the party.

The atmosphere onboard this evening is buoyant. Guests have clearly been enthralled by the magic of South Georgia, and are very excited to be heading to Antarctica. I sat with a delightful group of 12 guests from Chicago, but found chatting about the Zulu War, SA politics, storytelling somewhat challenging in a noisy dining room.

Pleased too, to turn clocks back an hour this evening upon retiring..

Geologist Raymond Priestly said “For scientific leadership give me Scott, for swift and efficient travel Amundsen; but when you are in a hopeless situation, when there seems to be no way out, get down on your knees and pray for Shackleton.”
No Friday the 13th blues for us, as we proceed south-west towards Antarctica on a very calm sea. As Marco says about sea days – Back to School. Jason Hicks gave a magnificent presentation on ice. There is infinitely more to the white, blue and clear stuff than meets the eye. Roughly 90% of Earth’s fresh water is held in Antarctica’s ice.

The Naturalists spent time on the outer decks assisting with bird identification, whilst the Photo Coaches assisted with photography. The Prions and Snow Petrels proving very difficult to photograph on account of their movements and rapid flight. Ornithologist Patri Silva’s lectures are packed out. Patri’s style is inimitable, the sense of humour immaculate and her imitation of penguins’ calls and movements worthy of an Oscar.
Whales and dolphins of the Southern Ocean were discussed by Pierre Richard. Our very own British Antarctic Survey (BAS) Base Commander Russ Manning gave an insightful, entertaining talk about life on an Antarctic Station. Russ has spent two winters back-to-back in Antarctica, and really is the real deal. Russ is our Shackleton, if we were in a real jam, we would turn to Russ who treats a Zodiac as an extension of his body, and knows these parts intimately. One does not easily acquire the experience of 36 years working in Antarctica, as Russ Manning has done. Russ was so engaged in his subject that he also went way over the time allocated. This A&K Expedition Team has around 400 collective years experience of working in Antarctica, adding immeasurably to the guests’ experience.

Some guests who have enjoyed multiple trips with A&K were invited to a private Marco Polo cocktail party with the Captain and Senior Officers before Recaps. Recaps was a lively, laughter-filled affair with Shackleton Whisky, Sex in Space (or lack thereof), and Michelle Valberg reviewing some guests’ photographs. Most hilarious were Paul Carter’s whale shots in which no whales were visible, and the horizon ran at 30 degrees across the image.

I sat with 4 charming American guests. Two Cardiologists with 5 kids, and a Dentist with 6 kids. We spoke about what men and women first see in the other gender. The female cardiologist went on about the brain being a woman’s largest erogenous zone, then spoke about butts and the V on a sculpted male abdomen. I had no idea what she was talking about! The Dentist notices women’s teeth first.

We discussed lecturing techniques and lecturers in detail, which I found fascinating. Clearly 4 very intelligent listeners.

Today was another peaceful day at sea, punctuated with enrichment lectures, wonderful food and whales. During the morning, presentations were offered about some of the lesser known characters in Antarctica, and Susan Kilrain spoke about the Space Age. Sea days are a time to rest, and recharge before the activity of landings begin again in the morning. Part of the afternoon was spent cleaning boots, outer clothing, Velcro and zips in order to fulfill Biosecurity requirements before we go ashore in Antarctica.

We enjoyed an early Recaps, with tales of The Ancient Mariner, Herbert Ponting’s poem about Reindeer skin sleeping bags which JD Massyn executed sublimely, and the the Expedition Team sang Frankie Wildo. This song is all about the 21 men left in the care of Frank Wild on Elephant Island, living under two upturned lifeboats. As we approached Elephant Island around 7.20pm, Jason Hicks spoke about the geology of the Island, where Shackleton’s team first made landfall late in April 1916.

Guests asked for a suggested reading list, which we have compiled and printed for them.
I spoke about the arrival of the desperate group at Cape Valentine, and their movement to Point Wild, where they camped until Shackleton was able to rescue them on 30 August 1916. Speaking on the PA system with the expectation around birds and whales proved challenging. A group of huge Fin Whales created great excitement all around the ship. These Cetaceans second in size to Blue Whales usually move away from ships, so their remaining close to the ship was a massive bonus for all the guests, desperate to start seeing whales.

Dinner was somewhat delayed by Elephant Island and the whales, and guests went to bed early in preparation for an early start on Penguin Island in the South Shetland Islands tomorrow morning.

For those interested in the specifications of our huge luxury yacht, Le Lyrial. Built in 2012, she weighs 11 000 tons. Overall length 142 meters, Breadth 19 meters, Draft 4.90meters. Two asynchronous motors, offering 2300kW each and both fixed pitch propellers turn inward. Maximum fuel capacity is 600 000 litres of diesel, enough for a run from Marseilles to Ushuaia. Imagine the cost of filling up! The Rolls-Royce stabilisers measure 5 meters x 1.5 meters, same size as the pectoral fins on a Humpback Whale weighing 50 tons. I cannot help feeling the Humpback Whale has the better deal? The ship is sleek, fast, comfortable with a shallow draft, and capable of cruising at 16 knots all day (29kph). A trip of 900 nautical miles from Falklands to South Georgia requires 60 hours travel time at a steady 15 knots (15 nautical miles per hour). A knot is 1.8km/hr.