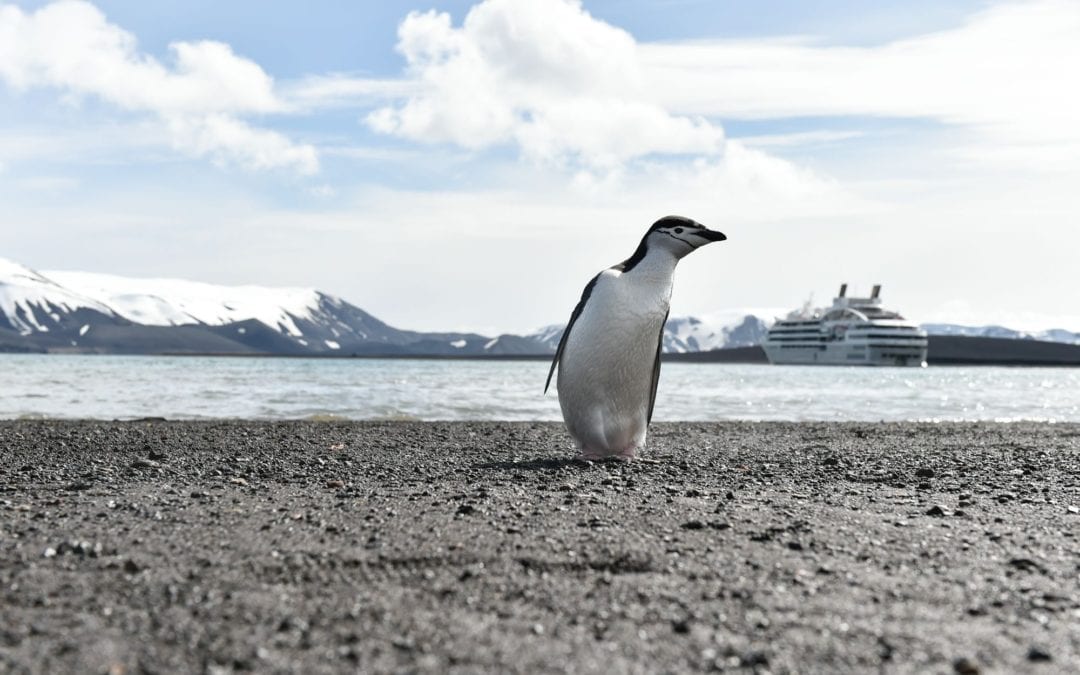 “We will open the book, its pages are blank. We are going to put words on them ourselves. This book is called Opportunity, and its opening chapter is New Year’s Day.” Edith Pierce.
Some of our guests partied the night away, retiring between 3 and 5 am. The Ukrainian stage manager, Denys, is not only a wizard with sound, lighting and AV, but clearly a very talented DJ too. From the kids to the Captain, everyone is talking about his fantastic music last evening around the pool deck, with many guests choosing to swim (heated pool) at some point. All round a wonderful evening on board.

With an Argentine Navy vessel nearby, resupplying Camara Research Station, we anchored close to Halfmoon Island, on the eastern side of much larger Livingstone Island. The naval vessel departed at 8am, by which time we had been receiving guests ashore from 7am. Halfmoon is a tiny island, used as safe anchorage by sealers as early as 1821. Known for its Chinstrap Penguin colony, the greater appeal lies in the surrounding scenery offered by Livingstone Island. In calm conditions, with the sun creating a visual feast, we looked out across the bay, Minke Whales evident, at mountains and glaciers tumbling into the ocean. Larry showed delighted guests two young Elephant Seals, Matt explained the behaviour of two gorgeous, cat-faced Weddell Seals, whilst Penguin Princess Patri hosted and directed at the Penguin colony. Many guests were exhausted after their celebrations last evening, but certainly were not going to miss out. Without snow the ground was very muddy, and we all cleaned our boots with brushes at the shoreline before boarding the Zodiacs. With the regular boom of ice cracking, guest after guest commented on this being the Antarctica they imagined, only impossible to describe or record accurately digitally. Our eyes and senses clearly infinitely better than sensors at appreciating Nature’s bounty here. During the morning, the wind picked up dropping the temperature appreciably. Antarctic Terns and Kelp Gulls share the high rock outcrops for the nurturing of their young, whilst ubiquitous Skuas patrol overhead. From a logistics perspective, Halfmoon is a delight. The bay is sheltered and affords our ship close anchorage to the landing beach. The landing beach is honestly sloped, comprising pebbles rather than rocks facilitating landing enormously. For those unfamiliar with this type of operation, landing an empty Zodiac and departing with a loaded Zodiac carrying 10 guests ideally requires a beach with an honest gradient and some swell to get the laden craft back off the beach.

Over lunch, Le Lyrial sails the 30 miles separating Halfmoon from Deception Island – our afternoon destination. Restaurants are quiet, guests may be resting in preparation for another extraordinary Antarctic experience. Probably the most famous island in the South Shetland archipelago on account of being an active volcano. Its name refers to its deceptive appearance, looking like an island rather than the collapsed caldera with a very narrow entrance, making for an unusually large, protected harbour. Used by American and British sealers originally, as early as the 1820’s, and accessed via the narrow entrance known as Neptune’s Bellows. Threading the needle through Neptune’s Bellows at 2pm had guests out on decks and balconies in awe of the careful navigation required. The channel is as narrow as the ship is long (440 feet).
Guests looked around the old whaling station, which ceased operating as such in 1931 – the boilers and whale oil tanks still present. We spoke about Operation Tabarin which established Base B here in 1944, and the subsequent activities of the British Antarctic Survey along with the building of an airstrip and substantial hangar. Volcanic eruptions in 1967 and 1969 saw the place eventually abandoned completely. Wooden buildings, a shadow of their former selves, and rusty metal remains provide a glimpse into a once vibrant base and entry point into the Antarctic Peninsula. Passengers were pleased to take the fair hike up to Neptune’s Window and look out towards the Peninsula, passing a young, moulting Elephant Seal along the beach. The Argentine vessel referred to earlier cruised past, resupplying a base in Telefon Bay.

At Recaps Wayne Ranney, geologist, gave us a fascinating talk on Volcanism in Antarctica, along with wonderful photos of the eruptions at Deception Island. His description of the volcanic history of Brown Bluff was concise and easy to understand, vert well done indeed. Richard Harker taught us much about photography on smartphones, wowing the audience. Agustin briefed us on the activities tomorrow with Cuverville, Neko and Lemaire Channel in the offing and great weather expected. Many guests are planning an early night – last night and today’s excitement has clearly been intoxicating and wearying.

Today has been a significant day for me, for many reasons. At lunchtime, instinct told me to check on an old friend, Charley Wheatley, struggling with cancer. By way of some background, on my very first trip with A&K, it was marine biologist Charley who showed me around, and took me under his wing. This A&K team communicate subconsciously and silently; for a newcomer trying to be incorporated, it is extremely difficult, especially as the ONLY newcomer back then. Charley facilitated that process in his own unique, gentle, special way, as a long-serving member on this team, actions for which I shall always be indebted. Having recovered from cancer in an eye, Charley once again has faced the dreadful C, with extraordinary tenacity and stoicism. My enquiry at lunchtime, however revealed that the end was near. I communicated this with the team, to their horror. In fairness, days on expedition are full, and thoughts like these are often not converted into action. Our thoughts and prayers are with Charley and his wonderful Victoria tonight as we sadly anticipate the curtains closing on a life well lived, and a much-loved member of our team. Looking out my window, the Antarctic feels like a cold and lonely place tonight.

Charley’s old friend, and fellow marine biologist, Larry Hobbs drew the short straw on that voyage, and had to share a cabin with me. Despite many years as Expedition Leader, a full ship necessitated shared cabins, and Larry was extremely considerate of me, and the challenges of sharing. Larry is a deep, spiritual human being, Whale Whisperer and the real deal with unusual Life experience. Larry often spends time in the peaceful cathedral in Ushuaia. We have a Secret Santa arrangement within this team, and Larry had left his gift buying to the last possible moment. My kikoi, which Karen was incredulous about, was a hit, and very happily received by Russ Manning, our very own wild man from Borneo. I received a set of small clay dolls, painstakingly hand-painted and carefully packed in sawdust. After my news regarding Charley at lunchtime, we spent a cold afternoon at Whaler’s Bay on Deception Island. Between the groups landing, my dear, special friend Larry walks across to me, to share some hot, sweet black tea (Larry’s core gets cold on extended landings). He told me how, at the Ushuaia cathedral a nativity scene was laid out on sawdust made of hand-painted clay dolls. Larry bought it as his Secret Santa, and was delighted that I was the recipient. I had no mechanism of knowing who the unusual gift from and never would have guessed its significance.
The Universe is clearly sending us messages, and these deep, personal interactions that so enrich our lives proceed unabated.