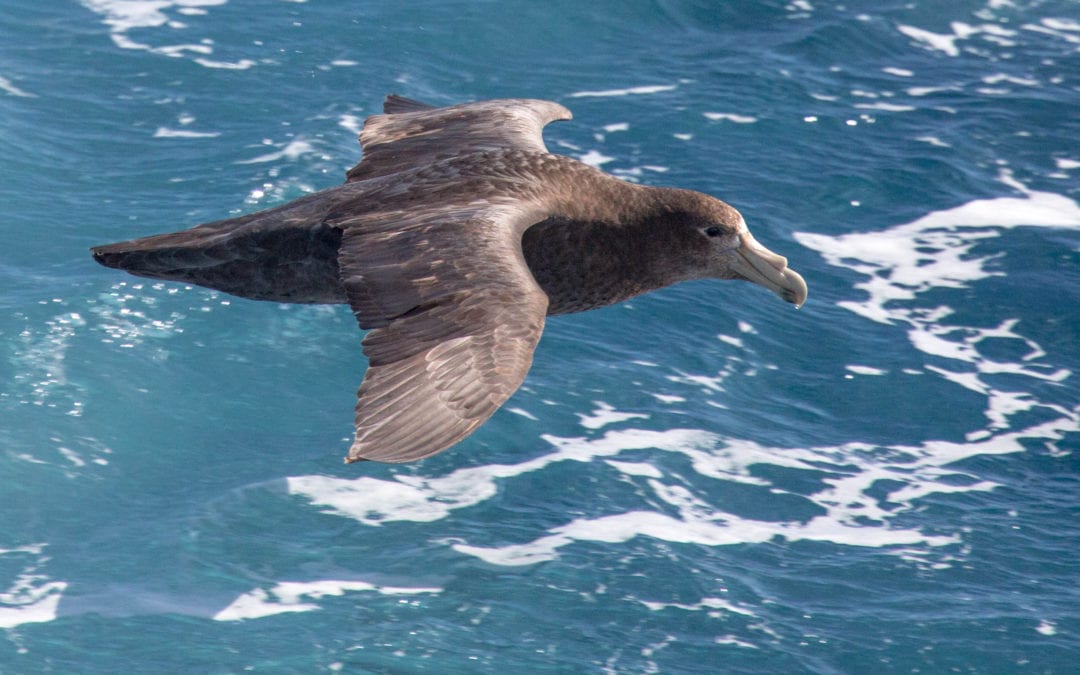 Last evening our new guests arrived at Le Lyrial between 4 and 5 pm. After lunch at the Arakur Hotel, many had gone on a hike, and brought a huge amount of mud on board via the soles of their boots. It is easy to see how grass seeds, etc are easily transferred to places like South Georgia and Antarctica in this manner. Little wonder we take such care in the cleaning of all equipment prior to disembarking. Ship’s staff who had so diligently cleaned Le Lyrial, were once again working hard to get the vessel back to her usual, spotless self, whilst the guests sipped champagne. There are large Indian families from the States, complete with nannies. After an opportunity to exchange their rental boots, guests took part in the mandatory life boat/abandon ship drill. Excitement levels at dinner were palpable as we slipped down the Beagle Channel. Bunkering of fuel took place between 10pm and 3am at Port Williams in Chile. The Chile/Argentina border runs down the middle of the Beagle Channel. Apparently the fuel is considerably cheaper in Chile. Le Lyrial has capacity for around 120 000 litres of diesel – sufficient for an uninterrupted run from Marseilles to Buenos Aires. The Captain often asks for volunteers amongst the guests to bring their credit cards and pay for the fuel – there were none last evening.

On this cruise I have been moved to a smaller cabin, without a window, just a tiny porthole. Sharing with a geologist from the US. Such is life on these expedition ships. Larry tells me that in days gone by, with another company, the gym was closed and expedition team members slept in the gym. Given that scenario, this is positively palatial. The dry, air-conditioned environment does not suit my throat and nose, however, and I am sorely missing a cabin with a door for some cold, fresh air. Even legs and arms are grateful for some moisturiser.

What a wonderful way to start the day, on an open deck, Evaporated Milk coffee in hand, looking out over a calm Drake Passage. Ernest Hemingway wrote “The old man knew he was going far out and he left the smell of the land behind and rowed out into the clean early morning smell of the ocean”. In the distance we could just see South America disappearing, as we make our way southwards.

After guests had the opportunity to exchange their Parka jackets, Patricia Silva began the enrichment lecture program, with her presentation on Sea Birds of the Southern Ocean. Patri spoke about the threats to sea birds, their fidelity to breeding sites and to partners, feeding habits and mighty flight paths. Various species were shown – perhaps the best aids to identification being Patri’s imitation of their flight patterns. A Giant Petrel, covered in blood, looked more like a lion at its kill, and the genteel Wilson’s Storm Petrel (Jesus Bird) dancing over the water’s surface. Guests are so looking forward to seeing these birds, and learning to identify them with the aid of naturalists on deck daily. Photographing them is the real challenge.
Richard Harker spoke about photographing Antarctica to a large audience, and the challenges with white/grey backgrounds, cold, rain and snow, the difficulties of getting to eye level with the subjects, etc. With much advice around basic camera set-up, Richard mentioned that the best camera is the one on you, and available for immediate use. He cited an example of a Leopard Seal chasing two penguins, which took refuge in the Zodiac. The only person who got a photograph, was the Zodiac driver on his cell phone. Interesting how many guests are using cell phones as their primary cameras, and the picture quality is excellent. Portable, always accessible and so convenient to share on social media platforms. Richard takes magnificent photographs, and guests are fortunate to have a man of his ability and patience to assist with their photographic experience down here.

The Young Explorers (there are 22 on board) have excitedly begun their program with Helen and Dean. There are many adults who would love to be part of the program. At the Welcome ceremony, Jannie told everyone about the CCTV cameras, and knowing what we are all up to. This was aimed at the youngsters, some of whom were very poorly behaved on the last voyage, and caught out “on camera”.
I spoke about Amundsen – the Norwegian who took the prize. Without any images, I explained Amundsen’s career, the Belgica Expedition, then being first through the North-West Passage. With vast Polar experience, he raced Scott for the South Pole, after Cook and Peary claimed to have reached the North Pole a year apart in 1908 and 1909. Amundsen would be first to both Poles in due course, and died in an air plane crash searching for arch-rival Italian Nobile, in 1928 aged 56. Perhaps the greatest Polar explorer of them all. Tom Henshilwood from Cape Town has joined us, and we had an interesting chat about sextant, almanac, chronometer, compass and sledge meter after my lecture.

Olga, one on the Ukranian singers, is singing in the main Salon on Deck 3, with not a soul paying her an iota of attention. Larisa, the classical pianist, is being treated similarly in the Observation Bar on Deck 6. It must be such a thankless, demoralising job to be sharing your talents so beautifully and ignored by everyone present. Ever the professionals, these young women all dress beautifully and acquit themselves with distinction – guests are very fortunate to have them on board. During the turn-around day yesterday, two pianos on board were being tuned by somebody who appeared to have stepped straight out of a Harry Potter movie. With a long, grey beard, he appeared completely focussed on the piano’s. With subtle turns of his head, he looked so much an owl trying to focus on the exact whereabouts of a mouse in the grass. The Steinway on Deck 4 will be tuned next. These heavy instruments are wheeled out, and secured to the floor. During recital, the Steinway is opened and a camera focussed on its workings, that the audience be even more involved in the performance.

Larry Hobbs, who has not an ounce of blubber on his body, titles his talk “Where blubber is not a bad thing:the Whales of the Southern Ocean”. That Larry loves whales is abundantly clear, and some of his anecdotes regarding studying these gentle giants are hilarious. Everyone is hoping to see whales, so guests love to learn more about these creatures, their migrations, breeding habits, how to identify them and their communication/songs. With information too about the three Seal species we are likely to see, and footage of Orcas hunting, it was a wonderful presentation. If there ever was a Whale Whisperer, Larry Hobbs is he.
Recaps involved the Antarctic Convergence Zone, the Beaufort Scale for wind and weather, the incredible flight abilities of Albatrosses, before Suzana ran through the lecture program, etc for tomorrow. Captain’s Dinner has been combined with New Year’s Eve for tomorrow evening.
I sat with two American ladies for dinner. Clearly the Dining Room was not expecting as many guests for dinner, but there were not enough menus, service was slow, and many guests were remonstrating with the Maitre’D, which is so unlike the main dining area. Something tonight was out of coulter.