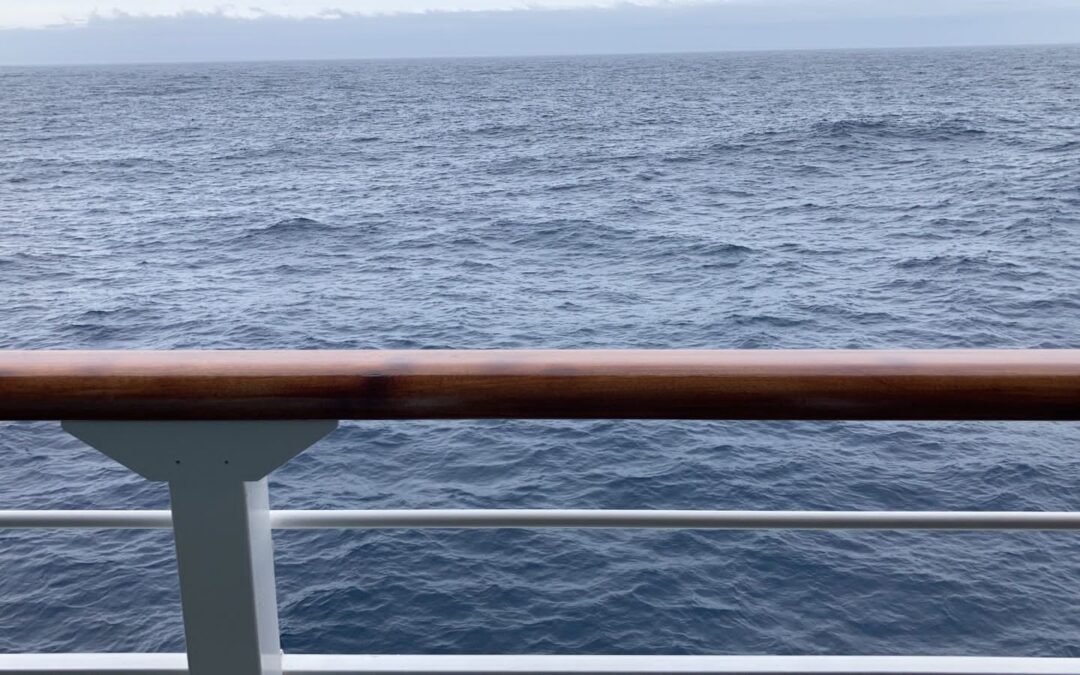 Having decided to move on from Fugitives’ Drift, and not wanting to be perceived as a one-trick pony, I began actively researching stories of early Antarctic Exploration, with the fervent hope of getting invited to go to Antarctica on ships one day. Stories of Captain Scott of the Antarctic had captured my imagination as a child, and it was a place I desperately wished to visit. Thankfully that plan bore fruit, and my first trip to Antarctica was with White Desert on 14 December 2011, to speak about the race between Amundsen and Scott for the South Pole. It is incredible to consider what a journey this has been since then, and this year my nephew, Sam Speed, is working for White Desert in Antarctica.

Many guests asked me about the conditions in the Drake Passage, and whilst always impossible to predict, I told them not to even think about it. At times I fear people think themselves seasick before the journey even begins. Last night the Captain mentioned good weather and conditions in the mighty Drake Passage, and that the gentle 3m swells from behind would create a gentle motion on the ship. He added that we should sleep like babies! With most guests tired from their travels and early start in Buenos Aires, the Captain’s predictions turned out to be absolutely correct. Our traverse of the Drake slightly different to the usual, since we are heading first to the South Orkneys. Many spent time out on the open decks this morning in relatively warm conditions, enjoying the pelagic birds flying around the ship. Albatrosses always creating much excitement. Parkas were exchanged. Susan Kilrain, the astronaut and Navy test pilot, created much mirth by arriving with a pair of waterproof pants three of her could happily have fitted within.

Most visitors to Antarctica for the first time want to know more about the penguins, whales, photography and an overview of the continent, hence the lecture line-up today. Patri (aka Julia Roberts) gave an introductory lecture on the birds and penguins of the region, complete with her mimicking the sounds and movements of her feathered friends, especially the birds in tuxedoes. Michelle Valberg, Nikon Ambassador for Canada, followed with a presentation on use of light, concentrating on foregrounds and backgrounds, subject placement, etc. Michelle illustrated using some of her absolutely exquisite images, and the guests loved the presentations. Both Patri and Michelle are enormously approachable and willing to share their vast knowledge willingly. Team members are delighted and grateful to be working again. Interacting with wonderful A&K guests such as we have onboard at present is an absolute pleasure.

Quietly spoken, unflappable marine biologist, Rich Pagen, gave an engaging presentation on the whales of Antarctica, including the rarely seen/known Beaked Whales. These gentle giants of the deep seemingly have never recovered from the whaling period. The numbers of whales slaughtered during that time versus the numbers seen today are grossly disparate. Everyone hoping of course to see Orcas, of which there are 4 different types. Originally named Type A/B/C and D. Rich is keeping an eye on the water temperature, wanting to show guests the drop in temperature once we cross the Polar Front/Convergence Zone. Attending the enrichment lectures is a very pleasant experience indeed – one can make a cup of tea or coffee upon entry, take up a seat and be royally educated. Team members spent time on the outer decks assisting with bird identification, and Michelle assisted with cameras/photography.

Rich was followed by a charming fellow I met down here in 2016, geologist, Wayne Ranney, from Flagstaff, Arizona. Wayne explained how Antarctica is the 5th largest continent on Earth, but the highest by average elevation. The ice in parts 3miles thick (4,8km), but closer to 2 miles on average. Coldest recorded temperature at Russian station Vostok is -92C. Most fascinating was the continental drift over the past 200 million years. Around 30 million years ago, Antarctica separated from South America creating the infamous Drake Passage. Importantly this geological separation, along with Australia’s separation much earlier created a free-flow of ocean current around Antarctica (the Circumpolar Current). This massive current effectively isolates Antarctica’s weather system, thankfully. The highest, driest, coldest, windiest continent on Earth. Wayne explains these complex matters very well, that there were many Aha moments amongst the listeners. The Earth’s composition of core, mantle and crust beautifully represented by a peach pip, fruit and skin!

The staff onboard are charming and extremely helpful. Wonderful to be on this journey together on Antarctica Day – the 60th celebration of the signing of the Antarctic Treaty, preserving Antarctica for research, peace and posterity. This evening, the Captain’s Welcome Dinner was held, senior officers onboard introduced to the guests, before the guests sat down to a sumptuous meal.