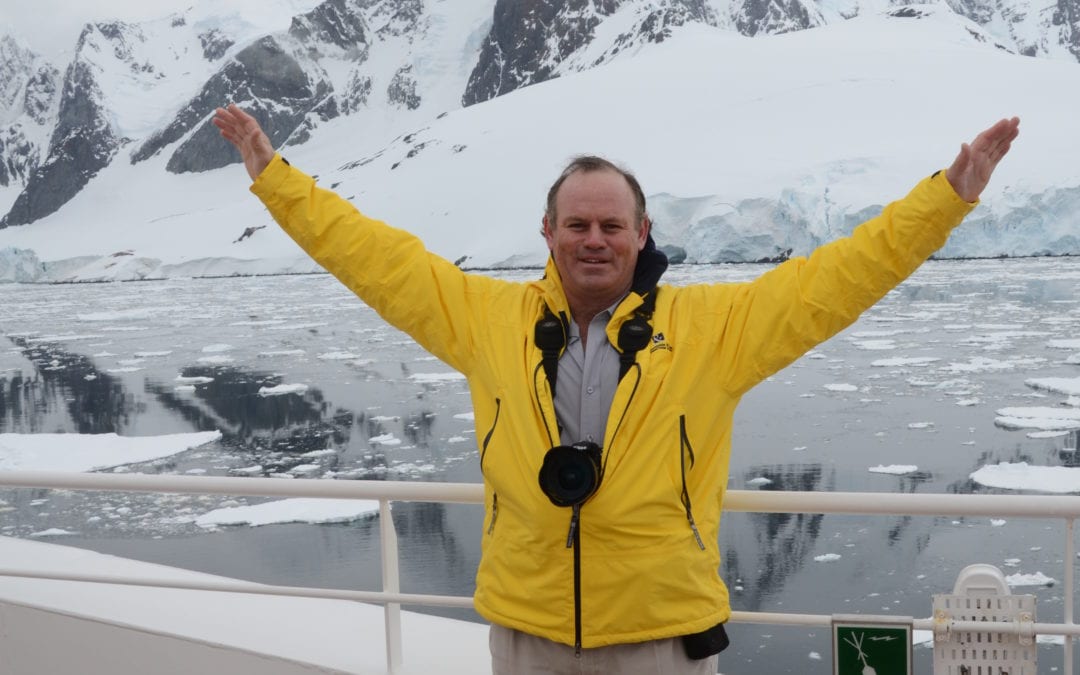 Last evening, we joined Nordic Walking Instructor, Ricky Deutsch and his lovely wife, Diane, for a meal in Prego – one of the speciality restaurants on board. It was a great evening. Karen and I enjoyed the rack of lamb, the likes of which we cannot recall – it was exquisite. Not unlike Brexit in the U.K., talk of Trump, etc proved just how divisive a figure he is. Politics is clearly a sensitive issue the world over, before conversation turned to American inclination to sue. The Wheel of Life turns, and I am left wondering where this process is going to lead. Imagine walking into a sliding door on a ship and suing the ship, or buying a cup of coffee at a drive-through, spilling it on your lap whilst driving, and suing the vendor?! A very interesting evening indeed.

The Captain (Norwegian Egil Giske) very kindly invited Karen to join me on the bridge this morning. It reminded me of kids on Christmas morning – Karen was up early, dressed and ready way before our agreed time. For someone who loves ships as Karen does, this was such an unexpected bonus, and she loved the experience. The visibility was excellent as we looked at Cape Valentine on Elephant Island, and Endurance Glacier where Shackleton’s desperate men made their first landfall after 17 months at sea, and on the ice. We watched whales through binoculars, Hourglass Dolphins; beautiful and graceful black and white creatures, Giant Petrels feeding on dead penguins, whilst Gentoo Penguins porpoised through the ocean beneath us. I made a commentary, before the officers took the vessel around the island towards Point Wild on the northern side. Point Wild is notoriously blocked by pack ice, and beleaguered by fog, but today the Gods smiled upon us. In clear conditions we could clearly see the beach on which Wild and 21 men sheltered under the lifeboats for more than 4 months, and the presumptuous bust of Captain Pardo. The fact that these souls overwintered here in 1916 without loss of life still beggars belief.

As soon as our ship turned north towards the Falklands, I spoke about Shackleton, having borrowed a stick from a guest. Incredible how comforting it was to speak with a stick once again. General Sir Michael Rose then followed with his second lecture on the complex, tragic Falklands War. The breakdown in communication, some of the tactical decisions made, and the geography of San Carlos harbour, amongst other factors kept the conflict on a knife-edge for weeks. The sinking of the Argentine Belgrano early on, also took much sting out of the Argentinian effort – more than 300 lives lost.
Destination lecturer, Ken Rees, who covered the war out of Buenos Aires, gave an overview on the Falklands. There is no doubt that the war in 1982 was a pivotal moment in their history, and the islands would never be the same again. They are however now a self-sustaining community, with much revenue generated via fishing licenses and tourism. The last census proved that 99,9% of the population wish to remain British!

During the afternoon we watched a moving film, Harry and Snowman, about a Dutch immigrant to the US, who rescued a white horse off the butcher’s truck. He and the horse became national showjumping champions in the US. A true story, with commentary by the rider aged 85, and his family made for an extraordinary tale of hard work, dedication, relationships and the power of the human spirit. I was moved enough by the story to take myself off to pound the decks in walking shoes. With a strong, icy wind blowing, one side of the ship is protected, the other is not. I joined US Ambassador Marc Ginsberg for nearly an hour, then proceeded alone – it was cathartic, and a special way to reconnect with the Southern Ocean. Marc admitted to thinking that my luggage had not arrived, when he saw me step up to speak in shorts! I am clearly an oddity, in shorts offering storytelling rather than the more usually anticipated lectures on board.

With coffees from The Bistro, lunch on the Lido Deck, ice cream from the ice cream bar, we are feeling spoilt beyond description. By way of a holiday, this is utterly indescribable. Being overwhelmed often comes up in our conversations together. The ocean is beginning to heave. Winds of 45 knots are expected tomorrow, from the front, and I fear many guests are going the be changing their views on the relative calmness we have enjoyed thus far
in the Southern Ocean.