A day in the South Shetlands – Yankee Harbour and Deception Island 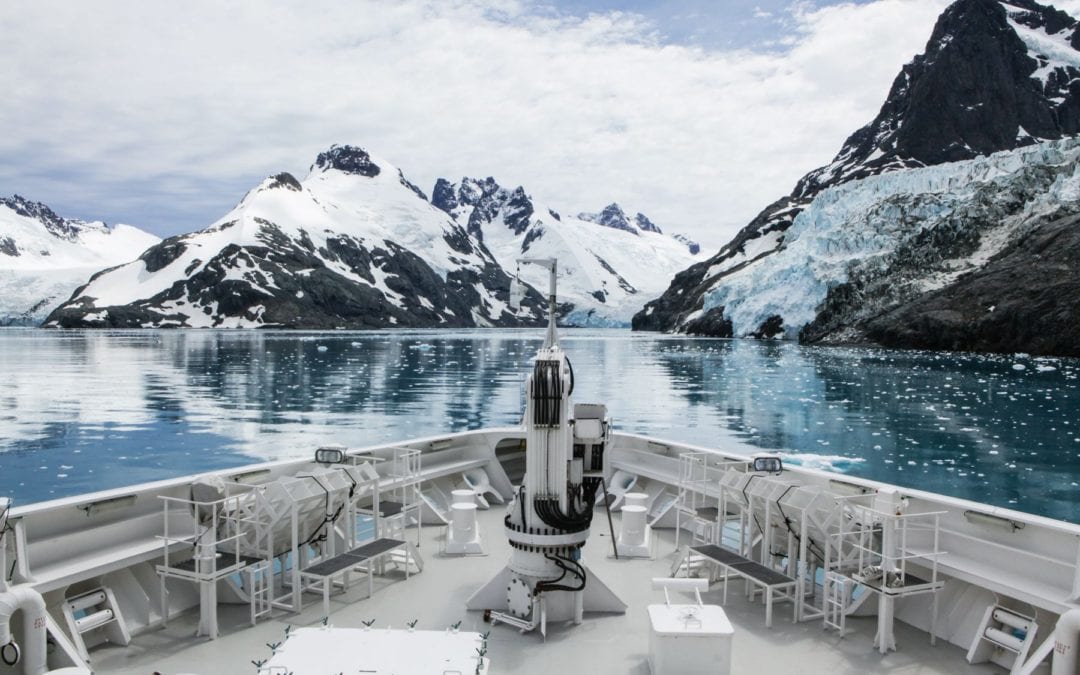 Guests often ponder the range of a vessel like Le Lyrial. In Puerto Williams we took on 200 tones (200 000 litres) of diesel for this expedition. The engineers tell me that with full tanks, Le Lyrial can comfortably sail from Marseilles to Buenos Aires, very impressive indeed. If one is not paying the fuel bill, of course.
In glorious weather we arrived early this morning at Yankee Harbour, a small harbour between Glacier Bluff and Spit Point in the south west side of Greenwich Island. The protected bay offered better anchorage than nearby Half-moon Island, and has been used by sealers and whalers since the 1820’s. The name Yankee probably associated with American sealers. Old sealers’ tripots still lie on the beach, where we established a landing site for very excited guests at 7am. Interesting how many guests anticipated Elephant Island to look like South Georgia, and the contrast was stark. This is clearly a very different part of the world, with nothing green. This is now an environment of black and white, blue and grey, the land of ice these guests have dreamed of visiting. As a first landing in Antarctica, conditions could not have been better. A very calm sea, comfortable temperatures and sunlight on the surrounding mountains initially. Guests were able to walk along a level, long spit of beach, looking at Chinstrap Penguins, and a large breeding colony of Gentoo Penguins. Seals on the beach added interest, but central to the experience was walking, awed by the Antarctic scenery about us. As mentioned previously nothing can prepare one for your first sighting of Antarctica, and this morning reaffirmed that irrevocably. Low cloud cover and mist characterised the scene by the time the second group was due to depart, but in all respects a fantastic landing.
I asked one guest why there was an Error reading on his camera screen, to which he replied his camera had “frozen up”. I thought nothing further of it, until I saw him again on the second group’s slot, and he told me he had left his memory card on board the ship!

Two wonderful, short movies were screened before lunch, providing an overview of Deception Island’s history, and Antarctica. Almost everyone on board turned out to watch the movies, such is the excitement of being here.
A mixed grill was served, and enjoyed on Deck 6 at lunchtime. The quality of food on board is simply sublime, continuously. Lots of protein in the mixed grill, and when we were going to scout at Deception Island, Pete Clement, a Falklander, upon having his senses seared by the powerful sulphurous fumes in Deception Island, suggested we had all had too much lunch! The atmosphere within our Expedition Team is simply awesome, and lots of fun and banter is enjoyed all the time. I try to give as good as I get, but in this multi-national group I am often the subject of much ribbing. On the way back to the ship, I was teased about the volume of my commentary on shore regarding the history of Whaler’s Bay. There must be some advantage to having a whisper audible at 50 yards in my game?

Magnificent navigation by the Captain and his officers in very poor conditions (low visibility) with snow and mist, entranced guests as we slipped through the narrow Neptune’s Bellows into the ancient caldera of Deception Island. All ships have to travel close to a cliff on the starboard side, to avoid a pillar of rock below the waterline which protects the harbour entrance. Many ships have made dreadful mistakes entering this bay. A recently active volcano, and one of the most famous islands in the South Shetland archipelago. Discovered originally by American sealers (Palmer) in the 1820’s, the name derives from appearing an island rather a caldera with a navigable entrance! Most early mariners sailed past the narrow entrance without ever seeing the protected inner bay. Once discovered, the island became a centre of activity in the region precisely on account of the large sheltered harbour. Initially a whaling station, then ship repair yard before Operation Tamerind in 1944 established Base B for the British Antarctic Survey. An airstrip and hangar followed, until massive volcanic eruptions in 1967 and again in 1969 saw the base abandoned. The lava and mud flows significantly altering the base and surrounding landscape, destroying much of both.

Our landings took place with constantly falling snow, transforming the place into the most beguiling Antarctic landscape imaginable, with us being part of the exquisite experience. Guests moved about the beach, seeing Leopard and Weddell Seals, took note of the old whaling station, water boats and whale bones. Covered in snow one could sense them feeling that this is the tour they signed up for. Children built snowmen in deep snow, having the time of their lives in relatively comfortable temperatures. By the time both landings were over, the team were rather wet and ready for a hot drink back on board Le Lyrial. As they might say in North Yorkshire, it was a “thin afternoon”, and a long time to stand out (5 hours) in constantly falling snow.

Patri spoke about Krill at Recaps. These wonderful crustaceans looking like tiny shrimps can live for 11 years, and form the basis of the entire Antarctic food chain. Krill gather microscopic food particles with their front legs, which form a feeding basket, and swim with their rear legs. In winter they feed upon the algae underneath the sea ice. Much about their complex life cycle remains a mystery, but females lay up to 10 000 eggs which sink to depths of 2500 meters, and go through various phases/forms before becoming the Krill we understand as feed for much of the regions creatures. Krill are now harvested for human food, aquaculture feed and sport fishing bait. The shell contains high levels of fluoride, so the shell needs to be removed immediately to prevent this contaminating the flesh. At this stage limits are set at 600 000 tons of Krill being harvested annually. Commercial Salmon flesh would be a bland white colour, were it not for the krill fed to the fish before processing.

The wonderful movie March of the Penguins was screened at 9.30pm, much to the delight of many on board. Tomorrow we go to Cuverville Island and Paradise Bay, with a special communal dinner planned for Christmas Eve. I shall do my best not to ruin the Christmas carol singing, never one of my strong points, it must be said.
This A&K expedition continues to exceed very high expectations on every level.