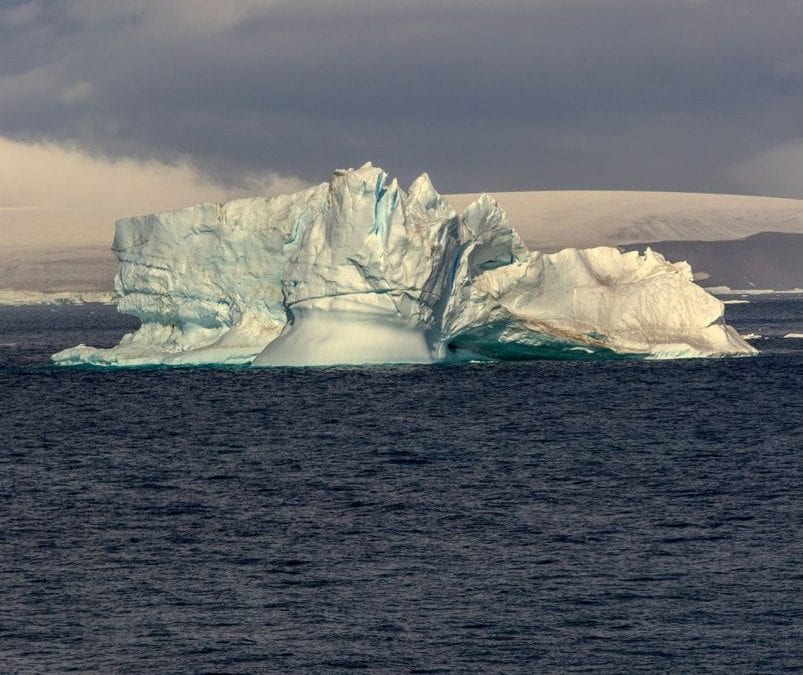 Sir Raymond Priestley wrote “For scientific discovery give me Scott; For speed and efficiency of travel give me Amundsen; but when disaster strikes and all hope is gone, get down on your knees and pray for Shackleton.”
I used these words, amongst others, to propose a toast to The Boss at his graveside in Grytviken. Like teabags, Shackleton showed his true strength in hot water. In the most dire of circumstances, he turned out to be an extraordinary leader of men. We hope later today to view Elephant Island from the ship, so central to the Shackleton/Endurance saga.

Patri Silva gave a masterful presentation on the Evolution and Biology of Penguins, recommending the work of Thomas Huxley. A fossil was found, complete with feathers, in Paraguay, estimated to be 36 million years old, and larger than an Emperor. Their evolution is a tricky subject as they are very widespread. The fantastic adaptations described in detail, from incubating on their feet, huddling together for warmth to searching for food from below. Emperor Penguins carry air within their feathers to give them a jet blast, as they exit the water from their deep dives. Breeding is brought on by length of day, along with ambient and water temperatures. Averaging between 8 and 11 km/hr in the water, these birds in tuxedo’s really do fly in their watery medium.

Great excitement was created by a massive tabular iceberg at 11am. This 20km long behemoth has been adrift for 17 years already. With 45 meters of beautifully level ice above the waterline, there is around 300 meters below the waterline. Guests streamed outside to take photographs. Many took pictures of me in shorts, them clad more like Shackleton wannabes. In fairness, the temperature was bracing, and most folk were not out for very long. The excitement that Antarctica lies just over the horizon quite intoxicating now.

Geologist Ian Miller from the Denver Natural Science Centre gave an insightful talk on Deep Time Climate Change. With scientific evidence, Ian shared with us a time when there was 6 months of daylight, followed by 6 months of darkness. temperatures being estimated by the serrated or smooth edges of leaves found as fossils. There were also disturbing tables of climate warming, glacial recession and so forth.

Antarctica is dedicated to world peace and scientific research as a result of the operation of the Antarctic Treaty of 1959.  This Treaty diffuses deep differences over territorial sovereignty and establishes an effective basis for cooperation among all countries interested in Antarctica.  The unique legal system established by the Antarctic Treaty applies to 60 degrees south latitude.  Antarctica belongs to the world, and those working here are subject to rules and measures formulated under the Treaty to protect this remarkable part of the Earth. We are governed by careful guidelines laid out by IAATO.

It is wonderful to see guests joining one another at meal times, new friendships formed and the excitement of Antarctica on the horizon.  Our table enjoyed a lively discussion about Wilbur Smith, Laurens van der Post, Ted Talks, motivational speakers, and the derivation of the term being in the lime light.  During the afternoon, Liz Huffman gave a presentation on the World of A&K with particular reference to the expedition ship departures around the globe for 2018 and 2019.  Interesting to note that Japanese voyages are fully booked for 2018.  Guests were invited to once again vacuum their equipment and clean their boots for complete bio-security clearance going into Antarctica.

Larry Hobbs gave a magnificent lecture on his life of work in the wild and sustainability.  In the midst of incredible tales of wildlife experiences, it was announce on the PA system that the mist had lifted and Elephant Island was clearly visible.  A fire could not have cleared the theatre more effectively.  Guests streamed to outside decks and balconies to get their first view of an Antarctic landscape.  And it was clearly overwhelming.  I do not think that anybody can be sufficiently prepared for their first view of the frozen continent.  From the ship we could see Cape Valentine where Shackleton and his 27 desperate and emaciated men first made landfall in April of 1916 after 17 months at sea and on the pack ice.  To add to the wonder, spouting humpback and fin whales and porpoising penguins were seen all around the ship .  After this magnificent intermission, many guests returned to the lecture theatre for Larry’s experiences insights into our globe where human beings are 1,000 times the mean population of mammals our size.  He stressed the importance of asking the right questions rather than trying to solve the problem by means that are clearly ineffective.  In a sobering photograph, Larry showed the brilliant lighting of squid fishing boats off the coast of South America almost as bright as Buenos Aires.  Tragic to consider that that fishery collapsed completely last year – to Larry’s point of unsustainability.

I enjoyed dinner with two delightful American guests who enjoyed time at Savanna with Paddy Hagelthoorn in 1996. We discussed at length the notion of trying to secure decent guides before placing priority on accommodation and food? The world is indeed a very small place – I met a guest whose brother studied the same course as I did at University, from Zimbabwe.