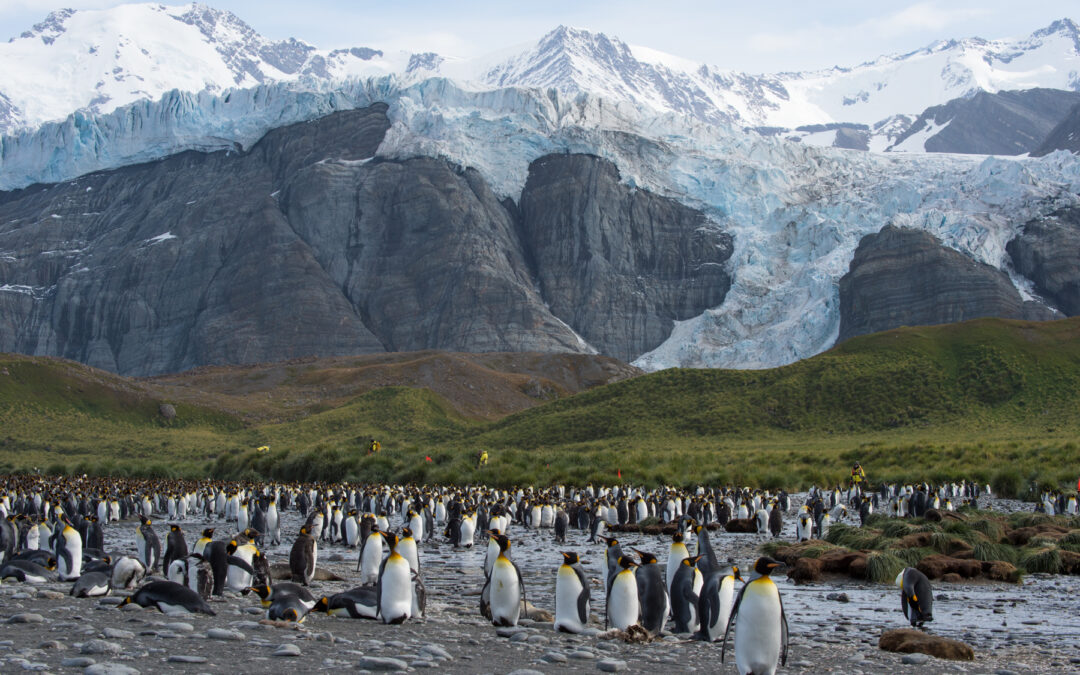 25 December Christmas day en route to South Georgia
“Christmas, a perfect time to express affection for your family, to forgive those who failed you and to forget past mistakes.” – unknown writer. These words resonated powerfully with me on this 3-day crossing from Ushuaia to South Georgia. So many Christmas gatherings were ruined this year by Omicron, and many folks could not be together due to travel restrictions. Three central figures on our team are absent since they come from New Zealand.
Onboard we had our Christmas dinner last evening. The galley prepared magnificent food, the Expedition Team sat together, and let our hair down. After singing Christmas carols for the guests, which we feel dreadfully ill-equipped to do, we drowned our embarrassment in alcohol. It was an uproarious evening, and hugely enjoyed by all. I left the tables first, feeling that any longer may render me unable to safely make it back to my cabin! The ship’s movement accentuating the notion that all may not be completely as it should be in your world? After two busy, demanding voyages thus far, and an easy day at sea scheduled for today, we felt we could relax somewhat last evening. It did us all the world of good.
The Captain and his team very generously gave all of us a box of Argentinian chocolate biscuit treats (dulce de Leche). They really are dangerously good. Santa Claus appeared out of nowhere, and handed out vast amounts of chocolate and candies to old and young alike, despite almost expiring from heat in his Santa outfit. I was mightily grateful it wasn’t me! We had a Secret Santa gathering, where gifts are exchanged amongst the Team. The limit being $20, but some of the gifts appear more pricey than that. I was lucky enough to receive a beautiful Yeti drinking cup/flask for road trips. Ideal for battlefield trips, and early starts on road trips. Some got dry bags, Marco got a new waterproof watch, which he really needs. On Half Moon Island I noticed his watch was incorrect, and commented. Marco tried to adjust it and the winder came off, leaving a small lever sticking it. I passed him a multi-tool saying be careful, as Marco is a big, strong fellow. Well, you guessed it – one pull and the whole lever came out of the watch. He needed this replacement which hangs off his radio harness on his chest. Cobus got my Amarula Cream liqueur and fudge, and has lots of offers to help him consume it.

Rich and Kristin asked me to come and share some stories with the Young Explorers (under 18, of whom there are 14 onboard). I shared some tales from my Flickering Embers repertoire to an entranced audience. The youngsters immediately requested I come back for more. Geologist Jason Hicks joined the kids, and seemed to enjoy the tales as much as they did. The Young Explorers came to thank me, as I was getting out of the shower. So wrapped in a towel, I had a group of wide-eyed teenagers deliver me a thank you card. Rich took photos much to my acute embarrassment.  These youngsters will never take me seriously again…

Cruise Director Paul Carter has a gaudy, multi-coloured Christmas jersey, with flashing LED lights. Only an eccentric Englishman could pull wearing this off successfully.
Cabins onboard of vessels like these are very well insulated, and the doors close extremely securely. My cabin is at the front of the ship, right next to the Bridge, and WiFi signal is poor hereabouts. I have learnt that by placing a boot in the door, keeping it ajar, improves the signal that I don’t need to go into the corridor every time I wish to send a message or email. Bridge Officers have passed some very incredulous glances, as they pass, seeing me sitting on the floor in the corridor trying to send an email!
We had many laughs hosting a table tonight, with a family from Ohio. The fellow is an engineer, who prides himself on not needing friends, and does much work with NASA. He feels the heat, like I do. We all find the lecture theatre onboard very warm, airless and soporific. I open the doors leading to the life boats for 10 minutes before a lecture, to cool the theatre down and let in some fresh air. Paul nearly split his sides when I suggested that since he looks like a bouncer, and doesn’t need any friends, he could be on door duty and stop anyone closing them?! We are going to get on just fine keeping the theatre cool and fresh in future.
Gold Harbour and Cooper Bay beckon ever so seductively in the morning, on South Georgia.

26 December Gold Harbour and Cooper Bay South GeorgiaSouth Georgia is undoubtedly the most spectacular and mountainous of all the Sub Antarctic islands. Glaciers cover 60% of the island, and peaks towering 2900meters/9515 feet ASL. First discovered probably by de la Roche’ in 1675, and named Roche Island. See note below about Cook a century later in 1775. Dominated by whaling stations from 1904 to 1965, a practice which saw 175 000 whales slaughtered, along with huge numbers of seals between 1786 and 1913. Historically best known for being the starting point for Shackleton’s 1914 Endurance Expedition, and place he sailed to in a lifeboat in May 1916, seeking desperate assistance for 22 men left on Elephant Island. Shackleton then died on South Georgia on 5 January 1922, during the Quest Expedition, and is buried in the Grytviken cemetery. I recommend to ALL guests considering travelling to Antarctica, that they choose an itinerary which includes South Georgia. It is a sensory overload, on many levels.

It was Siegfried Sassoon, I believe who suggested measuring Life not by how many breaths you take, but rather by how many times Life takes your breath away. After a 3-day crossing from Ushuaia, today in South Georgia was one of those days.
Gold Harbour lay before us, basked in rare sunshine highlighting thousands of King Penguins, and hundreds of Elephant Seals. Guests could be heard exclaiming in their awe as they approached on the Zodiacs. Most simply alighted the Zodiacs, and stood jaws agape at Nature’s bounty stretched out before them as far as the eye could see. Elephant Seals are massive creatures – the large bulls (Beachmasters) growing to 4500kg. There were no big bulls on the beach, but plenty of young males, females and weaners (pups). The pups with their huge brown eyes and curiosity are probably some of the cutest animals imaginable. Young males jousted, raising themselves up and lunging at one anothers’ faces and necks. Many were throwing sand over their backs as a barrier against the sun, as Elephants do. Guests walked along the level beach, entranced at the mountains, glaciers (Bertrab Glacier prominent) and wildlife about them. King Penguins were everywhere, in their beautiful breeding plumage-bright orange neck patches. They walk in groups, looking like so many old men on their way to lunch in suits with tails. Giant Petrels and Skuas frequenting the breeding Penguin colony, stealing eggs and chicks at every opportunity. Nobody wished to leave the shore. I told every guest I assisted back into the Zodiacs to bottle the experience of Gold Harbour we had today, and cherish it for Life. Today was seminal.
The Harbour takes its name from Filchner’s German Expedition who in 1911, found iron pyrites or “fool’s gold” in the rocks here.

Lunch was enjoyed onboard whilst Le Lyrial re-positioned to Cooper Bay for a Zodiac tour in the afternoon. Four different types of Penguins were seen from the Zodiacs – King, Gentoo, Chinstrap and Macaroni with their prominent yellow headdresses. Elephant Seals and Antarctic Fur Seals lay on all the beaches. One Zodiac watched a Leopard Seal drown and consume a young Elephant Seal pup, which upset most of the female observers. Wandering and Light-mantled Sooty Albatrosses delighted the birdwatchers. Cooper Bay is named after Lt Robert Cooper onboard James Cook’s HMS Resolution chartering this coastline in 1775. Cook claimed sovereignty of South Georgia for Great Britain that year.
Tomorrow we visit Grytviken (including Shackleton and Wilds’ graves), and Fortuna Bay – this incredible voyage has begun most beguilingly.