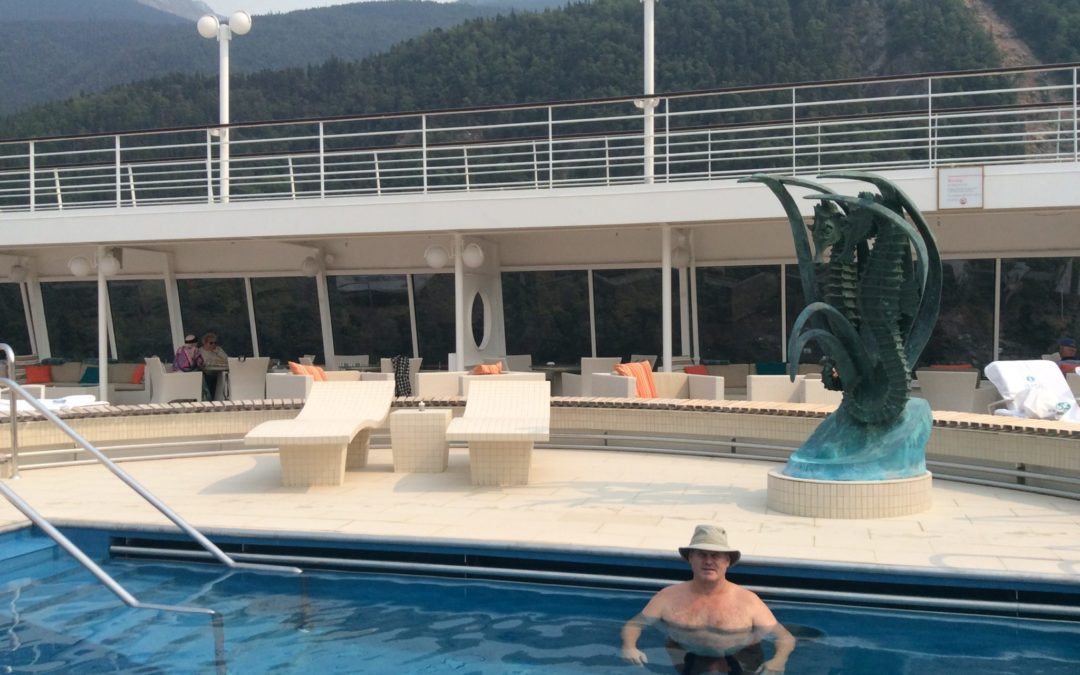 Our lives were proceeding swimmingly in 2019, until Sunday 5 May.
I shared those momentous changes in my last blog, including cancellation of the UK lecture tour at the 11th hour. Fate has smiled upon us, and we find ourselves cruising the Alaskan panhandle onboard Crystal Symphony. Despite my still being on crutches, Life goes on.

A friend in England, Mark Jones, said there was something ironic about a one-legged man on a ship. Had I thought about an eye patch and parrot? He was warned about taking the gangplank till his hat floats…
I was asked to make some commentary from the Bridge in Endicott Arm. I picked up the microphone and began speaking about Canadian confederation in 1867, Seaward’s folly purchase of Alaska from Russia in 1867 for $7.2 million, then Canadian desire to include the panhandle in their territory providing access to the Klondike gold fields. It is a complex story, only formally resolved in 1903, but Anglo-American sentiment prevailed, and Alaska retained this unique panhandle of South-Eastern Alaska. Over my shoulder I noticed the Cruise Director wanting to stop me, but I was mid-flow, and kept going. Turns out my commentary was overwhelming the Bridge, the officers could not hear one another or the Ice Pilot guiding us through icebergs approaching Dawes Glacier. I had to modulate my voice practically to a whisper and proceeded. Clearly the bike accident has not affected my voice.

I continue diligently doing my physio exercises, walking the deck pushing a wheelchair and exercising in the pool. Pete Wenham was rude enough to comment “Baywatch in a Tilley”, as I don’t spend time in the sun sans my hat! Trying to get off the crutches is proving very challenging indeed – confidence, strength and balance just not there yet. Today, I hobbled without crutches around the cabin, and feel it is a major breakthrough. Just dying to be able to walk off the ship and enjoy these incredible places we are visiting.
There are a large number of cruise ships in the panhandle, confirming the magic of this destination at this time of year. Sadly, very little snow around, as Alaska basks in a heatwave. We enjoyed dinner with a US Congressman of 26 years experience. Getting his insights into 5 different Presidents he has served, along with the age profile of Trump, Biden and Sanders was enlightening indeed. We also found the background of previous Presidents most interesting, and JFK’s election at age 42.

Cruising on this magnificent vessel, handicapped as I am, provides plenty of reason never to take Cruising in Life for granted, never.