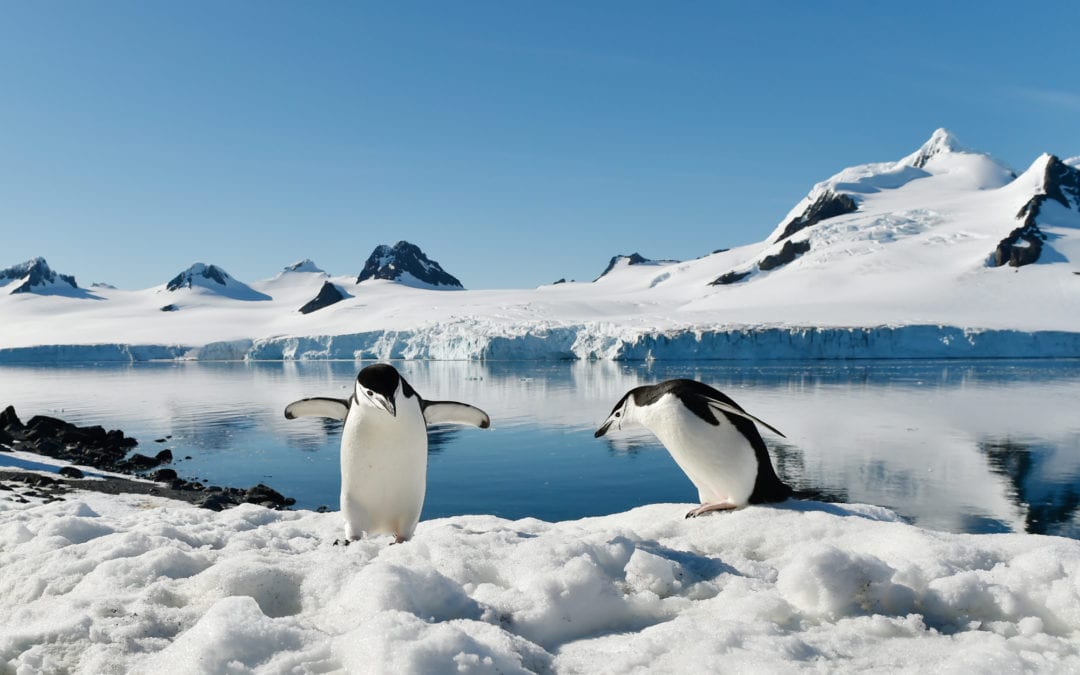 Last evening we enjoyed another wonderful meal in Tastes, before watching Hotel Rwanda on DVD. A most depressing story regarding the Rwandan genocide. By the time we turned in, it was snowing steadily outside, creating a quite surreal scene just off our balcony. It was another very calm night at sea, thankfully.
The Dawn found our vessel in thick fog and very low cloud – a fine reminder of just how fortunate we had been yesterday, with incredible sunshine especially in the Neumayer Channel. The morning was filled with whale watching, and lectures by Tony Leon (Mandela and de Klerk) and General Michael Rose on the Falklands War, in which he played a crucial part. I provided some commentary over the PA system on the South Shetland Islands. We sat with Tony and Michal Leon at lunch, sharing many humorous stories about the speaking scene on ships, the new Argentina, Laurens van der Post, and other interesting subjects. Interesting to note the THE single most important aspect upon which these cruises are rated is the food. On Crystal the food is exquisite.

Robert Schrire then spoke about China, and would she be the next world superpower. Whales and dolphins have created much excitement about the ship, along with penguins on Deception Island. We sailed right past Neptune’s Bellows, the entrance into Deception Island – a collapsed volcanic caldera. The narrow entrance requires a small ship and very skilful navigation. Serenity unfortunately too large to qualify. Being on board a ship of this magnificent class, as guests of Crystal, is a very special privilege indeed.
During the afternoon, the Captain very graciously took the ship into Admiralty Bay on King Edward Island. Significantly, the only airstrip in the region is situated here, maintained by the Chileans. In days gone by the bay was popular with whalers and sealers given the good average depth, and the T-shape of the inlet offering protected anchorage and protection from storms, ice and wind. As a result, along with easy resupply by aircraft there are no fewer than 12 bases around Admiralty and Maxwell Bays. We see Chinese and Chilean ships resupplying their bases, but the numerous glaciers are the stars of the afternoon.

Glaciers plunge into the ocean from all sides, providing a visual feast few places can match in light like we enjoyed this afternoon. The fog had moved southwards, and by 4pm glorious conditions was again surrounded Serenity. A lifeboat was launched with cameramen and videographers on board to shoot our vessel in this emblematic Antarctic environment. If any bonus was required, a large, relaxed Leopard Seal lounged on an ice floe right next to the ship. It is wonderful to see the guests out on the decks overwhelmed by the bounty Nature is providing us.
There are quite a few guests on board who have been on previous cruises where I have spoken; all enquiring about my lack of stick – shorts no longer worthy of a comment. Nice to be remembered for something.