Cruising back to Ushuaia 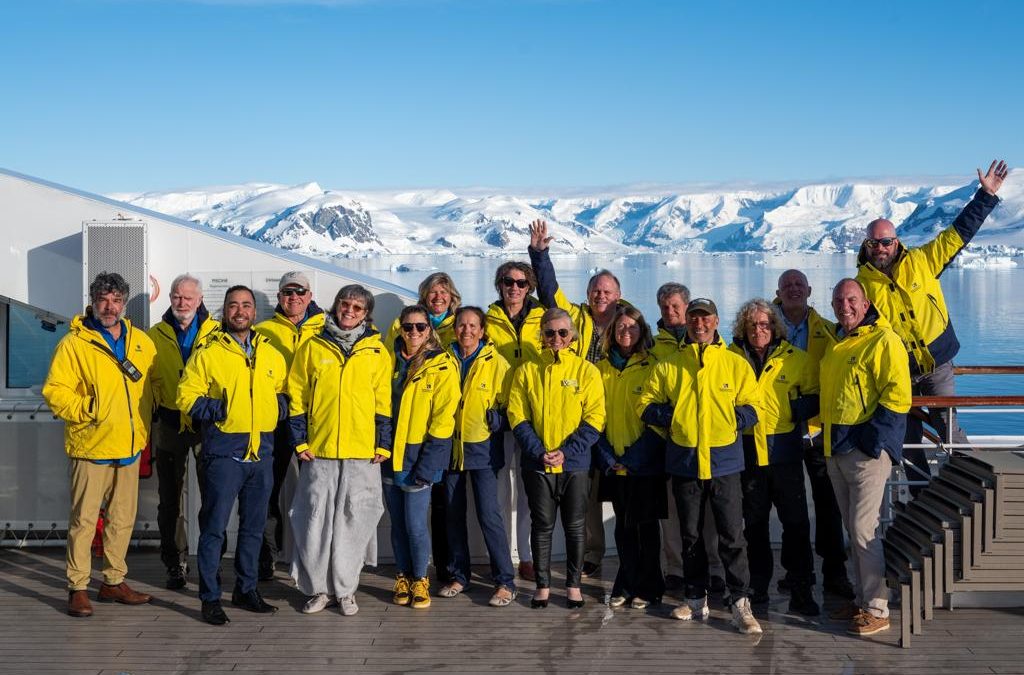 ” ..As though we were truly at the world’s end, and were bursting in on the birthplace of the clouds and the nesting home of the four winds…” These lines are usually associated with Shackleton referring to rough seas in the Drake Passage. We are experiencing calm seas in the Drake Passage, fortunately. Close scrutiny probably indicates that these beautiful lines were first penned by Canadian poet Robert Service. Magnificent prose, nonetheless.

Today the reality struck us all – this exquisite adventure is almost over. The Expedition Team received all the boots and waterproof trousers, the deck hands collected the life jackets. We are heading back to Ushuaia and will be there late tomorrow evening, after rebunkering fuel at Port Williams in Chile. Fuel is cheaper in Chile than Argentina. Marco and Patri presented their powerful lecture on Seabird Conservation in Fisheries. The by-catch associated with fisheries, particularly longline fishing, is detrimental to seabirds the world over. Marco and Patri outlined various measures being undertaken to mitigate against these unnecessary losses which impact heavily on long lived birds like albatrosses. This project enjoys funding from A&K Philanthropy, amongst many other donors.
Some guests who are aware of my work in South Africa, requested that I do a lecture on the Anglo-Zulu War. I explained the background to the unfortunate outbreak of hostilities in January 1879, and then discussed the Battle of Isandlwana in some detail. Some guests wished to know about the loss of Louis Jean Joseph Napoleon (effectively Napoleon IV) at the hand of the Zulus in an ambush situation on 1 June 1879. An unusual lecture to be shared in the Drake Passage. Lecture and questions ran to 70 minutes, on a 45 minute schedule usually.

The Drake Passage is a deep waterway 600 miles (1000km) wide separating Tierra del Fuego (Patagonia) from the Antarctic Peninsula. It defines the zone of climatic transition between the cool, humid, subpolar conditions of Patagonia and the frigid, polar regions of Antarctica. First traversed by Belgian Willem Schouten in 1616, it bears the name of famous English global circumnavigator Sir Francis Drake. The Drake Passage played an important role in trade of 19th and early 20th centuries, before the opening of the Panama Canal in 1914. The stormy seas and icy conditions made the rounding of Cape Horn through the Drake a rigorous test for ships and crews alike, especially for sailing vessels of the day. The average depth is 11 000 feet (3400 meters). Water within the Drake Passage  flows predominantly from west to east and forms part of Antarctica’s Circumpolar Current, the largest current in the world. The compression/funneling of wind and current between South America and Antarctica creates the wildest ocean crossing on Earth, to be treated with respect, but largely enjoys an exaggerated reputation. This trip where we travelled to the Falklands first, South Georgia and then Antarctica requires that we only cross the Drake directly once, and so far it has been benign. I spun in the gym this afternoon, and up there the movement of the ship feels less benign, to be fair. Many guests and Team members are sea-sick, unfortunately.

Tonight the Captain introduced many of his crew to the guests, before a fine Gala Dinner in Le Celeste restaurant on deck 2. Most were dressed formally, including all crew and the Expedition Team. After dinner drinks were enjoyed on deck 3, with music/singing provided by Anna Shut, whilst classical pianist Uliana Chubun entertained those in the Observatory Lounge on Deck 6.

An extremely rare evening for me not to be hosting guests, so I retired to my cabin early, penned this blog and look forward to reading until sleeps overwhelms me. It has been a fairly demanding trip, but wonderful in every respect. Altogether a great day onboard – relatively calm seas, and time to reflect on another journey of a lifetime…

Since this is the Christmas family cruise, there are many youngsters onboard. With boundless energy they were joined by not-so-young guests last night in some late night celebrating. As a result the ship was quiet this morning, with many lying in after a fairly rolling night onboard Le Lyrial. Englishman Russ Manning gave a lively presentation on Life at a British Antarctic Station. Russ himself commanded Signy Station, and spent two winters there, back to back. In a male dominated enterprise there was huge cudos associated with staying for two winters, back to back – 22 months in total. Russ’ Antarctic experience over 35 years beggars belief, from belaying into mighty crevasses, to Zodiac exploration and rescue missions. His unbrushed, wavy blonde hair is unmistakable, as is his tendency NEVER to wear a hat or beanie in Antarctica.

Since the ships plying these waters are fairly homogeneous, guests anticipating a trip to Antarctica should base their decision entirely upon the quality of the Expedition Team. Rather like a ranger in a game-viewing vehicle in Africa making all the difference to your safari experience, so too the Expedition Team craft your experience in Antarctica. This A&K Team have 391 combined Antarctic years experience between them, and it certainly enriches the guests’ experience exponentially.
Paul Carter detailed the disembarkation procedures for tomorrow. All guests sad that this magical experience together is drawing to a close. I shared stories of Harry Wolhuter killing a lion which had attacked him, with a sheath knife, and George Buntting of Anglo-Zulu War fame, with the Young Explorers. They know me well enough now, that there is much teasing with these delightful youngsters.

The DVD presentation “Around Cape Horn” was shown after lunch. In 1929, the massive bark Peking rounds Cape Horn in a violent storm. Captain Irving Johnson was onboard, and narrates the passage in an inimitable style which made him famous on the world lecture circuit. Some young sailors were washed overboard, and remarkably rescued by the Captain hanging off the back of the ship on a net, literally plucking the unfortunate souls from certain death.
Reading the daily program this morning, I got an awful shock to note that I was due to lecture at 5pm. This brings my total number of lectures on this trip to 6, whilst all other speakers have done 3. Much of the day was spent preparing same, and I spoke at 5pm about the psychology of survivors, highlighting Jean-Baptiste Charcot and Otto Nordenskjold. Frenchman Charcot made two expeditions into the Antarctic Peninsula, and on both occasions hit rocks damaging the ships extensively. He got all of his men and ships back to safety. Sweden’s Nordenskjold created a story of survival from 1901-3 which deserves a far greater audience and respect. Geologist Dany Martinioni joined me on stage (in shorts) to assist with questions regarding geological samples, dinosaur discoveries and the like, which he is well familiar with. Guests commented on my assistant matching my dress!

At our final Recaps session we watched a beautiful slide/video show of our trip, created by Naturalist JD Massyn. The winners of the charts for the Crew Welfare Fund, and Association for the Conservation of Albatrosses and Penguins were announced.
During the evening Le Lyrial rebunkered fuel at Puerto Williams in Chile, on southern side of Beagle Channel, before progressing steadily to Ushuaia for tomorrow’s morning disembarkation. Tomorrow will be a chaotic turnaround day between Voyages 2&3, which includes Covid testing.