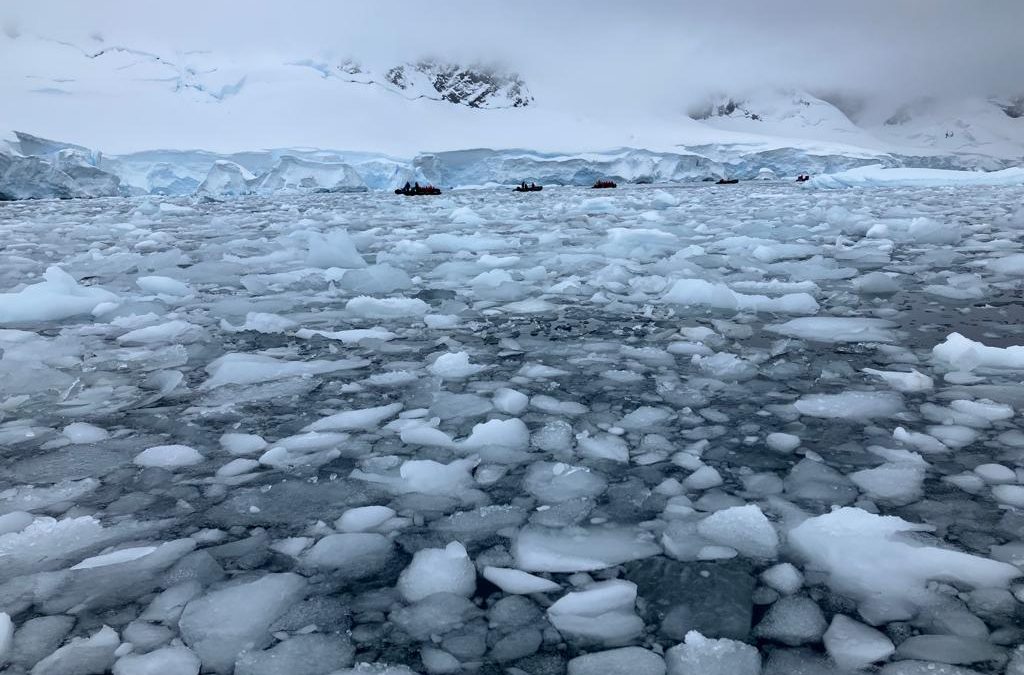 “Polar exploration is at once the cleanest and most isolated way of having a bad time that has been devised”- Apsley Cherry-Garrard. Cherry as he was best known to his friends, walked 60 miles across Ross Island to Cape Crozier in the dark of Antarctic winter, to collect Emperor Penguin eggs. Accompanied by Edward Wilson and Henry ‘Birdie’ Bowers. Out of this journey emerged The Worst Journey in the World, probably the finest book ever written about Antarctic exploration.

In fine conditions, we visited Paradise Bay this morning, and the Argentine station, Brown (no longer in operation). Guests were given the option to hike up the hill behind the station, and slide part of the way back. The views from the elevated position were wonderful over surrounding mountains, glaciers and ice fields. We put old towels down to facilitate movement over the snow and ice. Many guests overestimate their abilities, and we spent much time helping people to and from the station (30 meters) before they acknowledged it was beyond them to go any further. Snowy Sheathbills nesting below the stairs provided the birders with much interest. En route back to Le Lyrial, the guests were taken on a Zodiac tour of the bay, including viewing nesting Blue-eyed Cormorants up close.

Over lunchtime, the ship repositioned to Hidden bay, just east of Rennard Bay on the Danco Coast. So named by de Gerlache’s Belgica expedition, as the bay is hidden by the Screen Islands (original naming). A Zodiac tour was enjoyed by A&K guests between numerous icebergs, brash ice and bergy bits. Drivers explaining the various ice terminology, formation of glaciers, tabular icebergs and how escaping air erodes vertical lines along the sides of icebergs. Hidden Bay sits virtually at the northern entrance to the Lemaire Channel, one of the most photographed areas of Antarctica. First discovered by German Dalmann’s expedition in 1873/4, it was named by de Gerlache for Belgian/German explorer of the Congo, Charles Lemaire. Lemaire was initially a photographer, but became a swashbuckling explorer, with large, handlebar moustache. Kodak Gap, Kodachrome Canyon and Fuji Fjord are commonly used to refer to this exquisite channel, 7 miles long and 1 mile wide. Low cloud prevented our enjoying the place in all its visual glory, but a gorgeous waterway between towering peaks. Whales provided much enjoyment to the guests, all about the ship. No Recaps took place this evening on account of the Lemaire transit, during which the Observation Lounge on deck 6 was filled to capacity.

De Gerlache was forced to sell his ship Polaris (built in Sandefjord, Norway in 1912) to Shackleton in January 1914, due to financial pressures for 11 600 Pounds Sterling. Shackleton’s family motto was “Through Endurance we Conquer” and consequently changed the ship’s name to the ill-fated Endurance. I cannot help comparing de Gerlache with Shackleton in certain respects – unconventional, well-connected, persuasive, dreamers, get-rich-quick schemers and probably years ahead of their peers. This history’s interconnectedness beggars belief.

Of the 6 species of Seals living in the Antarctica, one is “eared” and the other five are true Seals. With small external ear flaps the Antarctic Fur Seal has a hinged pelvis, moves rapidly like a dog, and uses fore flippers to swim. On land they move on fore and hind flippers, capable of outrunning most people. Males can weigh 200kg, almost 4 times the weight of the females. Crabeater Seals are considered to be the most abundant, with estimates between 10 and 50 million animals, largely Krill feeders. Often heavily scarred from Leopard Seal attacks. Leopard Seals have leopard spots on their elongated bodies, powerful fore flippers with a large serpentine head and menacing 150 degree gape. Females are larger than the males, measuring up to 4,5 meters and weighing 600kg. Eating a widely varied diet including other Seals, penguins but largely Krill. We hope very much to see the elusive Leopard Seals in Cierva Cove in the morning. Weddell Seals are the most southerly occurring seal in the world, with their “cat-like faces”. They use canine and incisor teeth to keep breathing holes open in the ice, often suffering impacted teeth in advanced age. Southern Elephant Seals are the largest Seals in the world, males weighing over 4 tons (second only in size to Elephants as land mammals). These mammals can dive to 1700 meters, and remain submerged for 2 hours. Little is known about the Ross Seal, a species confined to the heavy pack ice. Along with Weddell, Ross Seals are known for their singing.

After dinner a beautiful piano recital was presented by classical pianist Uliana Chubun in the Theatre.

Primavera at Cierva Cove and Mikkelsen Harbour ~ 18th December 2022 Roald Amundsen who always acknowledged other Polar explorers once wrote “We must always remember with gratitude and admiration the first sailors who steered their vessels through storms and mists, and increased our knowledge of the lands of ice in the South”. Amundsen read their accounts voraciously, and along with his own experiences in Norway, became the finest Polar explorer of them all.

This morning, under low clouds and brooding sky, we arrived in Cierva Cove. Named after Spanish designer of the autogiro, the first successful rotating wing aircraft in 1923, Juan de la Cierva. In cold conditions with greasy ice forming on the surface, we cruised the bay in Zodiacs. Plenty of Humpback Whales feeding provided enormous entertainment, and pleasure. Good views of their enormous pectoral fins were had – remember the same size as the stabilisers on the 11 000 ton Le Lyrial! We looked at Chinstrap Penguins who make their way up tortuous slopes for the prime nesting spots on the high, drier ground. The abundant green lichen gives the Argentine station its name of Primavera (Green). This area is well known for its Leopard Seal population, but rather like Leopards in the African bush, there were none to be seen today. Abundant glaciers run into Cierva Cove, providing huge numbers of large icebergs, and plenty of bergy bits. As is the old A&K tradition, the guests enjoyed a glass of champagne in the Zodiacs, as a toast to this exquisite place Antarctica. I toasted Antarctica with a reference to Browning’s words on Shackleton’s grave, and striving to the uttermost for our Life’s set prize. I hope that Antarctica is part of our guests’ Life set prize, and that this trip has exceeded expectations. The drivers had a glass of orange juice. None of the guests can believe this is their last day in Antarctica – tonight we begin our journey back to Ushuaia.