Changing weather at the bottom of the world 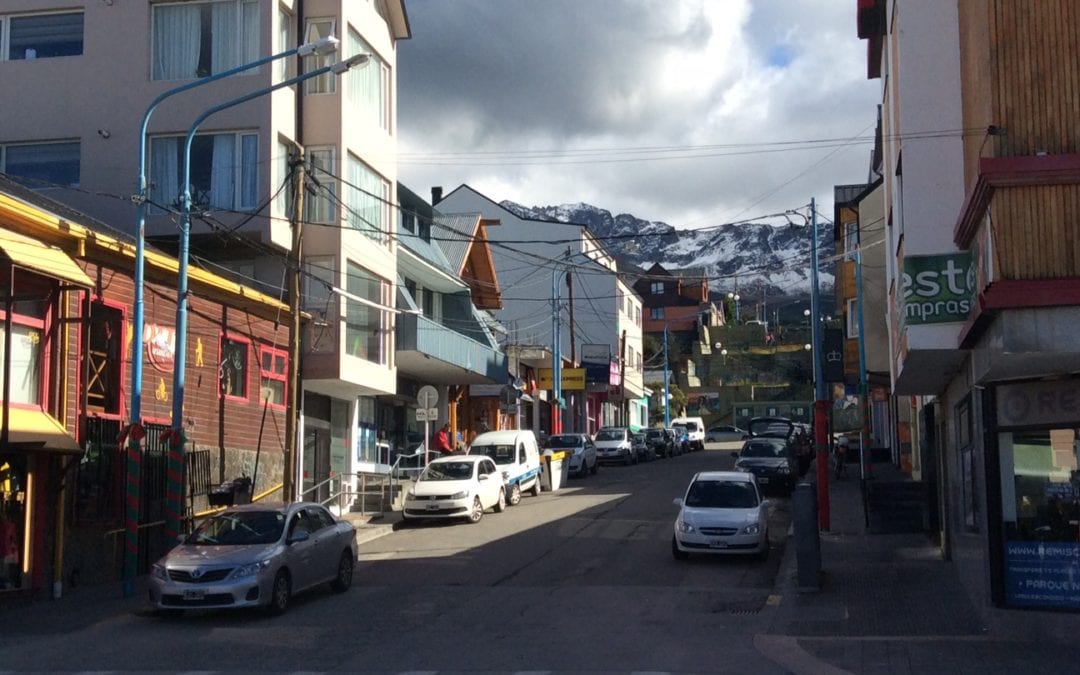 After two glorious days in Ushuaia, today the wind was strong enough to tilt ships at the quayside. Town was a buzz with many guests and staff off ships. Admittedly everything done here has to come an awfully long way, but the general prices of goods is very high. An Australian from Sydney, on the flight from Buenos Aires, mentioned that despite Sydney being considered a very expensive city, globalisation of prices has seen prices escalate considerably the world over.

I took time to stroll along the waterfront, enjoying the abundant birdlife despite the wind, including a family of ducks. Three tiny ducklings swimming adeptly in very rough water. The pier was busy with three cruise vessels being re-supplied. Coffees shops full of guests delighted to have fast, free Internet connections – WiFi on board these ships tends to be slow and fiendishly expensive.

One unfortunate motorist lost control of his vehicle last evening, and veered off the gravel road. Unfortunately his course was blocked by a massive rock, and damage to his sedan was extensive. Cars, like everything else, are very expensive hereabouts, and the vehicle was hastily recovered. The driver no doubt hoping the damage was not as severe as he feared. Many vehicles are missing parts of their fronts, probably removed by deep snow in the winter months? Many small cars have dented rims, no doubt on account of numerous potholes – this is not an easy environment for motor vehicles. I noticed a number of adventure motorcycles, reminding me of Ted Simon’s Jupiter’s Travels, and a Columbian self-taught geologist I met on board Le Lyrial who took a 3-year bike trip right around South America.

The recent snow fall in Britain has delayed some of our team’s arrival, but they are due in tomorrow. A long walk in the hills above Ushuaia this afternoon rounding off a wonderful day on this frontier. Never having had the luxury of a day or two to acclimatise and get over jet lag previously, this is a wonderful, much appreciated pre-amble to what promises to be two very busy cruises for me, at least – four for most of the team.