At sea heading towards Elephant Island 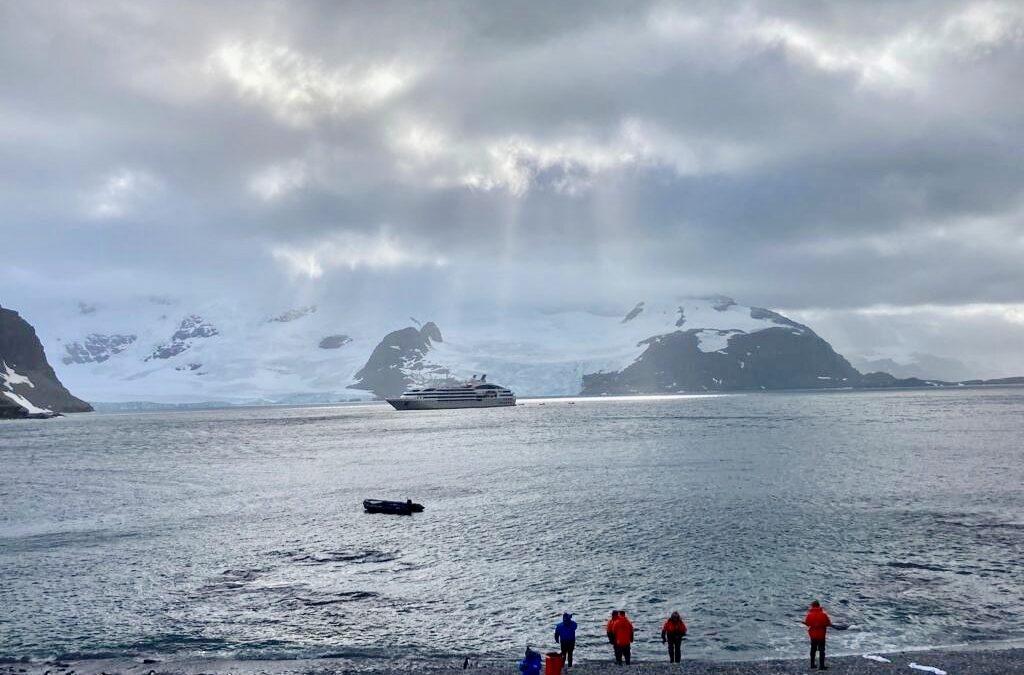 “At a time when it is possible for 30 people to stand on top of Everest in one day, Antarctica still remains a remote, lonely and desolate place. A place where it is possible to see the splendours and immensities of the natural world at its most dramatic and, what’s more, witness them almost exactly as they were, long, long before human beings ever arrived on the surface of this planet. Long may it remain so “. Sir David Attenborough.
Today we woke early (3am) in preparation for the total solar eclipse expected at 4.08am. Coffee, pastries, cereals, etc were available on Deck 6, before all guests and staff gathered on the rear outdoor decks. Ship crew gathered on Deck 4 and were clearly in great spirits. For the privileged few (around 3000) viewing this eclipse, only visible over the Southern Ocean and Antarctica, it was an incredible experience. Cloud cover sadly precluded our seeing the sun itself, but at exactly 4.08am the sky darkened very quickly. For a full minute it was black as night, before rapidly becoming light again. Some nations around the world view eclipses negatively/superstitiously, whilst others see them as natural wonders, to be viewed positively. For most, it was a significant moment to be standing on deck and part of this extraordinary cosmic event.

Astronaut Susan presented a wonderful series of images, showing initially changes on Earth viewed from above. Changes in lake levels, river systems, deserts and forests over the past 16 years are staggering. Theewaterskloof Dam, the principle reservoir for Cape Town in South Africa featured prominently at the height of the 2018 drought, when Susan visited that country. Circles of irrigated agriculture, under centre pivot irrigation in Saudi Arabia, fed by borehole water from beneath the desert surface are deeply concerning, as is Chernobyl and plans to dredge the rivers there. Susan went on to host a quiz requiring guests to guess what she was showing them by way of photographs from her own space mission, or the International Space Station. It was great fun-places like Cairo (including pyramids), Pearl Harbour, Hawaii, Cuba, Mexico City, Panama Canal, Gulf of Aqaba, London and Washington looking very different from this perspective. Water Hyacinth blooms in Lake Victoria hugely challenging, as are the algae blooms in the Great Lakes. Her conclusion was massively impactful – Earth is a space ship, we are the astronauts, with a single point for failure only….

By lunchtime the ocean was showing some of her might. Our 12 000 ton ship is being moved around considerably by the waves, at times 8 metres high, and winds gusting at 50 knots (80km/hr). Lunch was served only on Deck 2, and the Dining Room was sparcely populated by guests, many clearly choosing to remain in their cabins.
As I have mentioned before that these ships have small shower rooms and toilets. Certainly the toilet in not a space in which to swing a cat. Karen pleads with me often not to have my cabin resembling a Chinese laundry, but we got wet enough on the landing at Shingle Cove yesterday, that there is no other option by which to dry one’s clothing. Parkas, boots and waterproof trousers are placed in the corridors, where there tends to be a strong movement of air, and items dry quickly.

At mid-afternoon photo coach Michelle did a wonderful presentation about using our cameras off Automatic mode. Perhaps the excitement of this morning’s eclipse, along with the ocean conditions have gotten to astronomer Massimo, and he is sadly feeling poorly. With usual A&K panache, they have moved lectures around, and I gave an entertaining presentation about Shackleton at 5pm. Shackleton’s misadventure onboard the Endurance in 1915/16 rates as one of the greatest survival stories of the modern age. Their ship was beset in pack ice in January 1915 in the Weddell Sea. The ice eventually destroyed and sank the vessel in November 1915, leaving 28 men and 57 dogs floating on the sea ice. Over the following 6 months they make their way to Elephant Island, and Shackleton eventually sails a lifeboat with 5 companions to request help from the whalers at South Georgia.
A true epic of human struggle, and triumph of the human spirit. All told this story runs from October 1914 to September 1916, two full years!