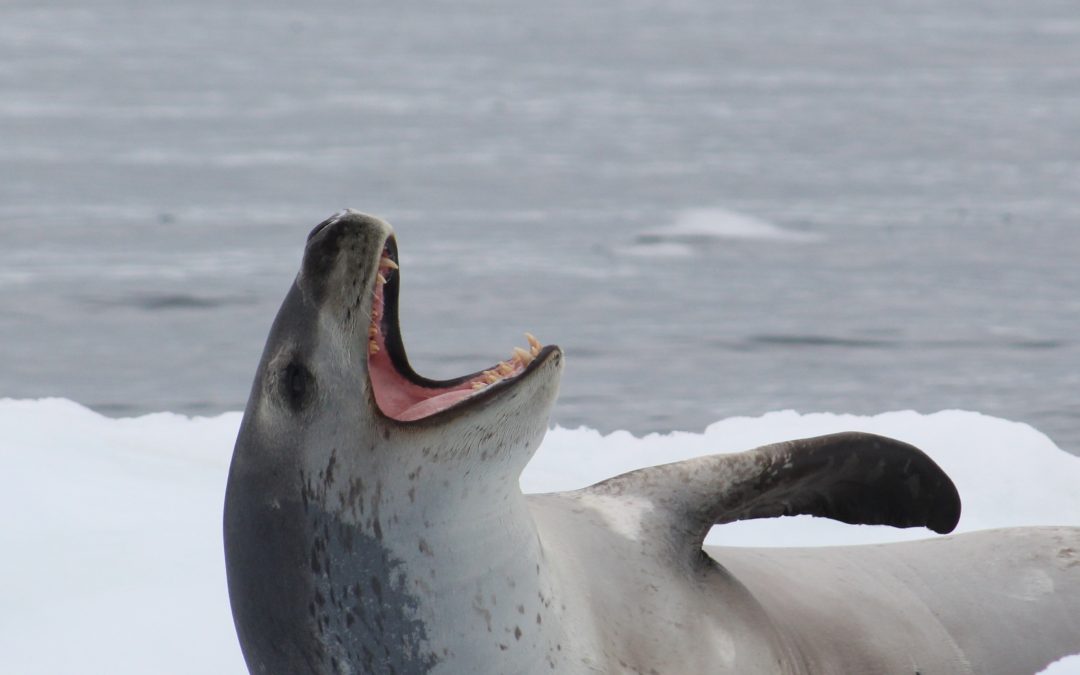 Early this morning, we anchored in the South Shetland Islands, for our first Antarctic landing. Excitement levels were very high indeed, regarding visiting Penguin Island, and walking up Deacon Peak (volcanic caldera) which is 170m/560 feet in elevation. A scouting Zodiac left Le Lyrial at 6.20am, and sadly found the wind along with much brash ice along the shoreline would make the operation impossible. In double quick time, Marco, Suzana and the Captain moved to Plan A – travel 3 hours southward to Fort Point at the south-east extremity of Greenwich Island. Hopefully the landing site would enjoy shelter from the north/north-westerly wind blowing. Indeed Marco’s intimate knowledge proved correct, and we began landing on Fort Point around 11am. Exposed rocky crags contrasted beautifully with massive ice fields and glaciers. It was a dream replacement in every sense for Penguin Island. Nesting Chinstrap and Gentoo Penguins provided much interest, along with breath-taking scenery in all directions. Swell around the ship was impressive; the Zodiac drivers and deck hands did a wonderful job of loading and unloading guests from the Zodiacs.

Le Lyrial repositioned to Deception Island, one of only two active volcanoes in Antarctica. The other being Mount Erebus on the Ross Sea quarter. The island looks deceptively like any other island hereabouts, but a very narrow entrance called Neptune’s Bellows allows ships into this water-filled caldera. Initially a sheltered anchorage used by sealers, then whalers until 1931. In 1944 Operation Tabarin established bases within Whaler’s Bay, and soon came aircraft and a large hangar. All activities ceased in 1969 after a violent volcanic eruption, which destroyed bases, swept away the cemetery and considerably altered the landscape with a 4-6 foot layer of ash and cinder. Initially guests enjoyed a ship cruise around Port Foster. Ice and snow covered by ash and oxidised material provided unique photographic opportunities, as did the old whaling station remains.

The Team who weren’t driving were out on deck, my shorts attracting much attention as it was rather cold. A Zodiac tour was then offered, which many guests enjoyed around Whaler’s Bay, before returning to our beautiful ship for a late dinner. Indeed a magnificent day as we begin to enter the Great White Southern Continent.

This morning a Zodiac tour was planned in Wilhelmina Bay, named after the Queen of the Netherlands by de Gerlache. Whales are often seen here, giving it the name ” Whalemina Bay”. In cold temperatures (2C/34F), we set out in front of the Leonardo Glacier with lofty snow-capped mountain peaks and glaciers plunging into the sea. Our Zodiac was fortunate enough to have an adult Minke Whale swim underneath the craft a number of times, and surface looking closely at us. The pale lower jaw plainly visible. In A&K’s special style a box was produced holding champagne flukes, champagne and orange juice. A toast was enjoyed on each Zodiac to this White Continent and unforgettable experience together.
The southernmost BBQ in the world was held at lunchtime, with guests enjoying a wonderful meal in two waves – Endurance and Discovery, so the deck 6 restaurant could accommodate them all. The group not at lunch enjoyed “On thin Ice” narrated by David Attenborough, emphasising how climate change is affecting the Polar regions.
During the afternoon, we landed on Cuverville Island, at the northern end of the Errera Channel. The earlier snow level has melted considerably, leaving the surface fairly rocky, with a huge amount of organic matter (read guano) producing the famous eau de Penguin.

Humpback Whales cruised calmly in the bay amongst abundant icebergs. Guests were offered a Zodiac tour en route back to the ship, and were delighted to see a Leopard Seal very close-up. Before Recaps a massive tabular iceberg, with a very symmetrical arch in it provided much interest, and option for pictures. During Recaps I spoke about Operation Tabarin (1943-1946), named after a famous Paris nightclub. Essentially a secret operation to establish permanently manned bases down here, on behalf of Britain to deter Germany during the war, and Argentina and Chile who had conflicting territorial claims in the region. The British government hoped to fund the operation via the sale of special edition stamps and first day covers. Unfortunately this compromised the secrecy of the operation, and Admiralty footed the bill ultimately. Immediately after Recaps a pod of Orcas was observed close to Le Lyrial, always a special treat in these waters. During dinner, we moved into Dallman Bay, between Brabant and Anvers Islands. A group of Humpback Whales involved in lunge-feeding very close to our ship created massive excitement amongst the guests.
I enjoyed dinner with 4 guests – 2 American and 2 British. The American sailed across the Pacific in 1977 in his own 40 foot yacht, using celestial navigation only. I borrowed sight reduction tables, a naval almanac and star dome chart from the Bridge, and we had a fascinating time together, learning about the intricate process of navigation with a sextant. It was riveting. This indeed is the Antarctica we signed up for, and every guest had their breath taken away today.