Across the Scotia Sea 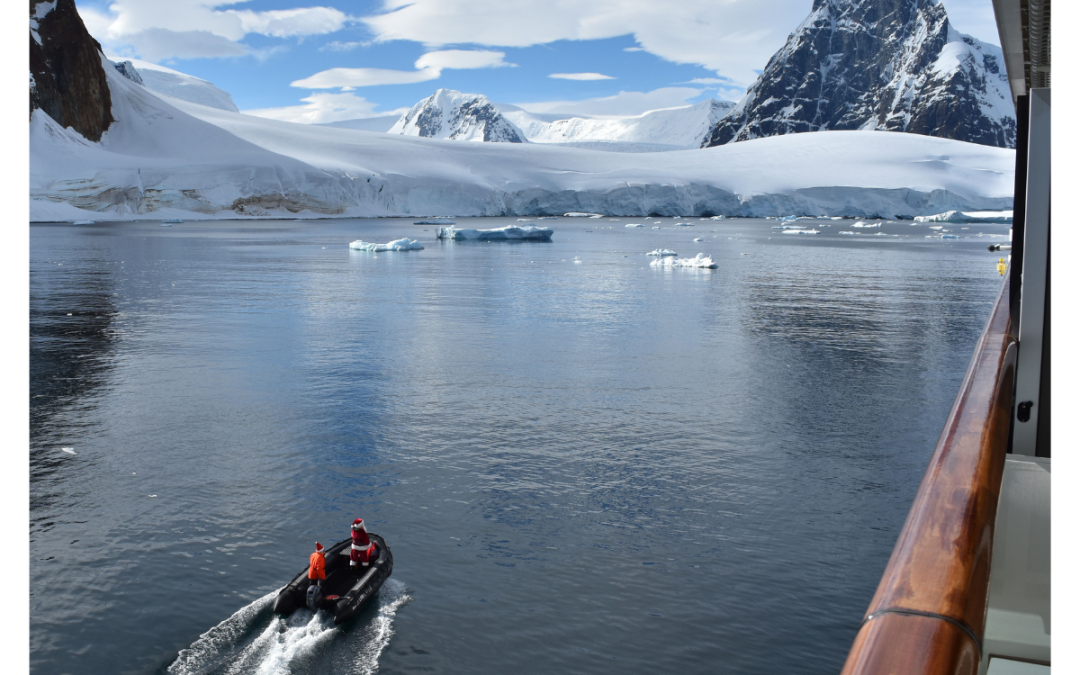 A guest suggested Christmas Eve is a perfect night to express affection for your family, to forgive those who failed you and to forget past mistakes. Thoughts worth sharing. Lockdown reminded us strongly that we all need someone to love, something to do, and something to look forward to? In our case, a home!

Last evening we moved our clocks an hour ahead, and most guests had a relaxed, later start to the morning as we calmly proceed across the Scotia Sea towards Shag Rocks, and South Georgia. At 9.30am Marine Mammals Lecturer Luciana Motta who hails from Argentina presented Seals and Sea Lions of the Southern Ocean. A beautifully illustrated talk, explaining the differences between the species, breeding habits including delayed implantation, the reliance on krill and warning guests about the mobility of Antarctic Fur Seals on land. Luciana told us how exceptionally cute we are all going to find the Elephant Seal pups/weaners on South Georgia.

Expedition Director Suzana Machado D’Óliveira explained the procedures for safe use of the Zodiacs, embarkation/disembarkation, etc. Expedition Leader Marco Favero then showed a short film narrated by David Attenborough regarding our visit to South Georgia, how sensitive the environment is, and what we need to be acutely mindful of. To this end we shall be doing a biosecurity inspection and cleaning of all outer layers, boots, tripods and backpacks this afternoon. Upon departure from the Theatre the Expedition Team handed out life jackets, which guests will use for all Zodiac operations.

As we are travelling to South Georgia, so prominent in Shackleton’s Endurance Expedition, Distinguished Professor Steven Austad from Birmingham, Alabama and an expert on human longevity, offered to look into the life spans of Shackleton’s men after the Endurance expedition. The results below are compelling and fascinating :

“Recall, I was going to do an analysis of the longevity of Shackleton’s Endurance crew relative to the life expectancy of the time.  I’ve now done that and the surprising (to me) result is that the crew as a whole lived considerably longer — 8 years longer than other men of the time.  Shackleton himself was clearly an exception (living 18 years less than expected).  As you no doubt know, there has been speculation that he had a congenital heart problem. Two possible explanations come to mind.  1. These men were hardier than their average contemporaries. This wouldn’t be surprising given that they had all volunteered for such an arduous adventure and most (or all) had led physically taxing lives beforehand.   2.  The hardship of the trip itself somehow made them hardier afterwards.  I don’t find #2 very compelling, I must say.

I eliminate from the analysis the 3 crew members who died in war (Cheetham, McCarthy in WWI, Hudson in WWII) as well as Holness who seems to have been swept overboard on another voyage. For the rest, the life expectancy of men of their age and time was 63 years.  The crew’s average longevity was 71 years.  The age of the men at the start of the expedition ranged from 19 (stowaway Blackborow) to 45 (McLeod).  The shortest-lived survivor (aside from Shackleton) was ironically Blackborow (age 55), who also died of heart disease and the longest-lived was McLeod who lived to age 91.  Interesting that the youngest member lived the shortest life and the oldest member lived the longest.

Six men lived shorter than expected (Blackborow, Marston, McNish, Rickinson, Shackleton, Vincent).  One (Crean) lived exactly as long as expected (63).  The rest lived longer than expected.  If you have any questions, or would like any more detail, just let me know.  This was a lot of fun to do.  Thanks for stimulating me to do it.  I hope our paths cross again”. .

This sort of research and information brings history alive, making human stories rather than historical stories. Thank you sincerely, Steve.

The Expedition Team led the singing of Christmas carols this evening, before we sat down to the most magnificent Christmas Eve dinner. I sat with Paul Carter and 6 very interesting guests. Oil couple from Texas, psychologist from LA, travel/liquor journalist from San Francisco, Accountant from Vancouver. The journalist has judged at whisky expos where he may taste 60 whiskies in a day. Thankfully his next contract is a fortnight in Egypt, where his liver shall be given some respite.  We all swopped places half-way through the meal, and the laughter and banter was top-class. Shackleton whisky was discussed at length, along with the quality of Japanese whiskies today, past experiences on ships and the present scenario’s in USA and China. My story of specifically researching Polar Exploration with a view of getting onto these ships coming south creates much interest. A fantastic day at sea in every regard.

At 8.30 this Christmas morning, we approached Shag Rocks – tiny little islands protruding from the sea, and part of the Andes Mountains. Some 150 miles (240km) west of South Georgia, and 620 miles (1000km) away from the Falklands. Distances are huge hereabouts, and ships by definition move slowly. Birds were numerous around the ship, including Giant Petrels, Black-browed Albatross, Wandering Albatross, Cape Petrels, Antarctic Prions, and the odd Snow Petrel. Many Blue-eyed Shags which nest on Shag Rocks tried to land on the ship. Perhaps Cormorant would be a more appropriate name than Shag? A number of Humpback Whales added to the beautiful scene.

Photo Coach Renato Granieri gave a presentation on how to create award-winning images. Renato does much work with a Chimpanzee sanctuary in Uganda, raising awareness and funding via his magnificent images. He shared some of those images with us, along with images of birds which have garnered numerous awards. Knowing one’s equipment is as important as knowing the subject, but most important perhaps is patience. Renato is a master at under and over-exposing images, in order to create silhouettes, or really make whites white. Shooting in bursts gives one the best chance of a great image.

Just before lunch Father Christmas arrived onboard much to the Young Explorers’ delight. Every year I am asked to be Father Christmas. I have been extremely fortunate to be spared thus far. The suit is so hot, I am certain I will faint wearing it for any length of time within the confines of the ship, which I find warm regardless?  I fear I will not be so fortunate next year….We all bring a gift along as part of a Secret Santa plan. It was great fun handing out the gifts to members of the Team. Father Christmas moving along the corridors, greeting guests and handing out candy. Most wanted a photo of Father Christmas in the main lounge area, before he expired in his hot red suit, and vacated the vessel. Some of the Young Explorers asked for permission to use the microphone, and began an impromptu singing session much to the delight of everyone present. ABBA featured prominently. The competition has opened to spot an iceberg larger than the ship. First person to do so, and has their sighting ratified by the Bridge, wins a fine bottle of Champagne, compliments of A&K. During the afternoon, Antarctic Fur Seals and Macaroni Penguins have been seen swimming about the ship.

I told the story of Shackleton’s Endurance Expedition (1914-16). Given that we will arrive onto South Georgia in the morning, anyone with an interest in The Boss is dying to visit his grave at Grytviken. I mentioned the discovery of the stricken vessel Endurance, a century to the day of Shackleton’s burial on South Georgia-5 March 1922. Probably the greatest survival story of the modern age. Certainly the navigation from Elephant Island to South Georgia is considered an epic feat of navigation.

Humpback Whales in profusion delayed Recaps a little. Marine Biologist Rich Pagen explained to us all the importance and mechanism of the Antarctic Convergence and Divergence zones. Warmer currents meeting very cold water, and heavy, salty, brine laden water created by sea ice forming, sinking below lighter, fresher water created by ice melting. Expedition Leader Marco Favero outlined planned for tomorrow, to visit Moltke Harbour and Gold Harbour, which elicited whoops of joy from the Team. Gold Harbour is probably one of the most gorgeous spots in all of South Georgia.

A truly memorable Christmas day onboard Le Lyrial, as guests of A&K.