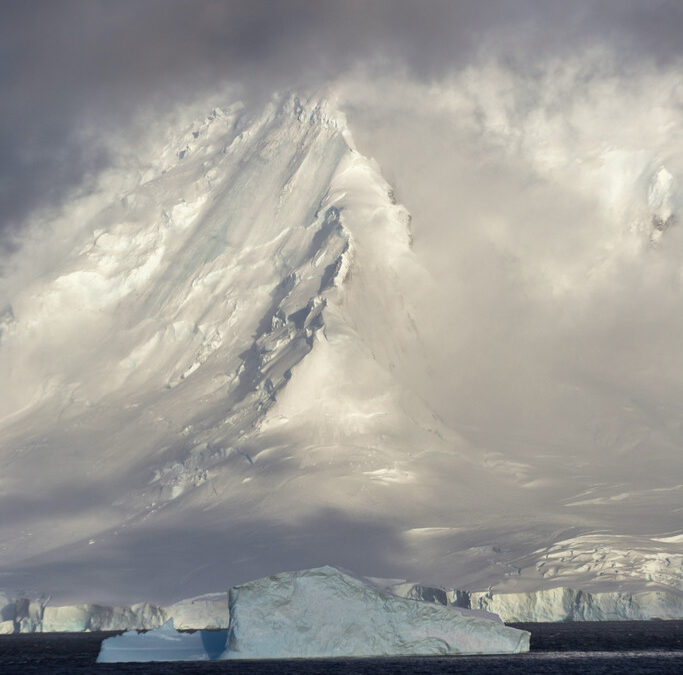 “The thing that is most beautiful about Antarctica is the light. It is like no other light on Earth, because the air is so free of impurities. You get drugged by it, like when you listen to one of your favourite songs. The light there is a mood-enhancing substance.”  These words from Jon Krakauer.
Russ Manning in his beautiful lecture today about his many seasons in Antarctica as a base commander, confirmed the best times for photography being sunrise and sunsets. Generally Krakauer is correct, the light here is simply staggering.

The Antarctic Peninsular is the northernmost part of mainland Antarctica. Beneath the ice sheet that covers it are a string of bedrock islands and mountains. Tierra del Fuego (Patagonia) is roughly 620 miles or 1000km away, across the Drake Passage.
The marine ecosystem around then western continental shelf of the peninsula has been subjected to rapid physical climate change. Over the past 50 years, the warm, moist maritime climate of the northern peninsula has drifted south. This has resulted in ice-dependent Adelie Penguins moving south, and the ice-tolerant Gentoo and Chinstrap Penguins taking over. Alterations in zooplankton and phytoplankton (krills’ food) and as a result changes in krill distribution. The most likely first sighting of the Antarctic Peninsular was on 27 January 1820, by an expedition of Russian Imperial Navy led by Fabian Gottlieb von Bellinghausen. The party never recognised it as mainland, but thought it was a lumpy ice-field. Seal hunters came next, but were very secretive about their movements and logbooks, to protect their hunting grounds. You may see the name Graham Land referring to the northern half of the Peninsular, and Palmer Peninsula referring to the southern half. We use the term Antarctic Peninsular almost exclusively.

Marco showed us a weather map last evening, and we are sailing into another major storm, moving eastwards. To have two major storm systems so close to one another (in time and distance) is very unusual. Seeing the massive snow deposits in Antarctica, and experiencing some rain, all point to major climate changes. Antarctica is the highest, driest, coldest, windiest continent on Earth. Let’s hope the mighty Circumpolar Current (which we are sailing against right now) continues to insulate Antarctica’s climate, and keep her that way. Certainly, at this stage Antarctica is faring better than the Arctic in terms of global warming.

We consider ourselves extremely fortunate thus far this season, in that some guests tested positive for Covid in Buenos Aires and were immediately isolated from other passengers. We have regular tests onboard, and have had a clean bill of negative results across crew, passengers and the team. Long may this last. Last night at Recaps, I spoke about Frank Wild – Shackleton’s second-in-command. Wild lost his rudder when Shackleton died in 1922, and moved to South Africa. Various ventures failed in South Africa, Zimbabwe and Zambia. He died on a mine outside Klerksdorp in August 1939, aged 66. Wild was cremated in the Braamfontein Crematorium, and his ashes disappeared from history. In 2007 they were found by Angie Butler, and taken in 2011 to be interred next to Shackleton on South Georgia. The inscription on the small granite plinth reads simply Shackleton’s Right Hand Man.

The restaurant on Deck 6 remains closed on account of the weather and sea conditions, which have definitely gotten worse during the afternoon. All outside decks remain closed. Hopefully we will reach Elephant Island by early afternoon tomorrow, and be able to launch the Zodiacs for an outing. This has been a very trying crossing indeed, struggling against storms, headwinds and the current.
We trust we will be in the Peninsular tomorrow afternoon…