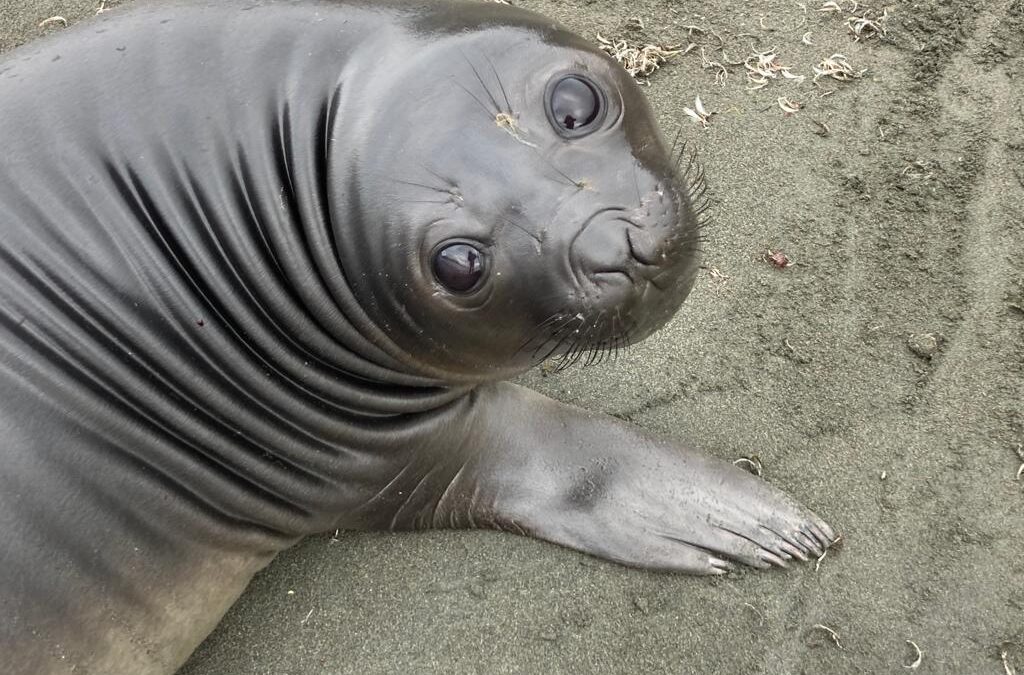 “South Georgia is for those who grew up dreaming of a Garden of Eden, where you walk unharmed among abundant and fearless wildlife in a beautiful wilderness – an oasis of serenity in a world increasingly out of step with Nature.” Tim and Pauline Carr, Antarctic Oasis, Under the spell of South Georgia. Like Antarctica, South Georgia really is an impossible place to describe adequately. Carr’s words above give some idea of the sublime past 3 days we have spent here.

Despite massive wind and storm warnings, and strong winds overnight, by 6am the ocean was calm and we could land unexpectedly at St Andrew’s Bay on northern coast of South Georgia. St Andrew’s is a massive flat expanse running up towards Heaney and Cook Glaciers. Mount Skittle overlooks the beach from the north. In sublime conditions we landed guests on the beach, amongst dozens of weaner Elephant Seal pups – quite easily the cutest animals in the world. With their massive brown eyes they approach to smell our boots and trousers. Older ones constantly knocked over our bucket of walking poles, and clambered all over our backpacks. The beach was a smorgasbord of wildlife, with seals, sea birds and penguins everywhere.
Photos really cannot do the experience justice. Many of the crew came ashore – for the cabin stewardesses it was their first landing, and what a special treat to see their faces approaching in Zodiacs. Skuas and Giant Petrels scrapped over a seal carcass and the sounds from the enormous King Penguin breeding colony never ceased.

Our cruise director is a powerful woman, and hales from Brazil. She feels the cold terribly, and is intrigued at my dress in these parts. On a recent landing (I was in shorts), she said I was the weirdest person she knows. Well, I responded saying that there are unpleasant connotations to weird, and that I would rather be referred to as eccentric. A bit like being called a control freak. She immediately agreed to being a control freak, and happy to be called that. Partly why I’d mentioned it. The whole team found the interchange hilarious, but are thankfully calling me eccentric rather than weird. Today, when we packed up the landing, and were cruising slowly along the breeding colony of King Penguins, there was much banter about not letting the truth get in the way of a good story. All aimed my way, of course. I spotted what I was sure was an Leopard Seal lying amongst the penguins. Leopard Seals always create huge interest, a bit like a Leopard in the bush. Bearing in mind that Zodiac tours had cruised along the colony en route back to ship, all morning, and nobody had reported a Leopard Seal. Well I was dismissed out of hand, until Patri, the ornithologist, stood up with her Swarovski binoculars and confirmed my sighting. We turned the Zodiac around and sure enough, a large, well-fed Leopard Seal very close to the waters edge. I had recognised the gape (smile) of this predatory seal. From a team who believe all I do is read history, and don’t know the difference between a cockroach and a Kudu, it was hilarious. Hopefully my street cred has improved a little in their view?

By the time we left the landing at St Andrew’s, it was raining. The winds increasing strongly in the open water, so we ship cruised to Stromness and Leith Harbours (whaling stations). By the time we arrived at 2.30, the winds were pumping at a constant 45 knots (75 km/hr) and gusting to 70 knots. With the white caps going crazy, and squalls across the surface, I spoke over the PA system about the history of both stations, and Jason Hicks gave some of the geology hereabouts. Stromness is where Shackleton’s hike ended in May 1916, after landing in King Haakon Sound on the N/NW part of South Georgia. Our sister ship, Le Astral, is here too, and watching her listing to port under the influence of the wind is impressive. The Captain has given precautions regarding sailing in bad weather. The storm warnings are correct, and we are departing tonight via the north of the island, to avoid even worse weather to the south, as we begin our journey to Antarctica. South Georgia has a very broken, erratic coastline, but roughly 140km long (N to S), and 20 to 40km wide (E to W). Along its spine runs the mighty Allardyce Mountain range.

As I was leaving the Bridge, the cruise director asked if I could possibly do a lecture this afternoon (to help fill time). I said with pleasure, so at 4.30pm I presented Amundsen – the Norwegian who took the prize. There were lots of questions, and nobody seemed inclined to leave the Theatre, so eventually I prompted them by suggesting if we stayed any longer, we would still be there at supper time. Thankfully that seemed to get them moving.
During the afternoon, all balcony partitions were removed on the ship, to protect them from the swells and wind. I am on Deck 5, and the amount of water and spray hitting my doors and balcony by 6pm was significant. Albatrosses outside are riding the wind currents as if they are on a Sunday picnic!

During the afternoon, some fresh goods were exchanged between ourselves and Le Austral. Since we haven’t changed our clocks to South Georgia time, and they had, we were out of sync by an hour. Marco said the poor Zodiac operators were so wet by the time the exchange took place, they may as well have capsized. The restaurant on Deck 6 is closed for dinner, so the team had dinner together on Deck 2. In order to expedite the process, we all ordered cheese burgers, which came quickly and we were able to move on. Marco and Patri had us in hysterics telling stories about their research in the 1980’s. Patri arrived on King George Island, rather green, and Marco reassured her that she was in good hands. They set up their red tent, but a Beachmaster Elephant Seal weighing about 4 tons woke up, and strongly resented the tent on his beach. He came for them as fast as an Elephant Seal can go, and even Marco leapt up, grabbed the tent and vacated the site. They then had 2 larger Scott-type bell tents. One evening they went 10 miles for a pizza night at a station and stayed over. They returned to find the tents, and everything in them, absolutely crushed by Elephant Seals. Marco said the tents were rendered completely unusable.

The door between the Bridge and my balcony has come loose, banging horribly against my sliding door. I went out to secure it, got sopping wet in freezing salt water, and can see why all outside decks are closed to guests until further notice! It is positively dangerous, and freezing. The ocean is heaving, as is the ship. Sometimes the ship on a downward movement meets a big roller head-on. The ship shudders from end to end, and I salute the construction of these vessels to withstand this sort of torture. I hope you are all sleeping soundly in your warm, stable, land-based beds…