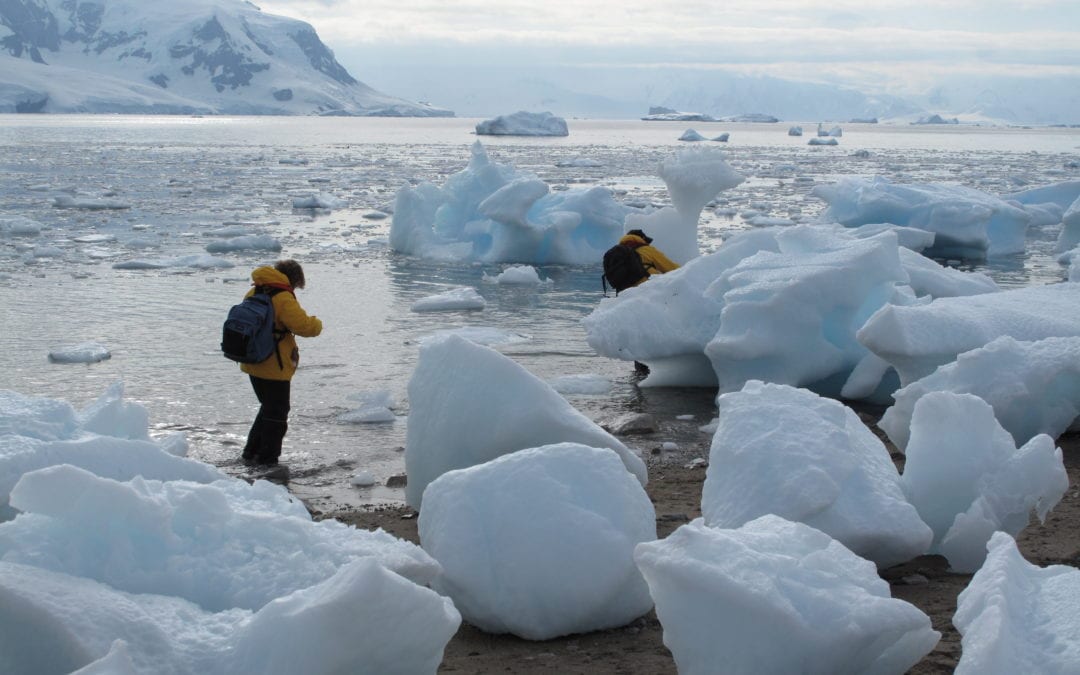 Last night was spent at rest, giving everybody an appreciated opportunity for a great night’s rest.
In January 1908, Shackleton wrote “Tongue and pen fail in attempting to describe the magic…” Never a truer word was written – the environment in which we find ourselves is absolutely indescribable. A strong northerly wind, and much ice precludes our entering the Lemaire Channel, unfortunately. This is one of THE most beautiful spots in the Antarctic Peninsula, but there are 3 massive icebergs guarding the southern entrance, and the idea of turning Le Lyrial and exposing her sideways to the wind in this narrow channel carries too high a risk. As if on cue, at 7am, a pod of Orcas was sighted near the ship, and the bridge officers skilfully kept us close to these gorgeous cream and black hunters of the deep. On occasions the animals came very close to the ship, giving us ample opportunity to photograph them, and marvel at their power and speed in the water. Incongruously, Gerlache named the Lemaire Channel in honour of Charles Lemaire, explorer of the Congo?

Two pointed peaks mark the eastern side of the channel entrance, somewhat inappropriately named “Una’s Tits”. Mountains and glaciers descend steeply into the sea, where Zodiacs were lowered, and guests taken on a Zodiac tour. A young Weddell Seal was seen, along with glacial calving accompanied by its mighty sound, not unlike distant artillery gunfire. The sun was out, and much blue sky, creating a very bright environment. Some of the glaciers look like fluffy, pure white meringue descending at leisure to the water’s edge. Sunglasses were obligatory, and it is very funny watching folks trying to take photos with sunglasses on, and even funnier watching them attempt to review the pictures on their screens. There is much glancing over the top of the glasses, much as an old history teacher would glance at one when you were in trouble. Only difference being that old history teachers don’t wear sunglasses. At the risk of sounding cliche’d, every day on this voyage has seemingly been better than the previous one, and if our guests hoped to finish their time in Antarctica with a grand finale’, this is certainly it.

A trip to the Southern Ocean would not be complete without mentioning krill. There are around 80 species of these crustaceans which resemble shrimps, of which 5 live in these waters. Krill gather microscopic food particles with their front legs, which forms a feeding basket, and swim with their rear legs. Their complex life cycle remains largely a mystery, but females can produce up to 10 000 eggs at a time. Without krill the ecosystem of the Southern Ocean would collapse. Now being used as human food, the very high concentration of fluoride in the exoskeleton demands that the shell be removed immediately to prevent contamination of the flesh beneath. High costs of harvesting and processing for a low value product auger in favour of the krill, which really is the mainstay of the Southern Ocean’s food chain. With these matters in mind, everybody is staggered at the quality and freshness of food on board. The Galley continues to serve magnificent fare all day long – they clearly perform magic with items like lettuce, fruit and other perishables. As one guest said, without a casino on board, what else is there to do, but think about food! Le Lyrial certainly is a gastronomic delight, sans krill anywhere on our menus, thankfully.

Moving northwards over lunch, from the Lemaire towards Paradise Bay, involved more calm water, blue skies, and reflections of arguably one of the most beautiful environments on Earth. Brash ice occasionally scraping down the sides of the ship. Seals hauled out on the ice scarcely batting an eye as we slide past. Le Lyrial is almost silent to us, and unusually smooth.
I called home on the satellite system, and had an incredibly clear line, having missed Karen yesterday. The fact that we have email connectivity and a telephone line, albeit expensive, from this end of the Earth beggars belief.

A glorious afternoon was spent at the old Almirante Brown Argentine base, now called simply Brown – the colour of the buildings making this abundantly clear. This base in Paradise Bay afford guests opportunity to walk up a steep, snowy slope, and slide down, along with viewing nesting Gentoos. On a sunny afternoon as it was today, the surrounding bay and mountains glisten. Deep snow made the hike more challenging than usual, but a huge proportion of our visitors made it to the summit – some doing it twice to enjoy the slide a second time.
Zodiac tours were then conducted too view Blue-eyed Shags nesting, before a surprise champagne stop. Many guests requested, being their last afternoon in Antarctica, if they could have champagne on shore. IAATO bans any such activity, so the alternative was arranged on a Zodiac, much to guests’ delight. It was after 7pm by the time the Zodiacs were recovered, everybody safely back on board. Many are feeling melancholic – this is it, their very last stop in this great White Continent. As so many have found before, “the little white voices will keep calling them back”.

Dinner was enjoyed with Antarctica bathed in gorgeous evening sunshine. In fact the light all day today has been unusual, great for photography, and utterly appropriate for these visitors last day here.