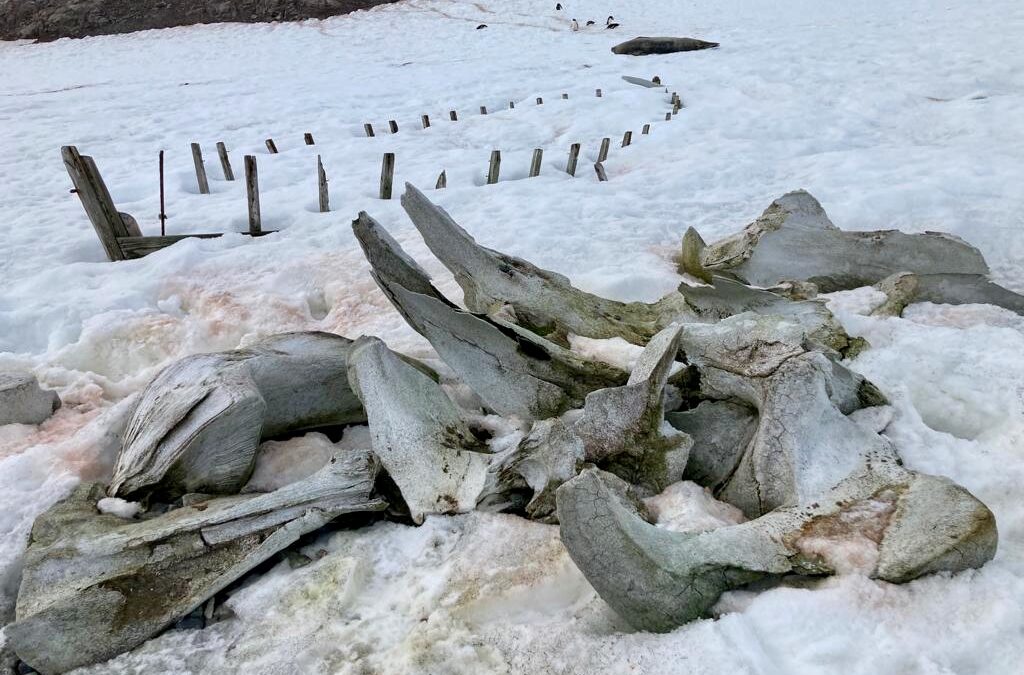 “We must always remember with gratitude and admiration the first sailors who steered their vessels through storms and mists, and increased our knowledge of the lands of ice in the South.”  Roald Amundsen, in my opinion the greatest Polar explorer of them all. The first to overwinter in Antarctica on Belgica (involuntarily), the first through the North-west Passage, the first to the South Pole, the first to fly over the North Pole and second after Nordenskjold through the North-east Passage. Only to die a tragic death searching for his arch enemy Italian Umberto Nobile in the Arctic Ocean, in 1928, aged 56. Disappeared without a trace, although the pontoon of his sea plane was recovered. A true modern day Viking.

Today we landed at Mikkelsen Harbour, with its large number of whale bones and old water boat. Named after Caroline Mikkelsen (Norwegian), and one of the first women to set foot on the continent in 1935. The approach to the landing is tricky on account of numerous submerged rocks. These drivers know the channel intimately and without hesitation took the scouting party in, 30 minutes before the guests. Plenty of brash ice prevented our landing, so we bodily pushed ice out of the way to clear a channel for landing.  Dry suits are extremely useful in these instances, which almost all the drivers wear as a matter of course. Weddell Seals hardly lifted their heads as we passed, Gentoo Penguins continued their activity in the breeding colony, and a young lonely Elephant Seal looked very out of place. Covered in fresh snow made Mikkelsen even more beautiful than usual, with mighty mountains and glaciers all around. The sounds of cracking ice pierced the air all morning. The wind was brisk and the temperature dropped whilst we were ashore. By the time we left the landing, the ocean was very choppy and we got rather wet returning to the ship. The French Doctor was on our Zodiac (she hates the cold) and was pretty soaked by the time we got back to the ship. I went for my weekly Covid test as soon as I got onboard, after beef consomme’, and noticed that the doctor was already in her ship uniform (a very speedy change of clothes indeed).

Over lunchtime we cruised past the most exquisite Antarctic landscapes, in sunshine, the wind dropping all the while. It is impossible to describe the scenery hereabouts, save to say that the lunchtime scenes are exactly what I imagine these guests signed up for. In terms of marine environmental protocols, we may not exceed 10 knots in this area (18km/hr) so the environment is sliding by gently, and can be thoroughly appreciated. A number of whales were spotted, including a Beaked Whale,  but none seemed keen to hang about and give us a good view of them.

During the afternoon guests were taken out for a Zodiac cruise in the picturesque Cierva Cove. Named for Juan de la Cierva, the Spanish designer of the autogiro, the first successful rotating wing aircraft in 1923. Go figure?!
There was brash ice as far as the eye could see, on a perfectly calm ocean, punctuated by larger icebergs. A more magnificent Antarctic scene is impossible to imagine. Today, during the Zodiac tour, the Young Explorers (under 18’s) were going to enjoy some Zodiac lessons. Kristin who is in charge of the Young Explorer program was selected to be one chaperone, and me the other. Russ and Mike were doing the instruction in two separate Zodiacs, and we had a wail of a time. The youngsters did extremely well at steering, going forward and backwards, their excitement levels growing all the while. Eventually after 2 hours, with 8 youngsters on our boat, Russ and I called it an afternoon. There was ice being recovered from the sea, and Russ was not keen on having his hitherto perfect record ruined with a child going overboard! We had the youngest on our Zodiac (one a girl of 7), and all their parents were waiting for us at the mariner when we returned. I was hugged by the Mum’s, who were ecstatic to see their offspring safely returned. Perhaps a Zodiac lesson amongst the icebergs in Antarctica, unaccompanied by parents, is somewhat novel? Once again, I skipped the Detox Tea. For the doctors in Hilton who sent a video of themselves smoking, drinking and relaxing today (being Sunday), please take note that I am not simply mincing about in the Antarctic (their words)!

Agus brought the house down tonight with a Recap on the Ozone layer, along with a song regarding Ozone. It was brilliant. I had dinner with two delightful couples. One from Mexico City, the other from Houston, Texas but originally from Mumbai, India who met doing their PhD’s in Atlanta, Georgia. The intellectual horsepower amongst the guests is high. We laughed until our stomachs ached, and were the very last to leave the dining room.