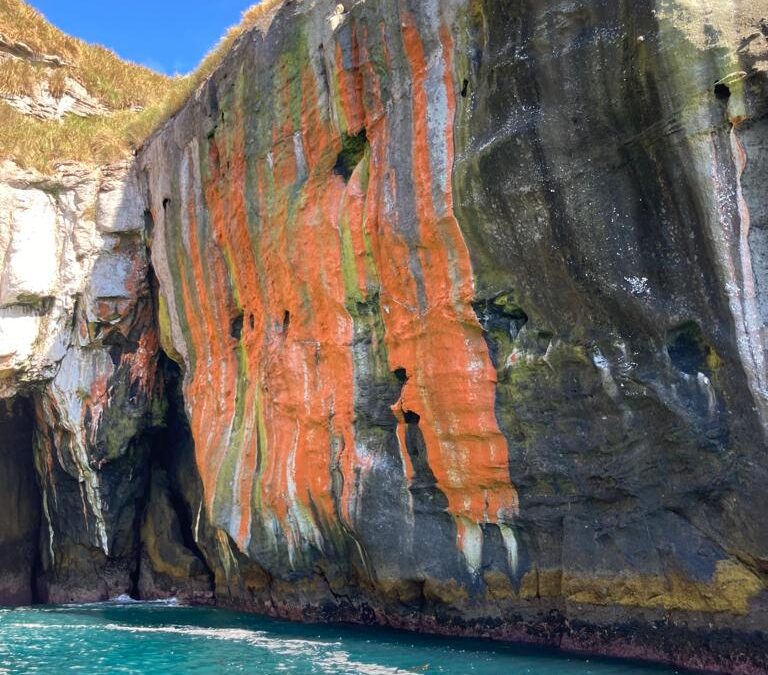 Thankfully the day dawned bright and blue. My cabin mate, a charming Australian called George Kennedy, expert on Geo-politics, experienced Expedition Team member and highly qualified paramedic, is also a very keen photographer. When we opened the curtains this morning a full yellow moon hung just above the water, before the sun rose. George surprised himself and I at his agility! He quickly dressed, grabbed his camera bag and raced up to Deck 10 to take some photos. George uses 35mm and medium-format film cameras, AND digital, so his excess baggage fees are large. He often gives photographic workshops onboard ships so carries 7 Nikon FE2 bodies around (35mm film cameras), 2 FM2 bodies, his Fuji medium format camera which he calls the Texas Leica (it looks like a Leica, only twice as big!), plus a digital DSLR body. It is fantastic to see someone still shooting so passionately on film. I pity our cabin attendant as George’s bed often looks like an amalgam of a second-hand photo shop and a whore’s handbag!

After the disappointment of a cancelled landing in Antarctica, and another on South Georgia, the guests have been asking about an activity at/on Tristan da Cunha. The settlement, ostentatiously named Edinburgh of the Seven Seas is not accepting any visitors on account of Covid, so we were restricted to an activity elsewhere, conditions permitting. Conditions proved favourable for a Zodiac tour in the lee of Nightingale Island. There are three islands in the group : Tristan itself, Inaccessible and Nightingale Island. We took the guests out in Zodiacs to view Northern Rockhopper Penguins, Yellow-tube Albatrosses, Brown Noddy Terns and the local Fur Seals with their yellow bib fronts looking more like otters than seals. The local folk have built a few little holiday shacks on the island, but there is no fresh water on Nightingale. Lichen of various colours provided the most magnificent canvasses on the rock faces. Ever heard about the moss and the algae who took a lichen to one another? Now their marriage is on the rocks! An old geology joke really.
Whilst Great Shearwaters, Skuas and Terns flew overhead we had the most enchanting morning. By mid-morning the swell running on the side of the ship was around 5 feet (1.5meters) which made loading guests via a side gate rather challenging. My Zodiac at one point dropped below the ladder, Gert shouted for the frogmen/deck hands to release the ropes which they did, and my Zodiac popped out like a cork on the rising swell. Conditions like these keep one honest, and the guests were quite nervous getting on and off a Zodiac rising and dropping 4-5 feet at the ladder! The Captain thankfully kept the ship drifting rather than on the anchor, and kept re-positioning trying to give us some protection at the side gate.

Tristan da Cunha was named by Tristao da Cunha, famous Portuguese admiral and navigator who discovered the group in 1507. da Cunha was a contemporary of Albuquerque who treated Fernao Lopes so dreadfully in 1513. Lopes would have his nose and ears cut off, then his right hand and left thumb in an atrocious punishment known as skinning the fish for having converted to the Islamic faith in India near Goa. Lopes chose to hide on St Helena en route back to Portugal to lessen the shame he would bring upon his family. Anyone interested in this remarkable story should consider reading The Other Exile: The remarkable story of Fernao Lopes by Abdul Rahman Azzam. Be warned it is full of brutality and cruelty. Fernao lived a dignified exile on St Helena for 26 years. Given British protection in 1816, when the British were terrified that the Tristan da Cunha islands may be used as a base from which the French may rescue Napoleon from St Helena. Heaven forbid he escape AGAIN, as he had from Elba. In 1867 Queen Victoria’s second son, the Duke of Edinburgh visited, hence the name of Edinburgh of the Seven Seas, for this tiny, remote settlement. Perhaps one of the most remote settlements on the globe. Duke of Edinburgh recently departed visited in 1957, on HMY Britannia.

In 1961 Queen Mary’s peak, an active volcano, erupted. With lava only hundreds of meters from the town, locals evacuated to tiny holiday homes on Nightingale Island, which we saw this morning. From there they were taken to Cape Town, and then to England, where they lived at Calshot near Southampton, in a road appropriately called Tristan Close. All returned to their beloved island in 1963. The volcano had not damaged the town in any way. Fishing is the predominant activity hereabouts. Until quite recently the potato was the local currency, and children poured out of the school to rush down to the waters edge when our Captain sounded the ship’s horn. I gave a talk on the history of St Helena and Tristan da Cunha, and unfortunately many guests got the two mixed up. I was asked umpteen times where the airstrip is. On Tristan flat land is extremely limited. Outside of the potato patches and vegetable gardens, along with some grazing for livestock there is scarcely place to park a Fiat Uno. I had to tell them diplomatically that the airport is on St Helena, 1510 nautical miles to the north.
This is our last port of call on this extraordinary journey from Cape Horn to Cape Town, and nobody can imagine my excitement at seeing Karen and loved ones in Cape Town..