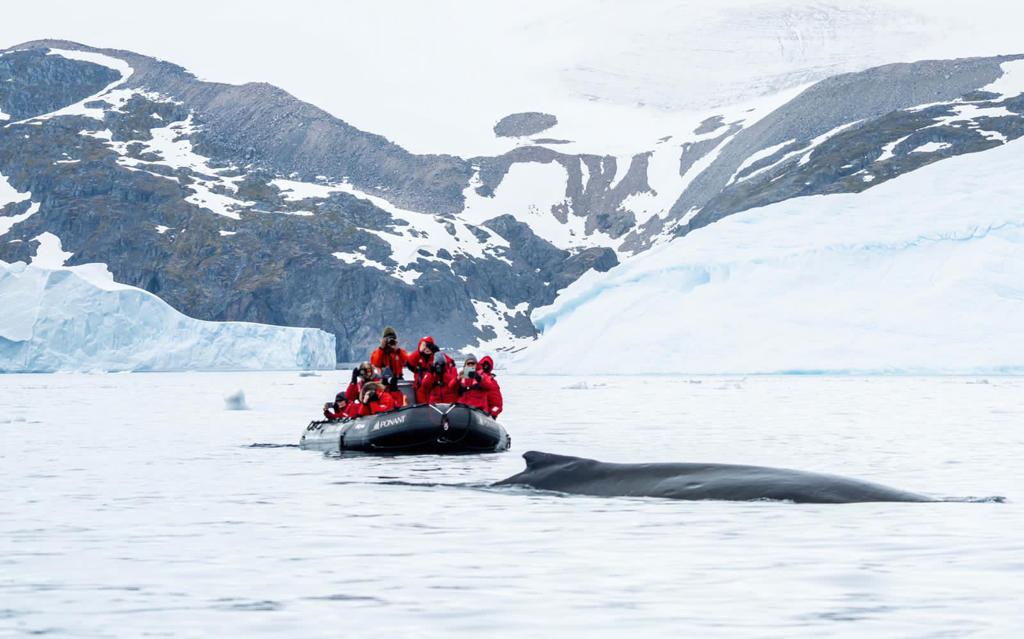 With the vagaries of Internet connectivity onboard, I sadly lost two days blog last evening. This type of inconvenience drives me crazy, so I am going to try and recreate what I had put together.
Steven Magee maintains that he wishes to visit Antarctica before global warming turns it into a tropical paradise. Rather a dramatic thought, but weather over the past two days would support his thinking. We have enjoyed two balmy, sunny days, which we have called Burton Days, after the death of our esteemed, popular colleague Bob Burton. Guests love the sun and warmth – the environment and ice does not. So much so, that it is becoming ever more difficult to find multi-year sea ice.

We took a Zodiac cruise in the Antarctic Sound, named after Otto Nordenskjold’s ship. The ship under the command of Carl Anton Larsen (of whaling fame) dropped a party of men off at Snow Hill Island, under Nordenskjold in 1902. Upon returning to collect them, was thwarted by ice, so dropped a party at Hope Bay, whilst going around top of Peninsula hoping to get to Snow Hill in 1903. The ice beset the ship off Paulet Island crushing her, 25 miles offshore. Larsen and the others made it to Paulet Island for a fearful winter, losing a man. It is a survival story in much the same vein as Shackleton’s. All eventually were rescued in November of 1903, at a place appropriately called Cape Well Met!
Guests were ecstatic to be taken amongst the icebergs in Zodiacs, classic Antarctic landscapes all around. Depending on conditions, wind and swell, we load 6/8 or 10 guests plus driver into the Mark 5 military specification Zodiacs with 60 Hp Yamaha four-stroke engines. These engines are very fuel efficient and reliable. I have worked for a company who use 36 Hp diesel motors, which will not pull a cowboy out of the saddle with a run-up! On a sunny day with blue skies a more exquisite scene in the world is impossible to imagine – Antarctica, not the cowboy and 36 Hp motor!

The afternoon was spent at Brown Bluff. A “proper” Continental landing and important to all those wanting to tick off their 7th continent. The penguin chicks have grown exponentially since our last visit. They need to in this very short summer season. The Gentoo chicks are grey and white, much like their parents. The Adelie chicks are dark grey from head to foot, looking like so many balls of grey fluff. Poor birds were lying on the ground, panting, on account of the warmth. I was in shorts and shirt, and eventually took cover in the shade offered by the lee of some big rocks. Large numbers of penguins were coming ashore and walking/marching along the water line affording viewers much pleasure and interest.

Next outing found us landing at Mikkelson Harbour, with its water boat, whale bones and penguin colonies. Chicks much smaller here than those we saw at Brown Bluff, and many may not make it to adulthood, sadly. The very low tide posed problems for the Zodiacs coming in and out – the approach is very shallow with plenty of dangerous rocks. Last time we were here, we had to clear many large blocks of ice to effect a landing, nothing today. One of our guests is an accomplished ballerina. I asked her to stand on a whale vertebra and show us some ballet poses. Nicola did this with distinction, much to the photographers’ delight. Nicola asked for more warning next time that she could do some stretching exercises beforehand!
I explained about the water boats collecting fresh water and ice for the steam engines on ships, along with the men’s needs. Whaling was a very wasteful process initially, only the blubber harvested, the remainder abandoned. These whale bones a reminder of that wastage. The surrounding glaciers calved regularly on account of the heat. We could hear the ice cracking on the slopes, sounding like artillery. During the landing a decidedly icy wind got up, ensuring we don’t forget just where we are.

During the afternoon, our guests were taken on a Zodiac tour in Cierva Cove. We have onboard a couple who travel regularly with A&K, the wife in a wheelchair. I am not sure of the issue, but it was decided that they were being taken on the Zodiac tour too. I was ‘voluntold’ that I was accompanying them, since my whisper is audible at 50 yards, hence would be easy to hear! We had a lovely tour amongst massive icebergs, and found a beautiful Leopard Seal. The penguin colonies, with chicks learning to swim, provide abundant food for these predators.
In the middle of Recaps, the Captain received a phone call informing him of a Medi-evac required immediately.
Guests given options for questions, asked for a Zulu War talk from me (yes, you read correctly:Zulu War), so I am doing one tomorrow.  We are now steaming back to Ushuaia a full day early. Quite a shock for all of us; two Medi-evacs in 4 cruises when we haven’t effected one in 4 seasons is most unusual. We all went outside with a drink to toast Antarctica, and fervently hoping we will be back again. A rather emotional moment, with Bob’s passing, Pete (73) from Falklands feeling things weren’t quite right yesterday and that he may not return to Antarctica again, and our dear friend Larry struggling cancer. Our ship family as we call it has taken some big hits, which affect us all powerfully. We refer to whales as Charley’s in memory of our dear friend Charley not long gone, also from cancer. We also miss our 3 New Zealand friends who cannot travel given Adhern’s island mentality. I wonder how their Tourism sector feels about two complete seasons lost thus far, and counting?

18 January At Sea heading North
After the shock announcement last night of a Medi-evac being required, the Captain turned Le Lyrial around and began our trip back to Ushuaia, post haste. Word about the ship is that a crew member has a hand which has turned gangrenous, and if not treated immediately he may lose his hand. Marco showed our guests the weather in Antarctica at noontime today, with winds at a constant 50knots (90km/hr), so it is unlikely that we would have been able to conduct safe operations today in any event. Still the shock of returning to Ushuaia a full day early takes some adjusting to.

This morning I gave a lecture about the background to the Anglo-Zulu War, and the battle of Isandlwana. Almost everyone had no idea about this history, and no reference point whatsoever. The Theatre was full, and everyone thoroughly enjoyed my presentation given without images. Tonight at Recaps I spoke about the Shackleton whisky found beneath the Cape Royds hut in 2007, and the blending of a matching whisky for sale today. Part of the sales revenue is donated to the Antarctic Heritage Trust in New Zealand, who maintain the huts on Ross Island. Patri followed me with her hilarious Red-jacket Albatross presentation. We had arranged that I would leave my stick on stage for her to use, but as I left the stage Patri took my note book from me. She used the note book and stick doing a spiff of me, which brought the house down. Quite inimitable is Miss Uruguay, Patri Favero!

We are due to arrive at entrance to Beagle Channel around 1pm tomorrow. Pilots are in short supply due to Covid, but we have secured a Pilot to navigate Le Lyrial down the Beagle Channel to Ushuaia. We await word from the authorities regarding what we may and may not do, in a bubble, to entertain our guests until departure by charter flight back to Buenos Aires. God and Covid-willing I fly to Santiago, Chile on evening of 21 January, to quarantine in Punta Arenas before I join Silversea for a voyage back to Antarctica, ending in Cape Town on 24 February.
I hope you have enjoyed these scribbles from the south, which by necessity will tail off considerably now. Your support and interest has been most appreciated, thank you.