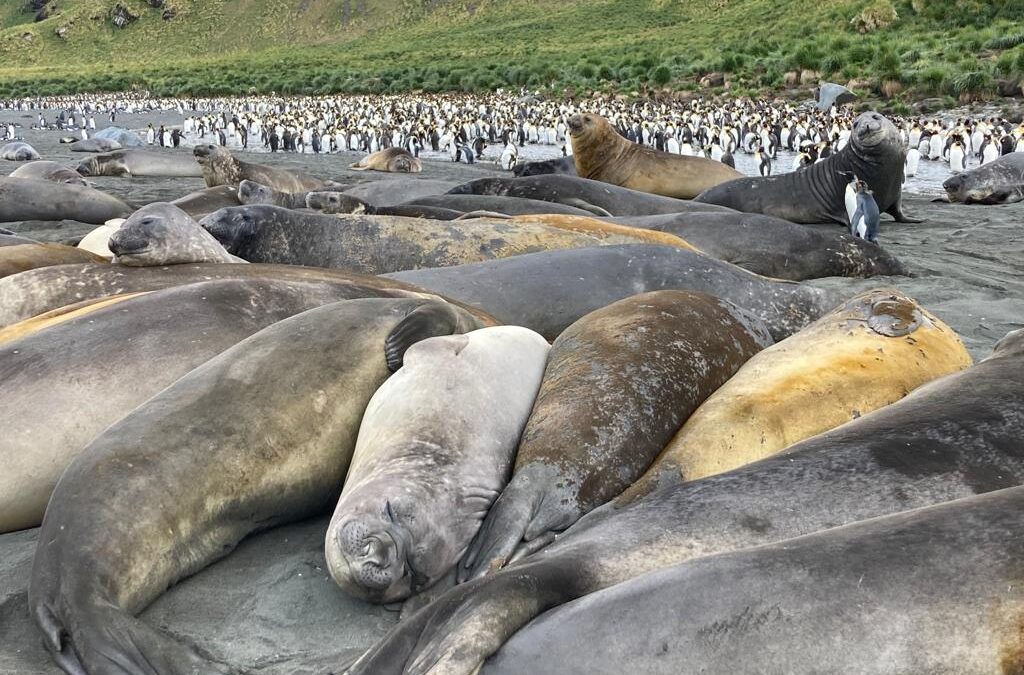 “But who wants to be foretold the weather? It is bad enough when it comes, without our having the misery of knowing about it beforehand.” – Jerome K. Jerome ‘Three Men in a Boat”
We discuss this often, the massive advantages of accurate weather/wind forecast in terms of one’s planning versus the anxiety of knowing what is coming! On short Polar itineraries like ours, there is no doubting the necessity of accurate weather forecasts, which can literally mean high winds in one bay, and calms seas in another only 3 miles away. Tuesday was a case in point – heavy snow in Stromness, beautiful weather in Moltke Harbour only 30 miles to the south.

Yesterday we visited one of our favourite places in all of South Georgia – Gold Harbour. With its surrounding mountains, hanging glaciers and abundant wildlife, it really feels like a Garden of Eden. Elephant Seals by the dozen, some jostling with one another, but largely lying around, at times even climbing on top of their companions for a more comfortable spot. A large colony of breeding King Penguins, and smaller colony of Gentoo penguins. Other seabirds overhead, attending to nests on the slopes and cliffs. It was a beautiful morning and large numbers of crew, including the Captain, joined us ashore. It is wonderful to see young Philippines, Argentines and French walking around in wide-eyed wonder at the bounty Nature has laid before them. The few Fur Seals present were not aggressive, so the crew were far more relaxed walking around. The Fur Seals tend to focus the mind a little on their breeding beaches. Geologist Jason Hicks is a chocolate fanatic, and NEVER shares his chocolate. In a rare act of kindness, he shared some chocolate with me, and I got a photo of the two us reflected in the nurse’s huge goggles. Jason has an unusually high IQ, and keeps the team in hysterics with his unusual utterances and superlative lectures (those that we can follow). Always ready to try something new, Jason got his heavy truck licence, and was doing some long runs on icy roads in America. In time he realised that he was more than likely working for the Ukrainian mafia and moved on from truck driving. Whilst we waited for guests to return to the landing, JJ told me some hilarious stories about Zodiac driving in the Amazon. The current creates difficulties in terms of hooking up one’s Zodiac for loading. On one occasion JJ  twice attached the painter line to his Zodiac, and it popped loose. On the third, he simply grabbed hold of it and held on. Well, the painter line has a thin rope attaching it to the rear of the ship which JJ forgot about. As the lines drew taut he was catapulted out of the Zodiac by the thin secondary line. The ship was already moving, so the Bosun sent down the Bosun’s chair (a bit like a kid’s swing) and JJ sat on it, having deployed his CO2 life jacket. As he was being bobbed along in the Amazon his shorts came off. When he was safely back onboard, Sally said the moon had risen! On another occasion, Sally was struggling so with the current to hook up her Zodiac, that she radioed the Captain, asking him to slow down, to which the Captain replied that they were still at anchor! Current.

In the afternoon, we visited Cooper Bay at the southern end of South Georgia for a Zodiac tour. Highlight for the bird watchers and photographers were the beautiful Macaroni Penguins, whose numbers are sadly in steep decline. Some postulate that this is as a result of food competition with Fur Seals and others for food : Krill. I am not sure whether burgeoning numbers of Skuas which take a heavy toll on eggs and chicks are not also partly responsible, but I am not a biologist? We watched kelp attached to the rocks, moving with the tide, looking like a mass of snakes. We were lucky enough to see ALL 4 species of Penguin found on South Georgia -King, Gentoo, Macaroni and Chinstrap. By the end of the first tour it was drizzling hard. I left the Zodiacs to prepare for my Amundsen lecture, which was thankfully very well attended
Our time on South Georgia has been outstanding, and the team let their hair down a little last evening. This is the 4th and final voyage of the A&K season. We have a two-day crossing to Antarctica for 3 days, then two days back across the Drake to Ushuaia.

We are steaming south-westwards towards Antarctica, the usual series of lectures and entertainment taking place. I have mentioned them before, but the musicians onboard provide fantastic entertainment daily. We all tease Ievgeniia about not letting water pour into the main lounge again, after a rogue wave swamped the lounge whilst she was singing. She smiled graciously for a photo last evening. Elena Koraneva is a brilliant pianist, and I have no doubt that she will move on to higher echelons of music after these travels. A South America duo play the harp and sing. Natalia, Elena and Ievgeniia all have smiles which light up the room. Skills which I stand in awe of. I am usually told not to sing at weddings lest I ruin the video!

The requirements for my next contract with Silversea have been challenging given Omicron Covid and my embarkation port being switched from Ushuaia, Argentina to Punta Arenas, Chile. Karen back home has been simply amazing, as always, with these matters, and Arthur onboard has assisted with scanning/printing on my behalf. Without Karen’s assistance I would be heading home without question. God and Covid permitting, I will sail into Cape Town with Silversea on 23 February, having done the famous “Cape to Cape”. This trip will take us through Chilean Fjordland, Cape Horn, Antarctica, South Georgia, Tristan da Cunha and finally into Cape Town. Who would ever have thought?…