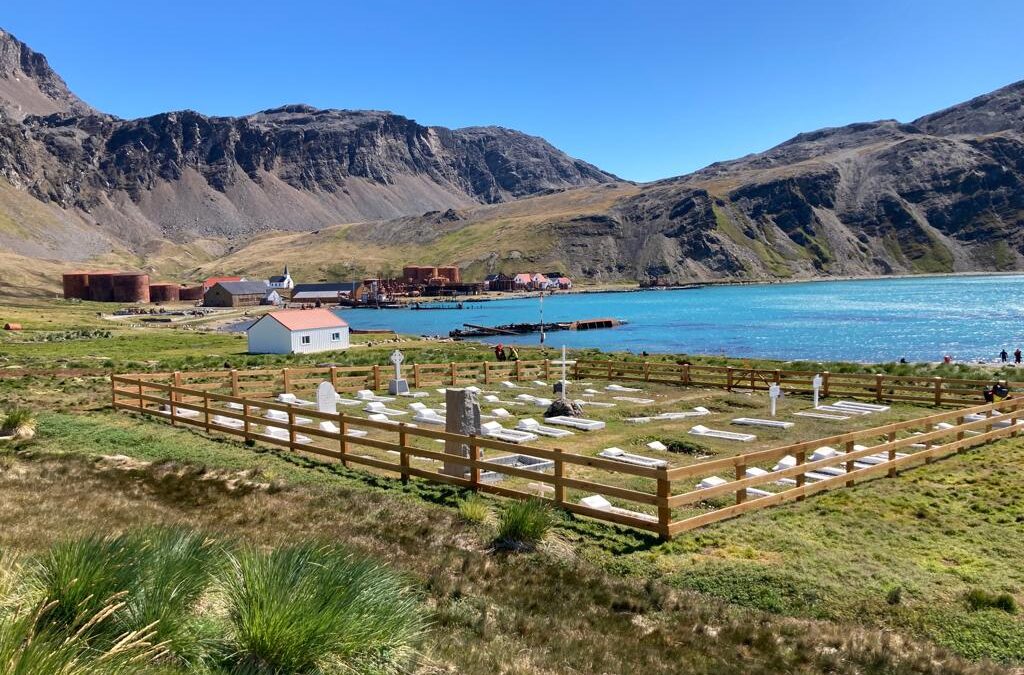 Ten years ago exactly I recall vividly my first visit to South Georgia. As an absolute greenhorn, sharing a cabin with another rookie (American ornithologist), we jumped up to look out of the cabin window. The ocean was a wild tempest, the Captain was steaming up and down the coast on a small ship (Hapag-Lloyd MV Bremen), and we could see grey mountains through the squall. To say it was intimidating would be an understatement in the extreme. We were dying to go ashore, but there was no chance whatsoever that day, my cabin mate was as sick as a dog, and we were being shown very clearly that Nature is in charge down here. I have been fortunate enough to return to the natural wonder of South Georgia often since, and appreciate the vagaries of the weather hereabouts. Massively affected by the Circumpolar Current flowing around Antarctica, and the violent winds associated with Antarctica, South Georgia has a windward side (SW) and a leeward side (NE). All the early whaling stations (1904 0nwards) are situated on the leeward side of the 140 km long island, for obvious reasons, and that is the only side that passenger vessels attempt to visit. Never mind the winds, swell is also an important consideration, so much so that Zodiacs often land stern first. The bow tends to cope better with swell than the transom/engine end of a Zodiac, and waves don’t need to be big to fill/disable a Zodiac. Getting elderly, less than confident guests off the stern end of a Zodiac with a strong swell running certainly validates our intake of oxygen on that particular day! With sopping wet, cold boots, freezing hands and the energy-sapping repetition of wrestling with the Zodiacs, we earn our pay.

Fog and wind prevented our third landing in the Antarctic Sound. We had the wind and swell in our favour (all from the stern) as we made the 3-day crossing from the Antarctic Peninsular to South Georgia. Prior to arriving at South Georgia, I was asked to give my Shackleton talk, particularly since this island featured prominently in supplying the expeditions, and Shackleton died here on 5 January 1922. During the previous evening Shackleton had not felt well, and his surgeon friend Alexander Macklin spoke to Shackleton about diet, drinking, exercise, smoking and the depredations of his earlier expeditions. This, I have found, is a common dialogue between doctors and their patients. Sadly, Shackleton died of a massive heart attack only hours later, aged 47, and is buried there. Today we arrived at Grytviken (Pot Harbour), the administrative centre of South Georgia in THE most glorious weather. Some cloud in the blue sky, not a breath of wind, mirror-calm sea and the ambient temperature around 4 degrees Celsius. For various reasons we took the guests on a Zodiac tour of Cumberland Bay. The vast array of wildlife present here during our A&K visits has diminished completely, but we saw King Penguins, Fur Seals and Elephant Seals along with many bird species.

The lack of knowledge around whaling was intriguing. I went into detail about the exploding harpoon heads developed by Svend Foyn, and that whales had to be pumped with air to stop them sinking once dead. The Southern Right Whale was so named since it is slow, and yields very high levels of oil. It also does NOT sink when dead hence being the RIGHT whale to kill. Initially only the blubber was harvested, an unusually wasteful process. Eventually the bones too were boiled for their oil, then dried with the entrails, tongue, etc and ground up as fertiliser. The flensing knives are fearsome. Looking like old-fashioned hockey sticks, except the end is a 35cm long, razor-sharp blade. Many accidents took place with overly zealous men cutting up whales and would injure another workman with the flensing knife. The longest Blue Whale processed here measured 32 meters, and weighed 100 tons. The tail hook alone which pulled the whales up onto the flensing pan, via steam winch and cable weighs 1,5 tons. At the height of the whaling period (1920’s/1930’s) 2000 people were living at Grytviken, and a large whale would be processed in 30 minutes! Carbon based petroleum products saved the whales but not before 170 000 cetaceans had been slaughtered.

This unusual itinerary takes me across the Atlantic from Cape Horn to Cape Town. Unfortunately Tristan da Cunha is allowing no ship visits at present on account of Covid. We hope to ship cruise close to the islands in that remote archipelago. We bunkered fuel in Punta Arenas, Chile and I am very relieved not to have been responsible in any way for that bill.
We plan to go ashore at Fortuna Bay, and view the huge King Penguin colony there. Sadly many guests will not manage the 2km walk between the landing site and the colony, but can see plenty of wildlife wonders along the beaches. South Georgia really is an Eden, now that all alien creatures have been dealt with, particularly the rats and mice.