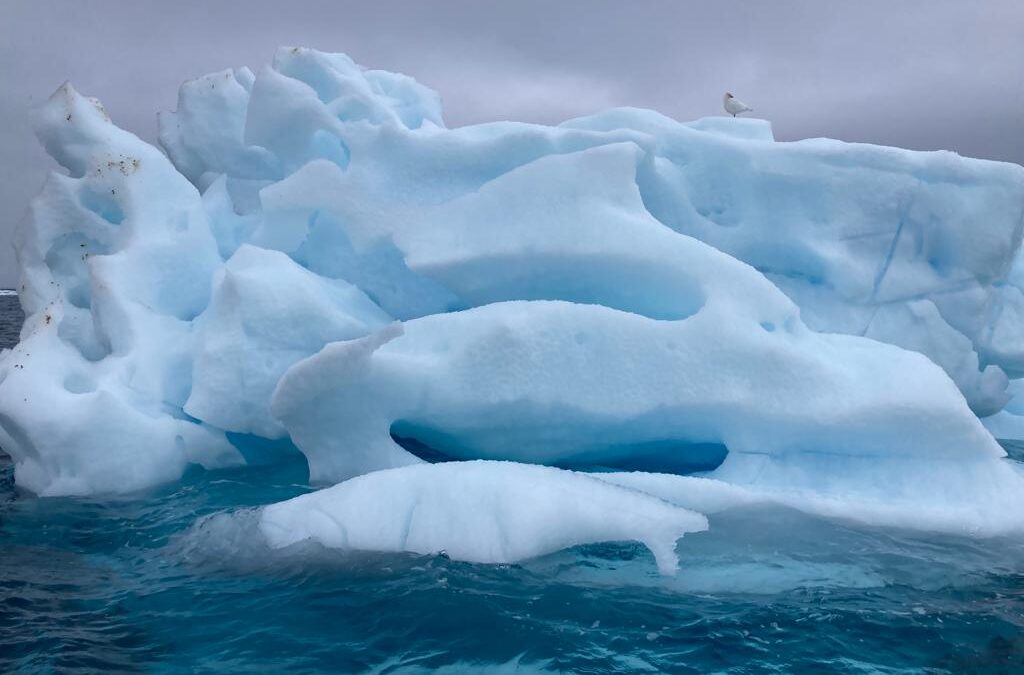 “Hope smiles from the threshold of the year to come, whispering, ít will be happier’.” – Alfred Lord Tennyson. After the past two years for so many, I presume many are hoping for a considerably better/happier 2022.

After failing twice to launch the Zodiacs yesterday afternoon, and a very rough, slow crossing from South Georgia, our New Year began happily and auspiciously in the Active Sound. We began with a Zodiac tour in the vicinity of Joinville Island.
Lots of brash ice, growlers and irregular icebergs off a massive Adelie colony. These birds make incredible journeys up the very steep, high face of a mountainside to breed. We could see them at the summit, and countless birds ascending the slopes tangentially. A Leopard Seal was patrolling the shoreline; the birds waiting in numbers to finally take the plunge as a group. We slowly cruised along the shoreline, contemplating New Year, where we were, and just what a privileged position we found ourselves in. Amongst the thousands of Adelies, we found a few Gentoo penguins, and even the odd Chinstrap. The ambient temperature was -1C, but felt much colder with the wind chill on a Zodiac. A cup of hot beef consomme’ went down extremely well upon returning to the ship.

As the ship re-positioned over lunchtime, we passed many spectacular tabular icebergs (these break off ice sheets and have a regular flat top, hence the name). Lunch today comprised the southernmost barbeque in the world. The team ate together downstairs as space is limited, but we could order a mixed grill from the braai. We learnt with great alarm that the salted butter is finished, along with potatoes. There were sweet potatoes available, and French Fries – after all it is a French ship! There must have been a glitch with the re-provisioning, as there are plenty of apricots, so a large number of apricot dishes are on offer. Perhaps apricots and baby potatoes look similar when bagged? Many of the team were mixing unsalted butter with some salt at lunch, and I can see this becoming a regular thing at mealtimes.  Our charming French waiter, Clement, found it all as amusing as we did. His calm when stating there were no potatoes smacked of British understatement. Learnt perhaps from his British partner onboard.

The Active Sound is roughly 2 miles wide on average, and runs off the Antarctic Sound in a NE direction. This sound was named after the ship Active, belonging to a Dundee whaling expedition in 1892/3. The much larger Antarctic Sound (56km long and 13-22km wide) runs across the Antarctic Peninsular, separating the Weddell Sea from the Bransfield Strait. Famous for its icebergs which are pushed here by wind and current out of the Weddell Sea. The Antarctic Sound is named after Nordenskjold’s ship Antarctic (1902/3) – a remarkable survival story I have explained previously. The icebergs are a constant source of fascination. No two are alike, and the sculpted formations, particularly on the glacial bergs, are magnificent. As are the various colours, from absolutely translucent to white, all the way through to dark blue/almost violet.

The afternoon was spent landing at Brown Bluff, an Antarctic Continental landing. It was cold enough to freeze the tits off a tin cow, with driving snow all afternoon. The guests were offered two hours ashore. None of them came close, there was a red tide as they poured back to the Zodiacs to be returned to the ship. Despite nesting Adelie and Gentoo Penguins, with their cute, grey, downy chicks, true Antarctic weather won out this afternoon. After the beef consomme’ of this morning, there was detox tea on offer. Now for someone who considers chicken salad, it was not worth stopping for. Detox Tea?!

As I pen these few lines, it is snowing hard outside the windows, and the icebergs look almost surreal. I have kept thermal underwear on, and made coffee whilst I write a blog. The cabin looks like a Chinese laundry as clothes hang out to dry. Between the snow, and a choppy wet Zodiac ride back to the ship, our outer layers got rather wet. Upon arrival at the ship, we need to offload and store the safety gear, along with cleaning the walking poles and flags. For every landing we take food, water, stoves, blankets, tents, etc ashore, in case the weather changes and we cannot get back to the ship (safety gear). We clean boots, tripods, flags, walking poles etc with Virkon bactericide after every landing, that we do not spread disease from one landing spot/colony to another. One also tries to avoid any guano finding its way onboard, from an olfactory perspective. Today, extra ballast was loaded into the box in the front of each Zodiac (2x25lt water drums), to keep the nose of the Zodiac down when empty. Also two people go to place the Zodiac on the lifting hook, from a safety aspect. The Zodiacs are lifted by crane to Deck 2 (where drivers alight via a shall door in side of ship), and then continue to top of ship where they are stored/stacked. The potential for accidents during this operation is high.

At Recaps JD perfectly recited Herbert Ponting’s poem about the reindeer skin sleeping bags. It involves the fur side, and skin side, the inside and outside, and is a serious feat of memory. I sat for dinner with a special family, whose teenage boys wanted to know about storytelling and some of my life’s experiences. Extremely different from theirs, the younger son of 14 has been to ALL 7 Continents. We are travelling in waters filled with ice, so cannot use the stabilisers. The ship sways from side to side very strongly, as we head with intent for the Gerlache Strait in the morning.